Yes, I know…we just got back from a whole week at the beach with the grandparents and it was fantastic.  It was fun, and joyous, and tiresome, and mildly irritating in the ways that I imagine typical family vacations are.  For us this was certainly the case and believe it or not it was a refreshing change.  Rob on occasion has finally been able to become the typical 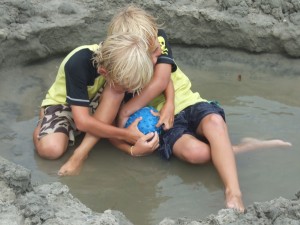 older brother to Quinn.  We witnessed our first horrific fight on the beach.  Quinn took a football from Rob, wouldn’t let go. Rob won it back and Quinn took it again.  Well, Rob decided the best way to deal with him was to start kicking sand at him furiously.  It was on his face, in his eyes, all over his hair and in his mouth.  SUCCESS!!!!  We have fighting!! This was a pipe dream when I posted my good old Norman Rockwell post a few months ago.  Progress. This is progress. (don’t worry…Rob got a time out and was getting ready to be taken back to the house after he threatened to beat Q with a sand shovel, but then apologized very quickly)

We had a great trip.  Lots of memories.  Frolicking even.  I managed to catch a picture of both my boys flying kites on the beach with a rainbow in the background.  It was beautiful, serene and brought tears to my eyes. 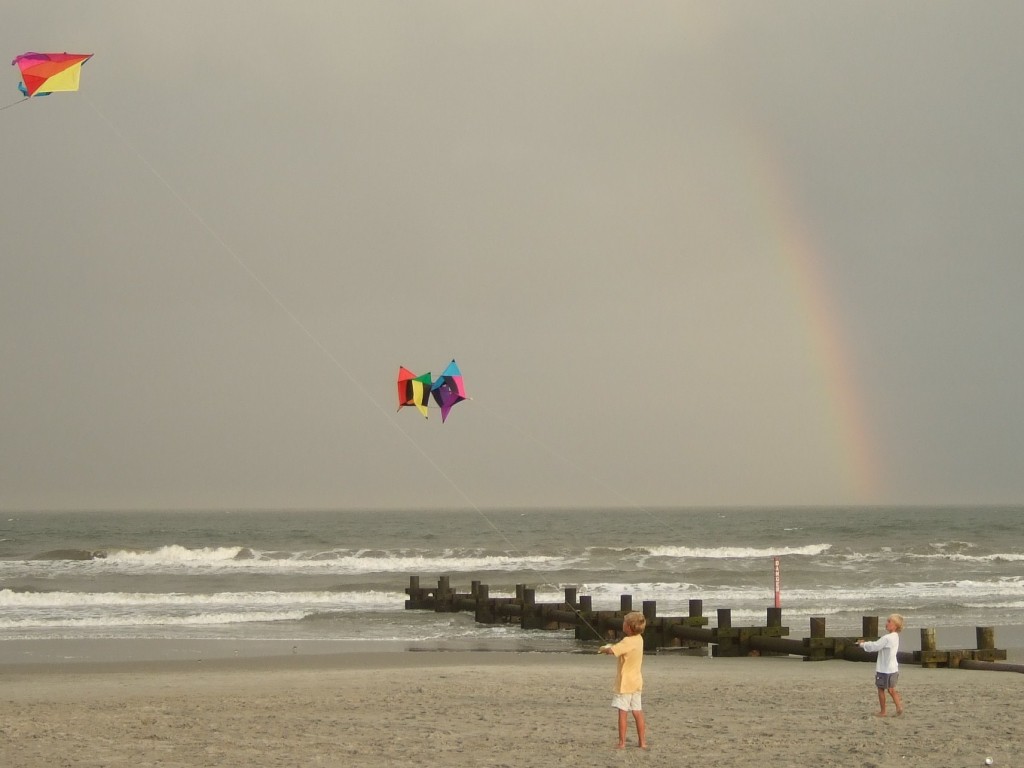 So why am I so desperate to be back on the beach today??  Greedy one I am…right? Well, today is the Surfers Healing event in Ocean City, Maryland and it is the most magical day on the beach that any child with autism could ever experience.  Their parents too for that matter.  Rob has had the privilege of experiencing Surfers Healing both at Virginia Beach and in Ocean City, MD and I can tell you first hand that this organization provides the most amazing recreational camp imaginable for kids with autism.

So WHY are we not going you ask?  I could make up a laundry list of excuses why it didn’t work out this year but the fact is there is only one reason.  I didn’t sign up in time.

I had the sign-up date set as an alarm on my phone.  My husband had it programmed into his calendar.  But here’s the thing… the two 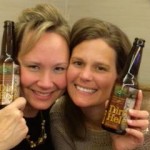 of us were in Chicago for a weekend getaway to celebrate a good friend’s birthday.  While we where there we were lucky enough to meet up with the lovely Rev and her equally amazing husband who we easily could have spent days with talking shop. We had a blast.  We caught a Cubs game or two, were out on the town and basically dropped the ball on this one.  We did.  Sucks.

So what is so special about Surfers Healing anyway?  The answer is:  Everything.

Our first experience with SH was in Virginia Beach two summers ago and we truly had no idea what to expect.  All we knew was that everything was ‘taken care of’ by the SH organization.  Let me tell you, this is an understatement.  Not only is there no fee to enroll in camp, SH provides lunch and snacks for the surfer and their family.  All four of us were given shirts and Rob got a goodie bag full of surfing stickers, a hat, a water bottle and other interesting trinkets.  They had crafts for the kids, and generally made the day at the beach wonderful. We hadn’t even begun the surfing part yet!

Rob had a late surf time, so we were able to sit and watch some of the other surfers take their turn with the pros.  When it was time to surf, 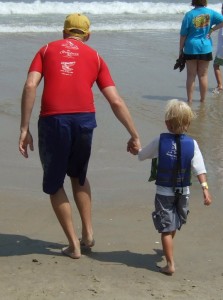 each surfer got a life vest, hugged their mom or dad and got escorted down to the water by one or two of the many volunteers who turned out that day to help.  Every single person who was there helping had a warm smile on their face and endless patience with the kids.  It was amazing to watch how kind, gentle and caring these men and women were.

Down at the water, the kids were introduced to their surfer and were helped into the ocean and onto the board before they paddled out to 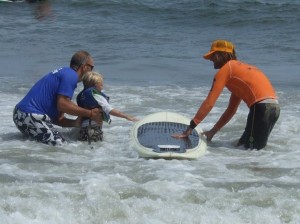 the surf.   Then the surfing began!  These professional surfers rode in wave after wave with the kids on the custom boards made for Surfers Healing.  The kids were either lying down or the surfers helped the kids stand up if the kids were comfortable enough.  It was awesome to watch, and tears streamed down my face more than once during the day as I watched parents cheering on their kids, or the kids of complete strangers for that matter.  More importantly I cried as I watched the smiles on the kids faces as they emerged from the ocean completely proud of their ride.

During lunch the surfers took a break. They sat under the tents set up for them, played the ukulele and sang.  Kids began to wander over and they danced with the surfers and sang along and you could see that these professionals were having just as much fun as the rest of us were.  Every person on that beach felt a bond. The bond was love. You could feel love everywhere along that shoreline, from the kind volunteers helping a sensory defensive child into a life jacket to the parent who ran to the MC waving a pair of goggles when it was announced that one of the other surfers wouldn’t get in the ocean without them.  It was beautiful. 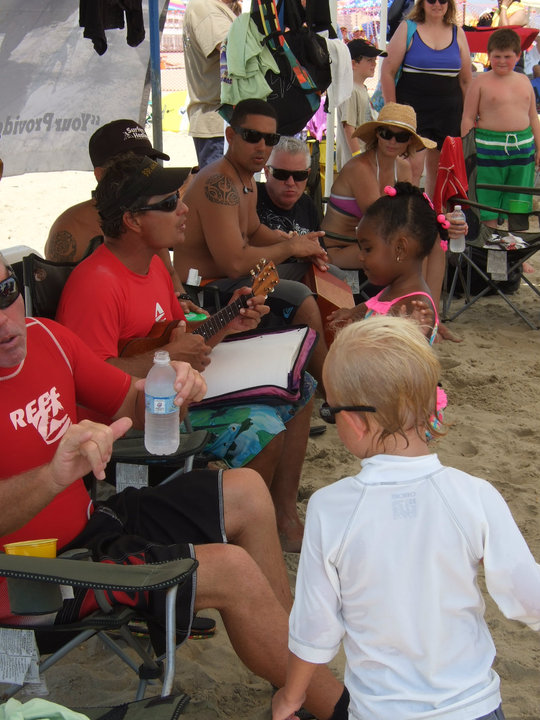 When Rob’s surf time came, he surfed with Pito and had the time of his life.  At one point, Pito had Rob out on the ocean standing up on the board with his arms out helping him find his balance on the 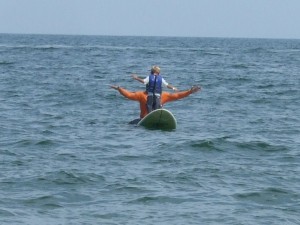 board. Moments later he was putting his arm around Rob to steady him as a wave came through.  More than once Rob was standing on the board, riding a wave in with Pito behind him holding him up.  How do you thank this professional surfer that you just met who gave your child an experience they (or you) will never forget? What words do you use? It was inspiring and humbling to witness the kindness that everyone involved in the day showed to our children.  A simple thank you seems so inadequate in exchange for the experience we were all given. 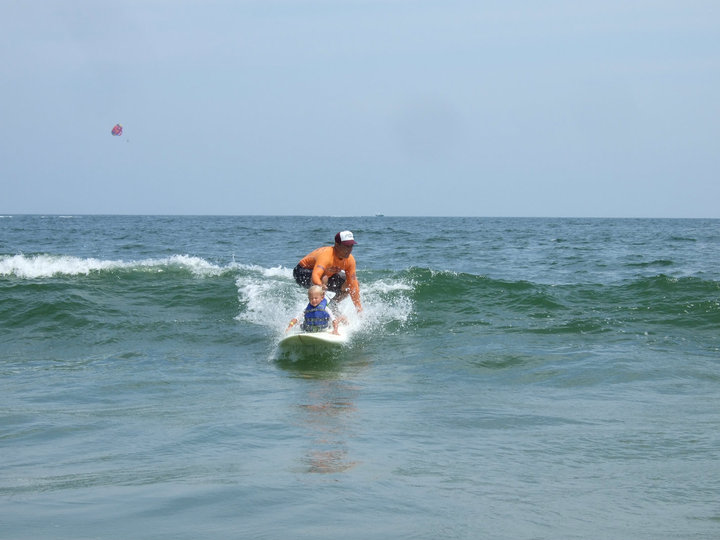 The next year at OCMD was no different.  Again, we had a later surf time, but showed up bright and early for the kick off and to spend the 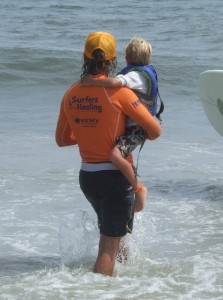 day enjoying the surfing.  We also got there early to be inspired by the kindness of the people who do this for no other reason than they care and want to give these surfers with autism the joy of being up on a surfboard.  In Ocean City, Rob surfed with Kai and again had an incredible experience.  On one of the rides in, the board tipped over and Kai immediately scooped Rob up and held him, making sure that he was OK.  We have some fantastic pictures from the day that bring a smile to my face each time I look at them. 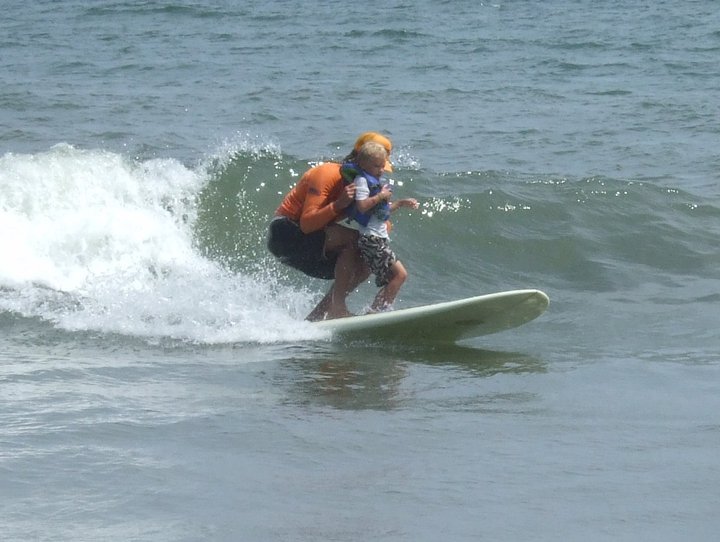 My friends, there is an organization out there that will help your child in more ways than you or they could ever know.  Surfers Healing has helped my son go from being terrified of the ocean to being able to dive into the waves last week, care free and unafraid.  Two years ago we couldn’t drag him into the sea, and this year at the beach we couldn’t drag him out.  I truly believe that the days on the beach with SH had a great deal to do with this change. 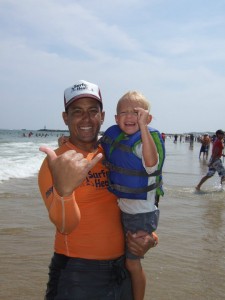 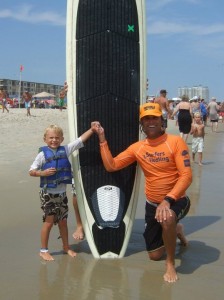 So this is my small way of saying Thank You, Surfers Healing! Thank you Izzy Paskowitz, Pito Rodriguez, Kai Dilling and ALL of the surfers and volunteers that come out for these extraordinary days on the beach.  Your organization gives our children with autism not only the experience of surfing, but also the pride of doing something fun that is downright cool.  Your efforts and your dedication give the families that you serve inspiration, hope and pure joy.  We hope to be joining you on the beach again soon.

Fellow Thinkers, we would LOVE to hear about your favorite memories from Surfers Healing if you have had the privilege of attending one of the camps. Make a comment or post your pics on our Facebook page! And if you haven’t been and you live anywhere near one of the SH camps, do sign up. You won’t regret it.

OWN did a great documentary about the Paskowitz family and Surfers Healing called The Swell Life.  Be sure to check it out. 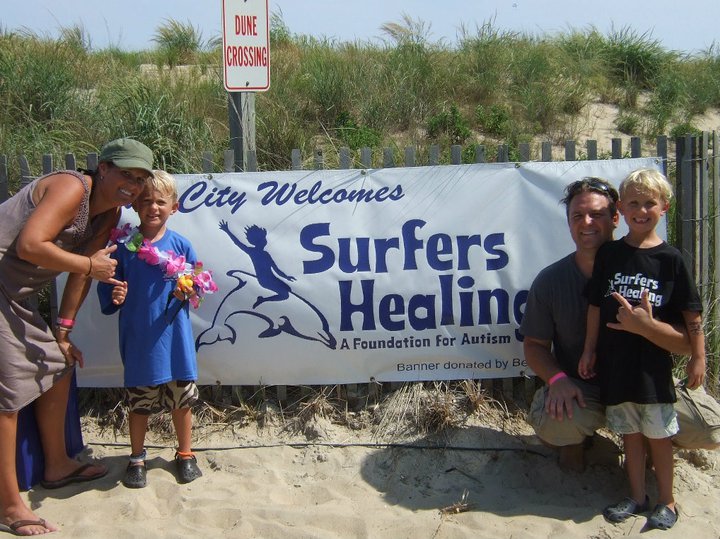 14 Responses to Thank You, Surfers Healing!