I haven’t posted anything here for a long time for a number of reasons, just one of them being the hatefulness that fear of COVID as well as fear of COVID vaccines has brought out all over the world. But my friend Dawn Clifton posted this on Wednesday, and it makes an important point achingly clear. I thought it should reach as many people as possible.

Just a day in the life of a special-needs parent. I literally dread these texts from our pharmacy, and I usually get them at least once a month.

She’s been on the same meds for six years. SIX YEARS! Yet the insurance companies (both primary and secondary) don’t want to pay for her meds.

Just to put this into perspective, these meds are benzodiazepines, meaning that if we miss a dose we go to the hospital due to seizures.

I’ve spent three hours on the phone so far today: pharmacy, neurologist’s office, and then our primary insurance company.

My pharmacist apologizes up and down saying, “I hate insurance companies. They are screwing all our patients.”

On the phone with our insurance company I said, “It’s up to you: Approve the meds, or pay for her hospital stay.”

The final answer after spending three hours on the phone was, “We will let you know if it was approved by the end of the day.” 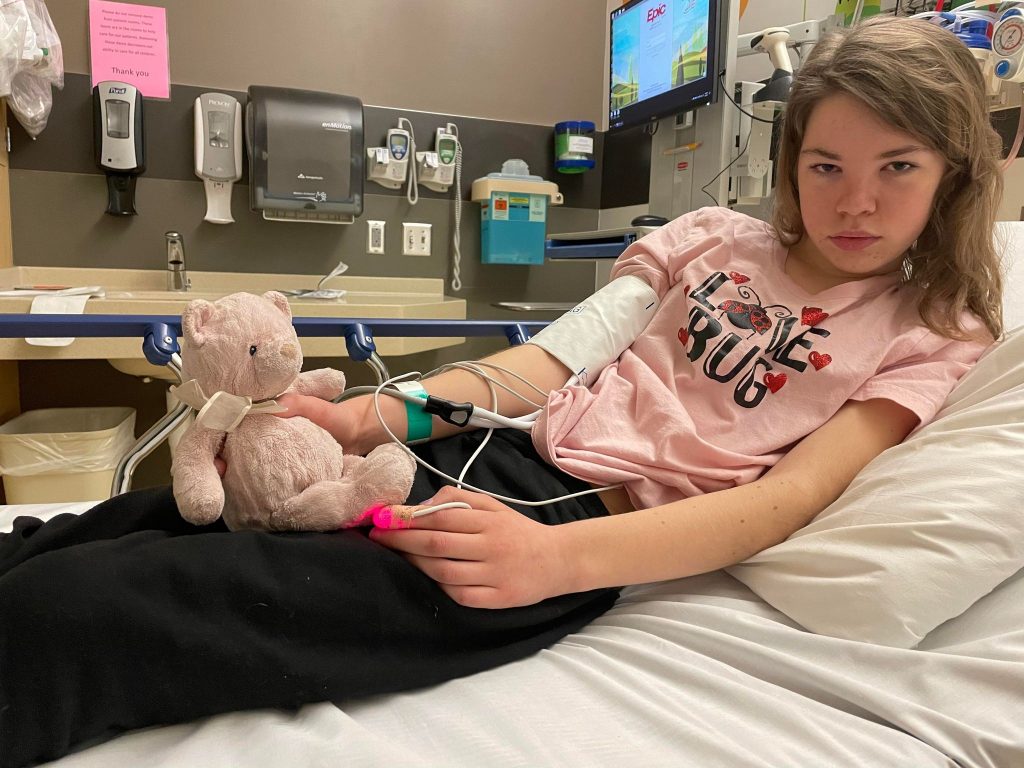 Kennedy during one of her many hospital stays

Everything is a fight for Kennedy. Everything.

The other day a friend posted asking for compassion for both sides of the vaccine debate. I went through the comments, as I often do, and a man commented that anyone denying the vaccine should not be allowed medical care. There were three other moms on that thread with vaccine-injured children like Kennedy.

I don’t have the fight in me to jump into asinine arguments such as that. I’m busy fighting with everything I have to keep my vaccine-injured child alive, as I have been doing for 13 years. Do you think I woke up this morning wanting to spend hours on the phone trying to get meds by Friday because my insurance company doesn’t want to approve it? And that’s just a very small part of what I do on a daily basis to protect my child.

If you believe I or my family should be denied medical care because we won’t be getting anymore vaccines in any of our lifetimes, you can go fuck yourself. (Don’t ask me to have compassion for people who chalk up my journey to a political agenda.)

I followed the well-child visits and did everything I was “supposed” to do, and I ended up with a lifetime of hell. Not one, but two vaccines injured my child. I’ve been to the depths of hell praying to God that he would take my child from this earth so she wouldn’t suffer here anymore.

I’ve been fighting to save another human’s life before it was cool and political rhetoric. And the things I’ve done for my girls are the antithesis of “selfishness.”

Furthermore, if I have to hear one more time that I worship Trump because I won’t vaccinate Kennedy or the rest of my family . . . I’ve said it a million times: Both sides suck. I don’t not vaccinate because of a political agenda.

I don’t vaccinate because I watched my perfect daughter have 45-minute seizures after two different vaccines at two different times.

I would apologize for my mouth in this post, but, truly, I’m not sorry.

Before you contemplate vaccinating, you should understand the ramifications. The pharmaceutical companies have absolutely no liability, and no one will be there to beg and plead to your insurance company, or your doctor, or anyone else. You are the only one responsible.

After five hours of phone calls, our insurance company denied Kennedy’s meds. I have 24 hours (that’s all we have left of her meds) to get this overturned. She’s been on these meds for six years! And the med in question is $1200/month. Because Dravet syndrome isn’t hard enough.

Matt is on one phone with the insurance company while I’m on mine trying to contact the pharmacy and neurologist. The insurance company is finger pointing, saying it’s the pharmacy. We know it’s not the pharmacy. The amount of insanity is mind boggling. We’ve gone from “It’s going to take three days,” when we’ve been working on this much longer than that, to “please hold.” We are not getting off these phones until it’s resolved.

Please let me know what family has time for this?

Did I mention we are moving tomorrow? My head is about to explode.

Edited to add the doctor’s office says every bit of information they can provide has been sent. It’s currently in the appeals process with the insurance company.

After another hour on the phone, the insurance company will let us know within an hour if the appeal is overturned. We live in an age where an insurance company can override a neurologist. Until we all stand up together these gigantic companies will continue to try to control our lives. If anyone wants to make a call on Kennedy’s behalf, I am more than willing to post the phone number. 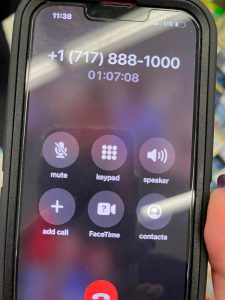 After three more phone calls of this length today, it was approved and I have her meds in hand!

The denial was not because it was a generic med,  as we were told yesterday, but, worse, because it was deemed “not medically necessary.” If I weren’t so elated for all of your support and having these meds in my hands right now, I would write a whole f bomb diatribe on “the system.”

The lady who helped Matt and me, her name means Helper of God. She stayed on the phone with me for over two hours while I drove to Walgreens and stood in line. She made sure everything was approved.

She told me she had asthma until she was five. That her parents went through hell with her. Ambulance rides, many hospital stays. And that her mom believes prayer healed her. Doctors couldn’t explain it and still to this day list her asthma as in remission.

God shows me over and over I’m never alone. And continually shows up through all of you. This woman told me today, as if God was speaking directly to me, “Your daughter only has you to advocate for her. I know these fights are hard. Please don’t ever give up. She needs you.”

Last night went I went to bed feeling utterly defeated and exhausted, only to open FB and see so many of you willing to help us.

Matt may not be a biological father to a special-needs child, but he fills the shoes of one as if he is. He fought every step of this with me. I was telling the woman on the phone today all about him, as she had spoken to him first, and explained his name means Gift from God and that’s when she told me her name means Helper of God.

These situations are many when it comes to fighting for Kennedy but all of you lift us up when we need it most.

Marc, I didn’t even ask for funds to cover the over 1K cost of the meds if we had to pay cash to get them by tomorrow, but there you were ready to help with so many others! And Stefanie jumping in and leading the charge! I’m beyond speechless for the community our family has. The list is too long to tag everyone who texted, messaged and called but please know this post is for you.

I’m sitting in the car right now utterly and completely praising God for every human in our lives. Yes, our life brings great challenges, ones I could never have dreamed of, but the people who surround us remind us to keep going.

This entry was posted in Blogs by Thinking Moms' Revolution and tagged Dravet, medications, seizures, vaccines. Bookmark the permalink.