Today is the birthday of Jupiter Hammon, the first African-American to publish poetry, so it’s the day that was chosen to celebrate Black Poetry and honor the contributions of all African-American poets to the world of poetry.  I thought I would share with you what is still one of my very favorite poems.

A long, long time ago, when I was in second grade – the age my son is now – I came across a poem that touched me to my core:

Hold fast to dreams,
For if dreams die
Life is a broken-winged bird
That cannot fly.

Hold fast to dreams,
For when dreams go
Life is a barren field
Frozen with snow.

It was written by Langston Hughes, who I learned was African-American and died in 1967, shortly before I first encountered his poetry. At first, Hughes’s racial background didn’t signify much to me. But Martin Luther King, Jr. was killed a few months previously, and I was learning about him and his efforts to obtain civil rights for a population that was still reeling from the aftereffects of slavery. I didn’t know at that point that Hughes’s poems about dreams had influenced MLK’s thinking  – encapsulated in the legendary “I Have a Dream” speech – but it seemed likely to the little white girl I was that Hughes had had ample opportunity to witness the redemptive and inspirational power of dreams – and the devastation of their loss.

I didn’t know much about Langston Hughes, but it was clear he understood important things. I was only seven years old; what did I know of life? And yet, I recognized the essential truth behind Dreams. Without dreams – hopes, aspirations, big ideas – life has no way of getting off the ground and soaring. Perhaps these particular words spoke to me so strongly because I flew, literally, in my dreams, so dreaming and flying are inextricably intertwined for me. Flying is a central metaphor in my life. I told my ex-husband all about it once, and he surprised me with a print of a drawing by Brian Andreas that said, “For a long time she flew only when she thought no one was watching.” Few things in life have touched me more deeply than the implication that he wanted to be there to watch me soar. I was grounded a number of times by cataclysmic life events, but I still have that drawing over my bed waiting for when I am ready to take flight again. 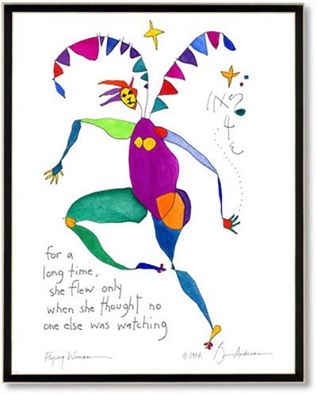 Another piece of literature that hit me hard long ago was Eugene O’Neill’s landmark play, The Iceman Cometh. It’s a long play, but I read it as a teenager in one marathon session interrupted only for dinner. The central theme of the play is that people need dreams, even those that are never going to come true – known as “pipe dreams” in the play – in order to survive. Hickey, the main character, is eagerly awaited by his buddies at Harry Hope’s bar, but when he finally shows up,  he’s not the happy-go-lucky, life-of-the-party person they expect. In fact, he spends a lot of time convincing the others they would be better off without their pipe dreams. They resist, trying to prove that their dreams are not pipe dreams, but one by one they return to the bar, shattered shells of their former selves, as they are forced to face the reality that their dreams are not going to come true. They only perk up again when Hickey is dragged away by the police, making it clear that he was living in his own state of denial and had not discovered some amazing universal truth after all.

I was lucky enough to get to play Cora, a two-bit whore who dreams of marrying her bartender boyfriend and going to live on a farm, in a production of Iceman back in 1994. As a result, I got to explore the play and its themes in depth. I still think it’s a marvelous play, and I agree that even unattainable dreams are better than no dreams; however, it always bothered me that O’Neill left the group of barflies essentially unchanged by the experience of having their dreams shattered. In addition, the play contained the implication that people need to lie to themselves in order to function.

I don’t believe that at all. Frankly, I think O’Neill understood one important facet of dreams, that you have to believe in their possibility in order to hold onto them, but missed the core truth about dreams: Dreams are creative. They are the blueprints for the future, and they function best when they spur action and change. If they are not doing that, it’s time to assess why. Have you have made your happiness dependent upon making the dreams come true? That’s a lot of pressure for something as ephemeral as a dream to withstand. Or is that they are the wrong dreams? Like some of the denizens of Harry Hope’s bar, do you really not want the things you are dreaming about to happen? Or is it that your goal is so grand that you can’t figure out a next step to take to get you a little bit closer?

I’ve always loved Joni Mitchell’s song “Circle Game.” If you don’t know it, it’s about growing up. Each stanza covers a child at a specific age. When the child is 10, “promises of someday make his dreams.” When he’s sixteen he fulfills his dream of becoming a driver.  At 20, “though his dreams have lost some grandeur coming true, there’ll be new dreams – maybe better dreams – and plenty before the last revolving year is through.”

In order to become a driver, the boy in the song had to take a test and get his learner’s permit. Then he had to learn to drive. He may even have had to buy a second-hand car and fix it up.  His dream of driving himself around town was fulfilled. Then, after a while, that dream lost its luster and he went on to come up with new dreams for his future. Why was that dream fulfilled, when so many others aren’t? Well, for one thing, the boy had enough faith in himself to know that his dream was attainable. In addition, he could see the steps he needed to take to attain that dream, and he took those steps, one by one.

That, to me, is how dreams function optimally in a person’s life. They fill you up with the wonder of possibility. Nobody’s going to achieve everything they ever dreamed of – I haven’t given any Oscar acceptance speeches lately – but that doesn’t mean that even the ones that aren’t fulfilled don’t serve an important function. Those Oscar acceptance speech dreams spurred me to audition, to go to acting school, and to work very hard on my craft. As a result, I had a number of extraordinary experiences I wouldn’t trade for anything. 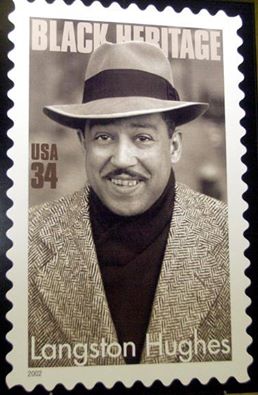 I used to sing a song called “Simple Little Things” from 110 in the Shade.  “Not all dreams are great big dreams,” sings Lizzie. “Some people’s dreams are small. . . .  My dreams, like my name, are very plain.” People used to tell me I did a great job with that song. That always surprised me, because in my eyes I have huge dreams. But I guess I did relate to Lizzie’s simple dreams too: a happy family – especially after my older son died as a newborn.

I only had him for two days, but I missed him something fierce, and there was a huge hole in my heart for a little boy. I wanted to fill that hole with another child, but for a long time that seemed like the most unattainable dream there was. A friend of mine said to me, “You know you’re going to have another, don’t you?” But I didn’t know that. I was 41 when Zane was born, and depressed, grieving people are not the most fertile people in the first place.

Then one day, I fell asleep on my acupuncturist’s table. When she came back into the room and turned on the light, I realized I had been dreaming. In the dream, I was holding a baby, approximately 10 months old, definitely a boy and definitely mine. Wow! The feeling of sweetness was overwhelming. The dream was so real that, for the first time, I really believed that another little boy could be coming. I could feel him. One night. I had another dream: My son Zane came to visit as an older child, and he brought another little boy along that he introduced to me as his “little brother.”

Those two dreams helped me to believe in the possibility of another little boy in my future and kept me going and doing the next step when all the odds appeared against me. I won’t bore you with the details behind those odds, but I gave birth to my second beautiful baby boy at the age of 45. One day when he was about eight months old, I was holding him, glorying in his sweet little babyness, and it occurred to me that I was experiencing exactly the feeling I had dreamt about.

I have come to understand one more thing about dreams. Even when it seems like they die, they don’t. They may lie dormant in that frozen field, or they may morph into something else entirely, but it is a basic fact of the human spirit that the capacity to dream is always there, even if it hasn’t been used in a long time. Life is a broken-winged bird, but wings can heal. Life is a barren field frozen with snow, but snow can melt. And people can learn to dream again.

It’s probably good to start small so it’s not too hard to believe in your dream. Focus on things that you want to happen that you believe can happen. Envision them as best you can, feel them in your heart. If there are steps you can take to make them real, keep taking the next step – even if it’s just telling a friend that this is something you really, really want to happen. And someday, hopefully soon, you may just feel like that wing is all better and you can fly again. 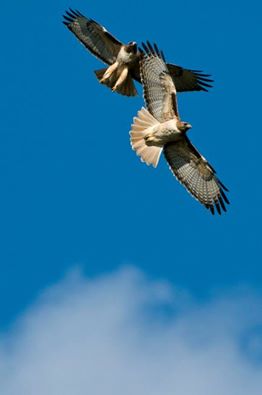 Last week I was told by a psychic that my spirit animal for right now (because it can change) is a hawk. That feels right. What are the two main characteristics of hawks? They fly high in the sky – beautifully, gracefully, effortlessly – and they see extremely well. They fly to some high vantage point, look down and see the Big Picture. My 91-year-old mother died while I was writing this blog, and my friend Amy told me that she saw two hawks flying together in the sky. It made her think of me and my mother. I like that idea: my mother and I soaring high above all the details that in the moment seem so big and insurmountable, getting to see the Big Picture together.

I think it’s time for me to take up some dreams that have lain in that barren field under snow for a while, don’t you?

What are your dreams, for yourself or your children?  Are they alive with possibility or frozen under the snow? And what steps are you taking to achieve them? And, lastly, since I see helping others to find their best selves as one of the core functions of TMR, what are you doing to help those around you to fly?

9 Responses to Hold Fast to Dreams