Everything can change in a moment.

The moment I learned there was hope, I was reaching for toothpaste.

Beside me, my phone was cueing up a video from a friend-of-a-friend whose son had
autism.

Images of a beautiful boy, life robbed by autism, scrolled on the screen. Coldplay’s
“Fix You” played in the background. I was mesmerized. The tooth brushing would
have to wait.

I watched the video a half dozen times that night. Somewhere between the chilling
photograph of the boy staring blankly into the distance and the heartwarming image
of him hugging his sister, I fell in love. Moved each time through the entire gamut of
emotions. Sad tears. Hopeful tears. Positively elated tears!

And in that moment, I found hope.

Before I watched their video, I read articles. I searched online. I heard of recovery
stories, but was skeptical. The people telling me biomedical interventions worked
were often also trying to sell me something.

But not this mom. All she was selling was the truth. A truth she pilfered hours from
her hectic days to share with the world. Her selfless devotion spoke volumes.

So there I was, back to the tooth brushing, but armed with new found hope. Vowing
to God that if my daughter began to speak, I would tell her story with a video.

The next day, I set to work. Healing my daughter with food, supplements and other
biomedical interventions became my life. When her recovery far surpassed learning to
speak, her story became worth sharing.

For last year’s Autism Awareness month, I stole away hours to make her video.

Parents from around the world wrote to let me know they found hope between our
images. It became their epiphany. Their moment.

I learned how critical it is to share our stories. To help everyone who’s stuck in
the wondering phase to begin to move forward.

So share your story. Or share ours. Because every child deserves recovery — and a
prerequisite for recovery is hope. 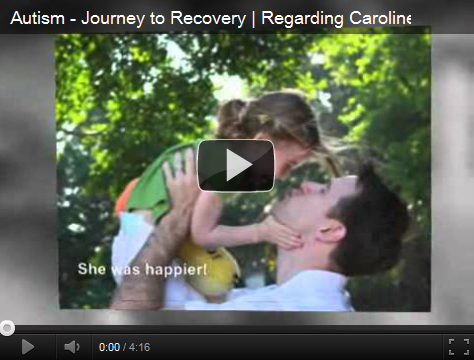 6 Responses to Autism Recovery | Hope: Found in a moment