In the Name of “Protection”

I encountered the meme you see here on a Facebook group that I belong to. This post is my response. 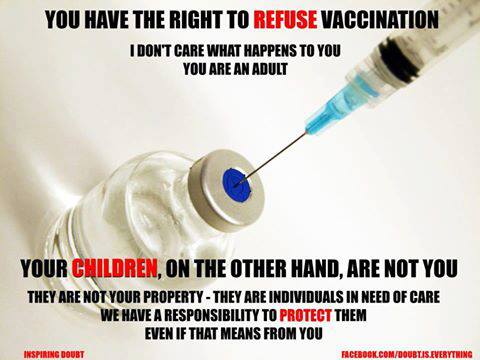 I’m going to assume intellectual honesty here and commend the poster for actually caring about children’s health. If that’s true, and this person posted this because he cares — not because he’s making pots of money on his investments in pharmaceutical companies, or he’s getting paid to tout their safety in public forums, or he’s a physician who simply cannot accept the truth of the harm that he’s done in the name of the “greater good” — then that’s a huge positive. That means that this person might have an open enough mind to actually listen when confronted with evidence that children are being harmed on a massive scale by the practice of vaccination.

The meme essentially says that children should be forcibly vaccinated — whether or not it is okay with their parents — in order to “protect” them.

What’s wrong with this?

Well first off, it is a fact that some people are harmed by vaccines. If not, vaccines would not be classified by the U.S. government as “unavoidably unsafe,” and there would be no Vaccine Adverse Events Reporting System (VAERS), or Vaccine Court that has awarded over $2.5 billion dollars to date to victims of vaccine damage, including at least 83 children with autism, and no withdrawal of a vaccine from the marketplace. A quick perusal of the VAERS system will show that every vaccine comes with at least a small risk of injury, potentially catastrophic injury or even death.

It would be one thing perhaps if we were talking about a treatment for a condition that is sure to kill a child, or even likely to, like a malignant brain tumor for instance. One might be willing to take on the risk of injury or death, or even force someone else do so, to avoid likely death. But that’s not what we’re talking about, is it? Vaccines are about prevention and prevention of something that is usually of short duration with few complications.

So, in the name of preventing one condition, you (I’m talking to the meme poster here) insist that a parent and child take on the risks of other, possibly much more devastating, conditions. Why do you get to decide what’s an acceptable risk for someone else’s child?

Nearly 50% of children today are living with chronic illness. The number of long-term illnesses that ravage whole families — physically, emotionally, and economically — has risen rapidly as the vaccine schedule has exploded.

Children born in the 1960s received far fewer vaccines than children do today. Most children today receive many more vaccines in their first year, when their bodies are not yet capable of producing antibodies, than my generation expected to receive in our whole lifetimes (the flu shot has complicated that expectation). Common sense would indicate that if those two facts coincide in time — the rise in chronic illness, including autism, and the rise in vaccination rates — there is a likely correlation.

What’s more, there’s good reason to consider that the risk is cumulative, meaning that the more vaccines given, the more likely it is that damage will be sustained.

Unfortunately, the answer to that is a resounding, “Hell, no!” The CDC is still adding to the already overloaded vaccine schedule. The schedule my daughter, born in 1999, faced was ridiculous already but far lighter than it is today. Not one study exists on the safety of the vaccine schedule as a whole. Not one.

I was arguing with a woman last night who is certain that antibiotics and formula feeding play heavily into the autism epidemic but vaccines don’t. I fully support the idea that antibiotics play a crucial role in the development of many cases of autism, but antibiotics have been heavily over-prescribed for my entire lifetime. They cannot be solely responsible for the huge recent upsurge in cases of chronic illness in children. Similarly, breastfeeding rates were actually much lower back in the ’50s and ’60s (inspiring the creation of the La Leche League in 1956) — when the autism rate was still 1 in 10,000 — than they are today. (“A 1994 Canadian government health survey found that 73% of Canadian mothers initiated breastfeeding, up from 38% in 1963.” “A 2003 La Leche League International study found that 72% of Canadian mothers initiate breastfeeding and that 31% continue to do so past four to five months.”)

My mother, born in 1922, was told she had “the wrong kind of nipples” to breastfeed, hence I and my seven siblings were formula-fed. My sister, whose children were born in 1967 and 1970, was actively discouraged from breastfeeding and gave up when she got mastitis. My 14-year-old daughter, on the other hand, was nursed for three years, and my 6-year-old son for four. I think my family is indicative of overall societal trends. Antibiotic use and formula feeding cannot account for what we are seeing.

So (back to the meme poster) you’re willing to force children to take on the risks of vaccination in order to “protect” them. Where do you draw the line? Or do you draw a line at all? All children should be vaccinated with anything that is okayed by the CDC and put on the vaccine schedule? After all, they’re the “medical professionals,” right?

What about illnesses that are almost always benign in children, like chicken pox and mumps? Do children need “protecting” from those?

I got a mumps shot when I was 10 or 11 years old. I got the mumps right after that, and since no one had informed my mother that it was a live-virus vaccine and could shed, I went swimming and gave it to another child as well. Soon after that I developed the allergies and asthma that have made my life miserable on numerous occasions. Those conditions made me a freak in the early ’70s, even within my own family. I’m the seventh of eight; none of my older siblings had allergies or asthma, just my younger brother and I — the ones who, coincidentally, got that live-virus mumps shot.

Allergies and asthma aren’t freakish now, when most kids have live-virus vaccines at the age of 12-15 months.

Here’s a hypothetical . . . What if the CDC were to approve a vaccine for an uncommon blood-borne illness, similar to AIDS and only transmitted by sex and dirty needles, for newborn babies – say, three doses in the first year of life? And what if whatever immunity the vaccine confers wears off by the time the child is fifteen years old? (In other words, it is highly unlikely that the average child will derive any benefit whatsoever from the vaccine.) And what if that vaccine were associated with a three-fold incidence of autism in boys? Would you force a newborn to have that vaccine?

Now I know what you’re thinking: Oh, come on! That’s a ridiculous hypothetical! The folks at the CDC are caring “medical professionals.” They would never approve that! They have only the well-being of the general public in mind.

You know, I agree with you. It’s a ridiculous example. Only an extremely cynical group of money-grubbing folks who didn’t give a damn about the health of the public they are charged to “protect” would do such a thing. Only . . . they did.

The hepatitis B vaccine is routinely administered on the first day of life in hospitals all over the United States. Hepatitis B is a blood-borne illness, transmitted in the same ways that AIDS is. There is virtually no chance that a newborn will encounter hepatitis B unless the child’s mother is infected (easy enough to discover through a blood test).

As a matter of fact, it is extremely unlikely that a child born to an unexposed mother will encounter hepatitis B until he or she is having sex or sharing needles, traditionally unlikely till the teen years, wouldn’t you say? And yet, any immunity that the vaccine might confer is only good for about 15 years, and one study said 30-50% of subjects had no antibodies within seven years.

In addition, the hepatitis B vaccine was associated with a three-fold risk of autism in a study conducted at Stonybrook University. It’s also a significant factor in the Verstraeten Thimerosal study’s generation zero numbers. High levels of mercury content in vaccines (almost always including the hepatitis B) in the first month of life were associated with an 8-11 times higher risk of autism.

So remind me again what this vaccination was for? Oh, yes! To “protect” my child. From something he was never going to encounter anyway.

Does that mean that I think I know more than “medical professionals” do? Damn straight it does. Because I have made it my business to know. (This is not to say that there are not plenty of “medical professionals” who do make it their business to know as much as possible, but they tend to disagree with the CDC’s vaccine policies too.) Why? Because I have a hell of a lot more to lose than they do.

If a “medical professional” damages my child with a vaccine, that person bears absolutely no liability whatsoever for their decision, even if that vaccination is clearly contraindicated based on criteria contained in the vaccine insert.

I, on the other hand, may have to live the rest of my life knowing that I allowed someone else to do something that harmed my child, all in the name of “protection.”

When I say that forcible vaccination of my children will happen only over my dead body, I mean that literally.

49 Responses to In the Name of “Protection”