I remember looking up from my office desk on the 50th floor of our building in Midtown and seeing smoke pouring out of a gaping hole in one of the Trade Center buildings.  We thought a small plane had accidentally hit the building.  Calls began coming in from our headquarters in Delaware.  People heard something had happened, but it was more of a gossip kind of interest at that point.  Not real yet.  I remember saying that I thought it was a big deal.  That there was a lot of smoke.  It was a big hole.  People had to have died. 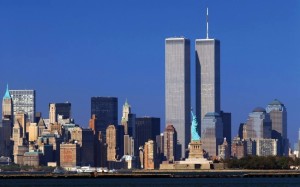 I called my husband who worked at One Wall and told him to call his mom and tell her he was okay, and he shrugged me off because he was two blocks away.

My office mates and I watched the second plane hit.  And all at once, collectively, we knew it was no accident.  I didn’t reach my husband again until many, many hours later.

We were lucky.  My husband’s building was damaged and closed for a few weeks, but he made it home covered in ash after the towers fell.  Many people were not so lucky.  The temporary walls that were erected at Grand Central with flyers from families looking for their loved ones were devastating, but I forced myself to look at them every day.  For months afterwards we attended funerals for fallen firefighters to make sure their families knew how noble, how selfless, their sacrifice was, and that they were remembered, valued, and deeply, deeply appreciated.

When I finally ventured downtown, it smelled like death.  I stayed north of 14th St. for a year.

I can’t compare Harry’s autism to September 11th on a grand scale.   One affected the world, and one impacted our family.  But there are a lot of children who show signs that things are going wrong.  Reflux, food allergies, asthma, constipation, diarrhea.  I think of these as the smoke pouring out of the hole in the first tower.  And then it hits.  The Big A.  And you know, your family collectively, that something tragic has happened.    And life as you knew it — blissfully unaware — is over.

I think of all the signs our government missed:  The miscommunications between the agencies.  The less-than-optimal security at our airports.  And I think, if only I had asked to see an insert in the doctor’s office.  If only I had insisted that milk was the culprit behind the severe reflux that plagued my child instead of blindly accepting the Prevacid prescription that gave him clostridia but didn’t help the reflux one bit.  And then I think:  The only thing to do is to move forward and heal.

Jon Stewart did a charity fundraiser that October at Gotham Comedy Club.  For the first time, we laughed.  The Yankees were in the playoffs and Bush walked out on that field solo and threw the first pitch.  It was an amazing experience to be in the stands.  A while after that, Springsteen played at Shea and we were lucky enough, as lifelong Springsteen fans, to attend.  The Rising.  I think he healed half the city with that album. The city did not forget, but it moved forward.

We have been fortunate enough to watch our son heal from his injuries.  He is not recovered yet, but we have made significant strides and I feel confident recovery is in our future.  We love and accept and value every amazing little bit of him and tell him every day how loved, how wanted, how irreplaceable he is.  And we all move forward.

We heal, but we do not forget.  We remember.  We tell his story because it happened, and it didn’t have to.  Our government has dropped the ball:  this time by turning a blind eye to our children and dismissing their mothers and fathers and their collective experience.  I have heard some of our Congressmen and women begin to question.  It is not enough, but I am hopeful that it is a start.  I am hopeful as other countries begin to think for themselves about their vaccination programs and about the insecticide that we pass off as food.   I feel hopeful when I read that certain private schools in LA have less than a 20% immunization rate because parents are waking up to what is happening around them and questioning it.  Thinking for themselves.

I have said, for the last twelve years, that I hate this day.  And I do.  Each year it gets a little easier, but that feeling of loss never goes away.  I hate to talk about it.  It is still too easy to recall exactly what I was wearing and remember exactly what my co-workers were saying.  The burning towers are etched in my mind.  It’s as if I am still in that moment, wondering if my husband will come home, if my friends are okay, if life will ever be the same.

For all of you that were impacted, especially directly, by the events that occurred that day, my heart goes out to you.  If you were one of the people that sent prayers, food, water, clothing or money to the families of the fallen, I thank you and honor you in my own small way.

Remember.  But move forward and heal.

This entry was posted in Blogs by Thinking Moms' Revolution, Goddess TMR and tagged 9/11, autism, September 11. Bookmark the permalink.

9 Responses to My September 11th