No One Knows. Or Do They?

Yesterday I read yet another article on how parents who put off having children are to blame for the neurological problems that children are facing in ever-increasing numbers, How Older Parenthood Will Upend American Society. Granted, the author never said it flat out, but it was the strong subtext. So what was the response in the autism community to this “insightful” article? I think disgust might be a reasonably accurate description. Mama Mac’s comment was “Bullshit! Older parents don’t make autism. Autism makes parents old!” And, while I have suspected that a larger percentage of the children of older parents and parents who have used assisted reproductive techniques (who are by no means all “older”) have neurological problems than parents who are in their twenties and have not used ART, I’m inclined to agree with Mama Mac. Because, when it comes down to it, this theory touted in all the usual mainstream media outlets in slightly differing forms, cannot explain what we see every day.

Initially it was thought that it was older mothers that were to blame, then it was decided that older fathers were actually the source of the genetic mutations that are associated with autism. Source after source after source says that 15-30% of all cases of autism can be explained with this theory. No one says how they got that number, though. A man over 40 only has a two percent risk of having those genetic mutations in the first place. There is some likelihood that sperm sporting these mutations would find it more difficult to fertilize an egg than sperm that didn’t, so it seems unlikely that even two percent of children born to fathers over 40 will have these genetic mutations, and fathers over 40 account for only a small percentage of babies that are born. The official autism rate for current twelve-year-olds is one in 88. There is much speculation that for younger children the rate is higher still, like oh . . . say, close to two percent. So perhaps these mutations can account for the not-quite-two percent of children of fathers over 40 who have autism, but what accounts for the not-quite-two percent of children of fathers under 40?

Even CBS News expressed some doubt that this theory does much explaining:

But Yale researcher Dr. Stephan Sanders warned it’s too soon to definitively say the father’s age is the top factor.

“So I think it is fair to say increasing father’s age does increase the instance of autism but that effect is small,” Sanders said.

This theory and study is just one in a long line of theories that make parents of children with autism roll their eyes. Others theories that purport to account for the recent rise in cases of autism include such gems as bad genes , geeks marrying, living near a highway,  prenatal flu infection , the mother’s use of antidepressants , and the mother’s weight . I’m sure I’ve missed a couple. You know why the parents of children with autism roll their eyes every time one of these studies comes out? Because even if valid every single one of these theories can only account for a small percentage of cases. I know plenty of families with autistic children whose parents were young, slim, healthy people living nowhere near highways, and no hint of geek or even depression – at least until after the autism diagnosis.

The same group of parents roll their eyes for a different reason every time a new study comes out on medical issues for people with autism, including things like gastrointestinal difficulties, mitochondrial dysfunction, seizure disorders, and autoimmune problems, especially life-threatening food allergies. The autism parent response to these articles is usually along the lines of, “Well, duh.  I could have told them that five years ago,” or, “It’s about friggin’ time we saw this in a mainstream publication.” That’s because this group of parents are among the most medically informed people on the planet, and they know the physical issues their kids are facing day after day. The researchers performing these medical studies are listening to us and are starting to nail down the science to back up what we already know. The rest of the world then says, “Gee, I guess you were right all along,” or forwards the article to us, completely forgetting that we told them about it ages ago.

My point is this, these knowledgeable parents are driving the medical research on treatments that actually help people with autism. The vast anecdotal knowledge we have accumulated is being gathered and used for good. Except for one area: the causes and prevention of autism. Virtually every article you will read on autism contains the words “No one knows” somewhere in the article. “No one knows” why autism is so much more prevalent than it used to be. “No one knows” what causes autism. “No one knows” what makes one child more likely to develop autism than another.

But that’s not strictly true, is it? Some people do know. The very same parents we’ve been talking about know a heck of a lot more about the subject than the author of just about any article written for a mainstream publication. How do they know? They’ve been sharing their anecdotes with each other for years. When you hear the same story over and over again, you start to get a pretty good picture of what’s going on. In the science world, that’s known as “gathering data.” (One of my pet peeves is when information is dismissed as anecdote, as if that makes it any less valid data than data that has been quantified.  There is nothing “scientific” about that attitude.)

For instance, one thing that most people with children on the spectrum seem to have in common is some form of immune dysfunction, especially autoimmune conditions. Things like lupus, rheumatoid arthritis, asthma and allergies appear in much higher percentages in autism parents than in the general population.  And yet you rarely see that trumpeted in a mainstream publication.

Why does this get so little attention?  I think it’s because autoimmunity is closely connected to the other thing that many people know about autism. Autism can be, and is, frequently triggered by vaccines. Autoimmune conditions are known to be triggered by vaccines, and by vaccine adjuvants. Talking about autoimmunity will immediately bring up the subject of vaccines. But autoimmune conditions are rising at ridiculous rates these days as well.

I developed allergies, then asthma between the ages of 11 and 13. At that point, medical professionals knew very little about asthma as it was generally considered pretty rare. Often they would talk about children “growing out of it.” Why, then, did I grow into it? Could it be that “new” mumps shot I’d received at 11? Maybe the reason why so many children in the past who had asthma seemed to “grow out of it” was because they stopped vaccinating long before we do now.

So we know a large chunk of the vulnerable population: children of people with autoimmune conditions. And, yes, there are people with autoimmune conditions whose children are neurotypical, or at least not autistic. So what’s different between those children who are neurotypical, or close, and those who are severely affected by autism? Once again, all you have to do is go to the deep knowledge base that is parents and you’ll get your answer.

He was fine until he was at the doctor for his 12-month visit. He had a cold and was on antibiotics for an ear infection, but the doctor insisted it was safe to vaccinate. He got five vaccines that day (some of them multiples), spiked a fever that night and arched his back (sign of seizure). I gave him Tylenol, but it didn’t seem to help. He’s never been the same since.

That’s a synthesis, not a particular case, but it illustrates several of the most obvious risk factors that we know will be more likely to lead to an autism diagnosis down the road:  antibiotic use, vaccinating while sick or on antibiotics, multiple vaccinations in one day, and the use of Tylenol (acetaminophen) to bring down the fever. (Natasha Campbell-McBride M.D., author of Gut and Psychology Syndrome, goes so far as to say that children of parents with autoimmune illnesses are never candidates for vaccination, while Kenneth Bock, M.D., author of Autism, ADHD, Asthma and Allergies, Healing the New Childhood Epidemics, gives guidelines for safer vaccination.) In cases where none of those things are present, you are much less likely to see autism. Do I have “science” in the form of quantified studies to back up those statements? No, not really.  Just a huge pile of anecdotes. Why do you think that is?  Well, if you’re cynical like me, you’ll think it’s because nobody wants to blame the venerable cash cow of vaccines for making children sick.

(There are several other huge red flags, by the way. Children who had gastrointestinal issues and/or severe food allergies before developing autism are common. You should tread very carefully if you see these issues in your children. Will a mainstream pediatrician tell you this? Nope. I know because my son had both, along with a history of antibiotic use and his (former) pediatrician was very eager to vaccinate him. Thank God, I didn’t listen to her and instead listened to other parents. As a result, his apraxia turned out to be relatively easy to turn around.)

One of my favorite moments from the House Committee on Oversight and Government Reform Hearing on the Federal Response to Autism, was when Congressman Paul Gosar of Arizona said, 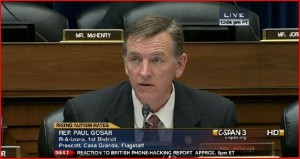 “. . . I can understand their (referring to families in the gallery) frustration. It’s mortifying . . . coordination in studies is inherently poor, absolutely horrible. . . .  But we have people that are so motivated in these families . . . . And I’m finding more from them, than I am the medical research. And it seems to me we’re focusing something wrong here. We should be focusing on the family. They’re telling you what’s going on. They’re frustrated because the research is cylindrical. They (the researchers) are not sharing.  They’re not coordinating. At all. And they’re (indicating families in the gallery) telling you what’s wrong and what’s going on. And we should be focusing on the family and utilizing that as a coordinating factor.”

I can only respond, “Amen, Congressman. Amen.”

22 Responses to No One Knows. Or Do They?