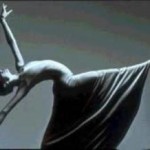 Sometimes, we have to settle accounts: put things or people in place.

Settling accounts can be a positive thing. It’s when you pay off your debts. In my personal battle to find the path to recovery and give my precious child a chance at a “normal life,” only a few people supported me. Some of them are parents who didn’t even have a child with common allergies or asthma, much less a development disability, but they encouraged and rooted for me every step of the way. To them — and they know who they are — I’m deeply grateful for this priceless empowerment. I may never be able to settle accounts with them, nor give back in goodness anything close to what they gave me. To these people, I will always remain humbly and deeply indebted.

On this list are those who tried to discourage me, who mocked my efforts in a cynical and hurtful way, who showed no compassion, no empathy, who repeated over and over that my son was condemned and that nothing could be done to turn things around. Over time, I drew up this list in my head.

In the beginning, I went through the “system”:  doctors, therapists, schoolteachers — anyone and everyone in “the profession” who I thought could, would, should help me, help my child. I was uninformed, naïve, gullible, hopeless, fearful, and, worst of all, alone! These people made me cry buckets, spend sleepless nights rethinking what they told me, vomit from anxiety, overanalyze medical facts. They confused me, destabilized me, and sent me off on an emotional rollercoaster I didn’t need to be on, considering I needed to muster as much strength and courage as possible to research recovery treatments for my son.

Now that my son is well on his way to recovery, judge me if you want, but I need to settle accounts with these people — the people on my imaginary “hit list”. I’m looking forward to the day I can face them again and shove it in their faces that they were wrong:

That recovery is possible,

That my son has recovered,

That they know nothing, that they are ignorant and prejudiced, and that their stubbornness and ego are failing parents and children and standing in the way of progress.

I’m going to hit them with the truth…

Yes, over the past four years, I‘ve had time to fantasize about it. I have made up very elaborate scenarios in my head and thought through every facet of “my movies.” Each time I replayed them the punchlines got better, nastier, and gutsier.

I took my son to be evaluated by this piece of work.  I thought I was prepared for the worst, but I was not prepared for this. She was annoyed from the instant we walked into her office, and began by telling us she was waiting for an important call and may therefore have to cut it short. Yes, really!  I swear that is what she actually said. As I watched the evaluation from the two-way mirror, she made absolutely no attempt whatsoever to warm up to my son. He sat there, intimidated, totally phased out by this strange environment, his eyes roving around the room trying to find a reference mark. There weren’t any. She was cold as ice, didn’t reach out to him, didn’t reassure him in any way. He tried his best, but he didn’t have a chance in hell. No one would. Twenty minutes into this farce of an evaluation, she spoke to the mirror and dryly let us know she was cutting it short, the child was not collaborating, there was no hope and she’d be sending her report by mail. Choking on tears and nauseated, I was in a stunned daze. I took my son’s hand and walked out without looking back. There was nothing to say. I knew in my heart what had gone down there was wrong and sick.

She became the first target on my “hit list”. 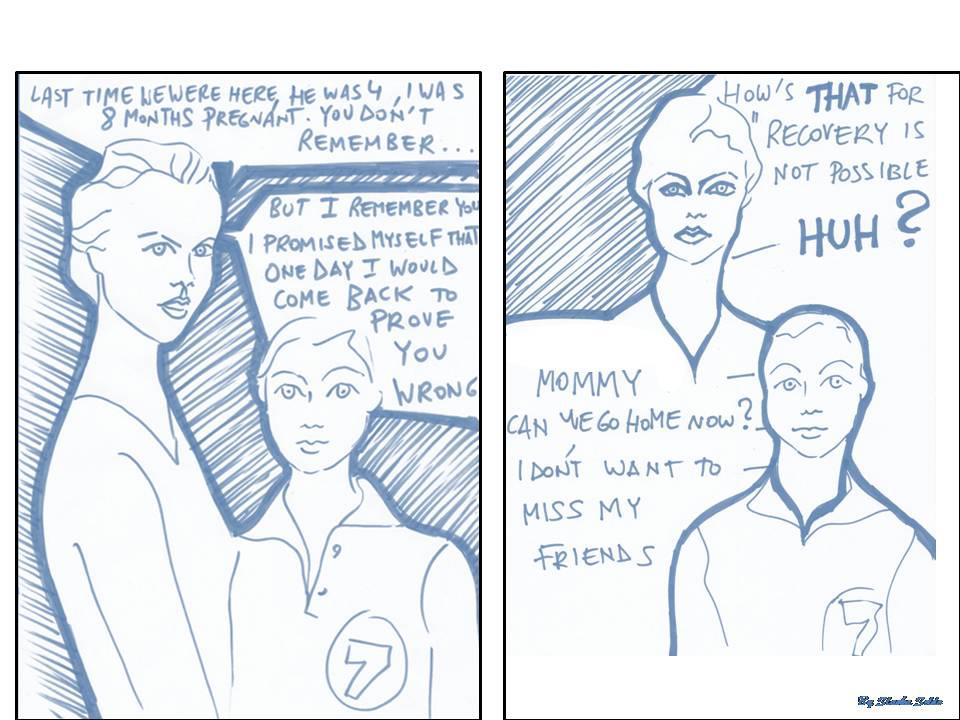 I had just started my son on a MB12 treatment and I so was filled with excitement and hope that — silly, silly me! — I told her about it. Well, it took Miss Know-It-All only a few seconds to rain on my parade. Actually it was a downpour of negativity. She ripped into me and, dripping condescension, she snapped that no treatment, protocol, much less a vitamin of any kind, existed in the world that would help my son reverse his severe language handicap. And if that was not enough of a blow, she followed up with a written evaluation that was so devoid of any hope that I broke down when I read it and swore I would read it again only when he was cured. Today, my son has caught up 80% of his deficit. He communicates clearly and asks questions constantly. He is everything she said he would never be, and nothing like the way she described him three years ago.

As far as I’m concerned she can shove her evaluation you know where, and she’s number two on my “hit list”.

When I learned I could help my son with a special diet (gluten-free, casein-free, soy-free , etc), of course I discussed it with his pediatrician. What was I thinking? He told me not to waste my time with “these nonsense diets” that promise the impossible and for which there is no scientific proof.  I insisted that as far as I was concerned, the fact that other parents had tried it and testified it had helped their children a lot, was convincing enough for me to give it a try. It was certainly better than doing nothing, as he suggested. Later, he was somewhat more cooperative (approving blood tests), but he never, ever tried to understand what I was doing. He didn’t care. He wasn’t open-minded; he just didn’t believe “recovery” was possible.

He does not stand alone on my “hit list”. He is accompanied by all doctors who refuse to see the truth: the ones who stand blatantly in front of parents and say:

“Nope, didn’t happen to your child. You are wrong.”

“There is no proof.”

Doctors, who refuse to listen, read and learn about what’s happening to an entire generation of children. 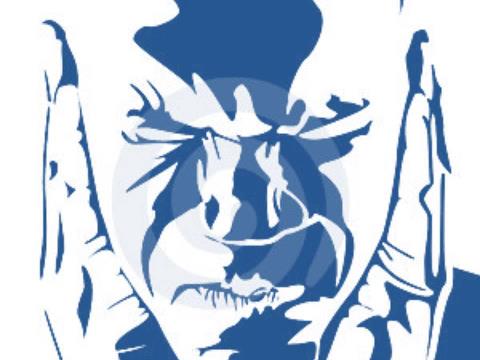 I subsequently pulled him out of her school, but while he was there, she never took me seriously when I tried to tell her I was doing things to help my son get better. She didn’t want to hear anything and, in retrospect, I don’t know why, for the life of me, I even tried to discuss anything with her. She would always cut me off and interject that there is no scientific proof for any of my interventions and remedies. It was a total waste of my time and my breath. After I pulled him out of her school, I would sometimes run into her here and there, and she would inquire about my son and how he was doing and, of course, I was enthusiastic about his progress. I didn’t get into details and never mentioned that the road to recovery goes both up AND down — especially when the child is going through some gruesome detox treatment. But as luck would have it, she once ran into my husband and my son at the grocery store when my son was in one of those down periods. He was throwing a full-fledged tantrum. So what? I’ve seen many children throw tantrums at the supermarket. But, of course, the next time I ran into her, she made it a point to mention that she saw my son, that he “didn’t look well at all,” and inquired with cynicism if I was still continuing with these treatments, because “apparently they weren’t working.”

She, too, is on my “hit list”, and I’m waiting for her around the corner. One day, I will bring my son to her and watch her mouth drop.

These are the people I seek revenge on. Not a harmful revenge, by any means, only the sweet satisfaction of watching them eat their words and making them regret their behavior. These are all educated professionals who are supposed to help us get better. That they go by the book —  and are reluctant to give credit to alternative treatments — is one thing, but wanton destructiveness is another.

These are other folks I would like to face one day with the proof that recovery is possible. I’m thinking of the parents whose children have just been diagnosed with any development disability, from autism, to allergies, asthma, ADHD, or speech delays, and with whom I share my story wholeheartedly in the hope of convincing them to bypass the standard “medical” crap that will send them on the emotional rollercoaster I was once on. I want to help save them time by sharing my experience of hope with them — and letting them know that recovery is possible. I see the fear in their eyes, I know what they are thinking, the choice they’ve already made, the blind belief that only doctors know. I try to tell them that they should not limit themselves or their children to the medical therapies which are necessary, but not sufficient, that there is more they can do. I can feel the door slamming on me, but I persist when they change the subject and ultimately they avoid me altogether. I want to scream that recovery does not happen from marching for Autism Speaks! The funds collected are not used for finding a cure or helping families. I know they’re afraid; I was once also. I want to spare them that horrible phase.

Yes, I want to face them one day, but today these people are not on my “hit list”. They are on my hope and pray list. I hope and pray they will see the light at the end of the tunnel and follow it immediately. More than anything, I hope and pray the day I face them their children will be completely recovered, because they will have found the courage to reach out to the people who can help them.

While there is no scientific justification for it, the traditional medical view is that our children have an incurable genetic condition. And unless you have a randomized, double-blind, placebo-controlled trial proving a particular treatment works, people tend to default to the “incurable genetic condition” belief. What kind of logic is that? Neither is “proven,” but that doesn’t stop doctors and professionals from inappropriately discouraging parents.

People need to start listening to those who have successfully made big changes in their children’s lives and are walking the walk.

We may not be there yet, but we are well on our way.  Every step forward reminds us of how extremely satisfying this is going to be.

My “hit list” is just a settling of accounts with the people who tried to crush my dream, and relentlessly predicted my doom with harsh and hurtful criticism. Sometimes, it feels just plain good to slap them with the truth, make them squirm and remind them that:

“When people determine your dream, predict your doom or criticize you, they’re telling you their story, not yours.”  — Cynthia Occelli

This entry was posted in Blogs by Thinking Moms' Revolution, Prima TMR and tagged autism, recovery. Bookmark the permalink.