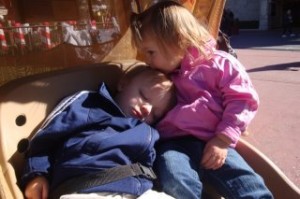 My daughter R, Harry’s twin, is the exact opposite of Autism.  She started babbling at six and a half months saying, “mamadadababa” and has never stopped talking.  We always say if Harry had only a tenth of what she has….a twentieth….a hundredth…he would be totally fine.

As much as I wish for that to be true, I wouldn’t change her for anything.  She is light, love, exuberance.  She radiates a passion for life and is a true free spirit. Unencumbered by self-consciousness, she dances and sings to whatever happens to catch her ear.  Her energy is magnetic and people are drawn to her.  Her laughter is contagious.  She’s a hugger.  A true princess (in full costume, of course), she is always looking for a prince to kiss.  She wears pink clothes, eats pink ice cream, and demands pink lip gloss (but doesn’t get it).  She was born accessorizing and has never met a circular object she couldn’t turn into a bracelet.  At 18 months, she could maneuver in 4-inch platform heels.  She’s been getting into my makeup for years now (and she’s only four) and prefers the Chanel nail polish…of course.  And mind you, I didn’t encourage any of this.  I almost always wear jeans, but she considers them punishment.  She wears only dresses, and insists on picking them out herself – big-skirted, twirly, fancy dresses each and every day.  I totally and completely love every bit of her dramatic, over-the-top, real-life Fancy Nancy Pinkalicious self. 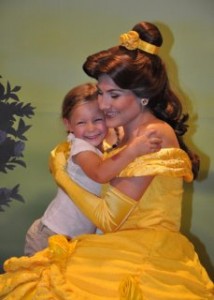 But there’s something more.  She is utterly devoted to her twin. When they were infants in the pack and play, she would curl right up into him.  When he couldn’t hear any of us, she would get right in his face and talk to him, and even in the worst of it, she could make him laugh.  She is the best therapist he has ever had because she is relentless.  She calls him “My Harrison” or “My Prince” interchangeably.  Because of her, he has no choice but to engage in our world.  She holds his hand in hers and presses it to her face as she sucks her thumb, curls up on the chair with him and cuddles, can tell us exactly what he wants at any given time, and generally considers him her life-sized doll. 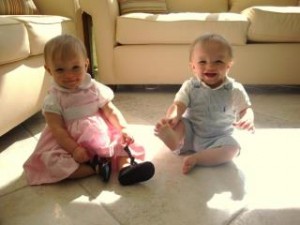 When they shared a nursery and were both in cribs, I would watch her engage him on the monitor. She would beckon him to the side of his crib closest to her where she would grab his hand and sing him songs.  She would do silly things or make silly noises to get him to laugh which, back then, was a rarity.  Harry has such a beautiful laugh, but for a while only she could bring it out of him.

When she realized he wasn’t talking like she did, we told her he was trying. She would sit with him face- to-face for what seemed like hours saying, “Say BALL Harrison.  BALL.”  When he refused to eat, she would pick up his spoon and feed him, and wouldn’t you know it, he’d open his mouth for her when moments before he’d clamped it shut for me.  She gives him carte blanche…if she is playing with her leap pad and he wants it, she hands it over gladly, something she would never do for her older brother, or anyone else for that matter.

She is his biggest cheerleader.  If he says a word, she yells, “Mommy, he talked!” and tells him what a good job he’s doing.   She uses his hands to do the movements to “Head, Shoulders, Knees and Toes” as she sings it for him.  She mothers him in a very cute and affectionate way.  There is a deep bond there. Autism-be-damned, she’ll drag him out of this if she has to.

She’s not a saint, by any means.  She doesn’t listen, has her own agenda (always), and does not give a hoot what other people think.  I have a hard time disciplining that though, because I know that one day when Harry is mainstreamed, she will need every ounce of that spunk to deal with peers who may not be as accepting of her brother as she is.  I will never make his care her responsibility, but I know I will never have to ask her to help him.  He is part of her in many ways, and she is naturally his fierce defender.   As sweet as she looks, she won’t hesitate to call out a kid for cutting in front of Harry in line at the slide, and I’ve seen her throw elbows at kids who push past him.  It makes me smile, to be honest.

I used to kind of feel bad for Harry.  I mean, she is all over him, all the time.  Sometimes I think that someday when he is recovered, he’ll give her a nice hard shove and say, “Let go of my hand already!”  He never gets any breathing room at all but, I don’t know, maybe that’s a good thing, right?  She really IS the most effective person on his team because she loves him in a way that even I don’t fully understand.  She treats him like he belongs to her and maybe, in a way, he IS a little bit hers.

Over the last few weeks, something big has happened here.  The first time it happened, it scared me.  I opened the door to Harry’s room to check on him before I went to sleep and he wasn’t in his bed.  I flew into a panic checking the doors downstairs, checking the bathtub (don’t ask me why), the closets…nothing.  When I finally found him, I had tears in my eyes.  He had climbed up into R’s bed and was fast asleep, snuggled right up on her.

It kept happening, over and over, and now I’d say it happens almost every night.  I put him to sleep in his own bed, but I find him curled up in hers, using her tummy as a pillow, or sleeping side by side holding her hand.  There are a lot of things that Autism has stolen from Harry: speech, motor planning, bowel function. We are slowly winning those back.  There is one thing, however, it can never steal…and he is lucky, really lucky, to have her. 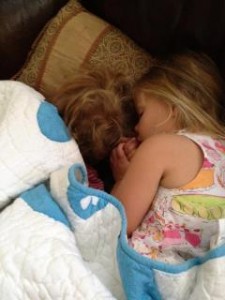