Third in a series of blogs reprinted by permission of the author from the website Vaccine Papers. The original is located here. This paper covers the experimental evidence demonstrating that the same prenatal immune activation that causes autistic behavior and brain changes in mice, as well as high levels of IL-6 cytokines, a necessary and sufficient condition for the development of autism, causes similarly high levels of IL-6 and autistic behaviors in primates, which are much more biologically similar to humans than mice are.

All the studies described in parts 1 and 2 use mice. Autism is always diagnosed by behavior; there is at present no objective blood test for autism. Consequently, some people question the diagnosis of “autism” in mice, since mouse behavior is so different from human behavior. This is a reasonable concern.

Responding to this reasonable concern, the Patterson group has repeated the maternal immune activation experiments with monkeys. Monkeys are an excellent animal to use in autism experiments, because they have much more complex social interactions, more like humans.

Monkeys are difficult to use in research, however. They are much more expensive than mice. They require more space and more time than mice. That’s why the mouse studies were completed first. Monkey studies were not pursued until there was a sufficient level of understanding of immune activation. This is normal research progression. It’s unwise to perform experiments with monkeys before effects in mouse models are thoroughly understood.

Three papers have been published on immune activation experiments in monkeys, all by the Patterson group at Cal Tech:

Offspring monkeys were then subjected to behavioral tests as infants and as juveniles.

Attachment Test
This test is performed with weaned infants, at 6-12 months of age. Infants are separated from their mothers for four days and observed for “self-soothing” behaviors (e.g. tantrums). Results are shown below. 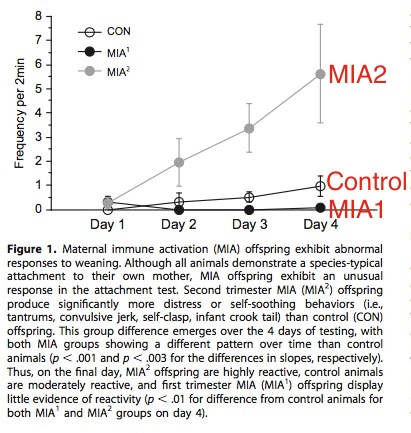 The MIA2 offspring displayed a dramatic increase in distress/self-soothing behaviors over the 4- day testing period that was not observed in the control animals. In contrast, the MIA1 offspring produced almost none of these behaviors.

Behavioral Observations
Autism is always diagnosed in humans by its behavioral characteristics. There is no objective or laboratory (e.g. blood) test for autism. The core symptoms of autism are

At ages of 10, 17, and 22 months, monkeys were subjected to tests for these autism behaviors.

Above: Monkeys exposed to immune activation display repetitive behavior, reduced vocalization, and inappropriate social behavior. These are the three core symptoms of autism. 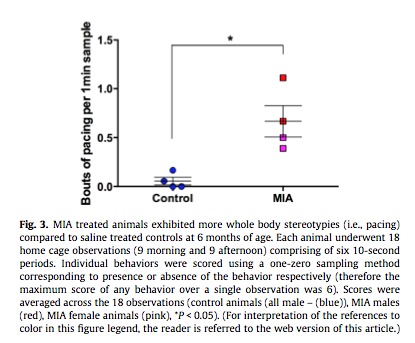 Some of these behavioral changes increased as the monkeys matured. The paper states

Stereotypic behaviors, for example, are one of the diagnostic features of ASD and were consistently observed throughout postnatal development in the MIA2 offspring and to a lesser extent in the MIA1 offspring.

We suggest that the inappropriate social approach behaviors observed in the animal model may be reminiscent of the active but odd subtype of social interaction style described in autistic spectrum disorder and the complex social functioning impairments in schizophrenia.

Social Attention
Eye tracking was used to monitor how the monkeys looked at monkey faces. The duration of face-fixation, and location of the fixation (e.g. on the eye or nose) were measured. 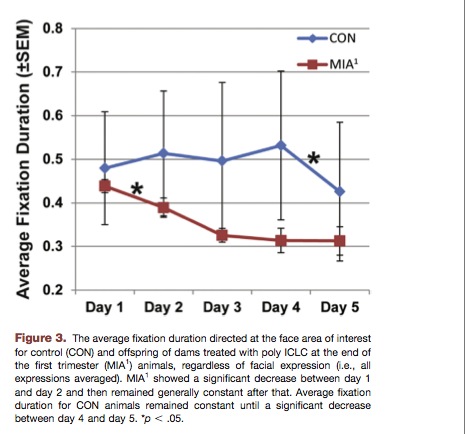 Other changes in facial fixation were also observed. For example, MIA1 monkeys did not look at the eye when looking at monkey faces. See paper #2 for details. Paper #2 states

The lack of attention to the eye region exhibited by MIA1 animals represents a significant departure from social processing in normal macaques and typically developing humans and parallels findings in both autistic spectrum disorder and schizophrenia clinical populations.

Many individuals with autistic spectrum disorder also demonstrate abnormal fixation patterns when viewing faces, characterized by a lack of fixation in the eye region and a possible compensatory strategy of fixating on the mouth region.

Morphological Changes
Paper #3 provides the first preliminary results of investigation of the monkey brains. The monkeys were killed at ages 41-46 months.

Neuron morphology (physical features of dendrites) was analyzed. Immune activation was found to affect number of dendrites and dendrite diameter in specific locations on neurons.

Oblique dendrites = Dendrites that branch from apical dendrites. They are small “branches.”

It is unknown if these specific findings are present in human disease, but the authors state

The goal of the present study was to determine if this novel, nonhuman primate model of MIA model exhibits neuropathology relevant to human neuropsychiatric diseases. We elected to focus the initial evaluation of the nonhuman primate model in the DLPFC – a region of prefrontal cortex in humans and nonhuman primates that is essential for high order cognitive processes and implicated in social cognition (Arnsten, 2011). DLPFC dysfunction is strongly implicated in SZ (Barch and Ceaser, 2012; Lesh et al., 2013; Ursu et al., 2011) and to a lesser extent ASD (Morgan et al., 2012).

Although neuronal morphology in DLPFC has not been specifically evaluated in postmortem ASD brains, changes in pyramidal cell morphology have been described in other cortical regions.

Here are the results discussed above:

Above: Immune activation caused changes in the dendrite diameter and number of oblique dendrites. These results may be relevant to schizophrenia and autism.

Conclusion
These findings clearly demonstrate that monkeys are affected by immune activation, just like mice. Monkeys exposed to immune activation display behaviors that closely resemble human autism and have physical signs of neuropathology.

Click here to go back to Part 2: Interleukin-6 and Autism.

Click here to see a listing of other blogs in this series.