Posted on May 1, 2012 by Thinking Moms' Revolution 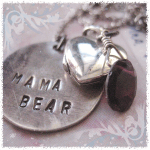 Picture this scene:  It’s 2 AM. The house is quiet other than the soft static of the video monitor 12 inches from my head. “Ahhhh, she has an infant”, you say? No. No more infants in my house, but rather a 4-year-old with asthma. My eyes open and close every few minutes. I look and wait to see his chest rise and descend, so I can close my eyes again. He takes a deep, slow breath and I relax

I close my eyes and relax. Static… then the dreaded cough. I wait. One leg already on the floor, but I wait. Please God don’t let him cough again… please. Then another cough… then another… and another. I jump out of bed and grab the Xopenex . Mask in place as I see him begin to gasp. I caress his little face and sing a song as I wait for the mist to work. I see his rapid breaths begin to slow again and the cough begin to subside. BUT… his heart is racing. His little body is tight and exhausted. His belly is cramping from the workout. When your child is having an attack, he tries to compensate for the lack of oxygen in his lungs by using their belly muscles…..it’s hard work. I check his lips and fingernails. Are they blue? Even a little bit? Not this time. Thank you God. This time wasn’t so bad, but you never know when the next one will hit.

When Nicholas was born, he spent 8 days in the NICU. When I went in to see him for the first time, I was shocked by what I saw. He was a big baby. Chubby and beautiful. He was lying in the incubator and that was the first time I saw the dreaded “belly breathing”. The nurse informed me that he was on 100% oxygen and that he was finally resting peacefully. I sat there and the tears rolled down my face. I just wanted to hold my baby. I reached in and touched his hand. “Breathe baby. Breathe”, I whispered. At that moment, I would have given my last breath just to make his next one easier.

The next few days were like a roller coaster ride. They tried to wean him off the oxygen, but every time I got excited, they had to raise it again. He was also jaundiced and really uncomfortable in every way. After 8 long days, he was breathing on his own and ready to be released. I had to keep taking him back to the hospital every day for a heel prick to check liver function, but for the most part we were elated to have him home.

But something wasn’t right. He was always gurgling and wheezing. He was a January baby so I was practically boiling every person as they walked through the door. Since I had 2 older children, my attempts to keep germs out were in vain. I called the pediatrician CONSTANTLY. Each doctor that saw him gave me a different diagnosis. I got everything from “noisy baby syndrome” (where a cartilage in the back of the throat hasn’t hardened yet), bronchitis, “a simple cold”, to “he is just fine”. I was so frustrated. I finally became fed up and went back to our old pediatrician 45 minutes away. It was worth the trip. He immediately diagnosed Nicholas with asthma and wrote a script for a nebulizer and albuterol.

The next few years were awful. Every cold turned into a hospital stay. Once he started coughing, he just couldn’t stop. I would fly down the highway listening to him cough and if he didn’t it was even worse. I’d panic. Is he breathing???? The pulse-ox on his tiny finger always showed a number too low, requiring an admission. They would piggyback the albuterol and we’d watch his heart rate sky rocket. They eventually switched him to the expensive “good stuff” called Xopenex which was a purer form of albuterol and didn’t have such a drastic affect on his heart rate.

I’d sit in a chair and watch his little body…exhausted from struggling for air. Again, I would have given my last breath for him.

When Nicholas had his first seizure, my life changed. I’ll never be the same. He never had convulsions, just turned blue. I thought asthma had taken him from me. It was the worst 3 minutes of my life. Holding your limp child in your arms as you stare at his beautiful face and watch him turn blue, truly is life altering. After that hospital visit, we decided to set up the video monitors in his room. I’d watch every movement, every sound, every breath, every night.

Why is this different with an ASD child you say? I’ll tell you. My brother and were talking once about how we loved babies and everything about that stage of life. He then said “As much as I love it, it’s the most stressful time and I’d like to just fast forward through it”. I didn’t understand what he meant so I questioned him. He replied, “When they are infants, they can’t tell you what hurts or why they are uncomfortable. It’s a big guessing game and extremely stressful”. He was right. When you have a child who either doesn’t speak, or cannot communicate with you in an efficient manner, you are left to guess. I would have to try and read the signs. Is he coming down with a cold? Is he screaming because he is in pain? Can he breathe easily? Is he okay?

Even though Nicholas was verbal, he could never tell me what he was feeling or warn me in advance. I was left to guess or make a call. Do I take him to the ER? Do I start him on the medicine to try and prevent it? Do I call 911?

Once I became proactive and we began to see a DAN doctor, things changed. We started Nicky on Methyl-B12 and couldn’t believe the change. Besides the boost in language, his episodes became less and less frequent, and less and less severe. Eventually, the Xopenex began to expire before it was ever used. His immune system was strong again and we rarely used the nebulizer. My life would have been very different in the earlier months/years had I known about Methyl -B12. It literally helped reboot his immune system. it was the first of many supplements and therapies we began to learn about and focus on. CoQ-10 and Enhansa followed and eventually led us to Homeopathy. We then found the greatest therapy of all: The Thinking moms!!!!! Every question I had was answered… or at least researched to help. Someone had experienced each thing I was going through and was able to offer advice on what worked and what didn’t for their child. It was amazing. i was healing my son and healing my soul at the same time.

By the age of 6, he was able to tell us what he was feeling. After a bad cold, Nicky had an episode and I needed to break out the nebulizer. We finished the treatment and I asked if he was okay. He looked at me and said “I need one more mommy”. I gave him another round and when he was done he said “I can breathe now”. I’ll never forget that day. The day I didn’t have to guess. The day that he was able to tell me how he was feeling. The day that asthma lost.

I look back now and remember what those sleepless nights were like. I remember the buzz of the monitor and what it felt like waiting for that awful cough. My heart breaks for these kids. My heart breaks for their parents. Watching your child struggle for air is HORRIFIC!!!!! We take so much for granted. So now I want you to take a deep breath… exhale… and be grateful that you can do it with ease.

This entry was posted in Uncategorized. Bookmark the permalink.

4 Responses to Waiting To Exhale