(My daughter turned 13 on Sunday. Yep, she was born on April Fool’s Day.  She asked me to call her “Trinity” for the purposes of this blog. So, Trinity, this one’s for you!)

(This post draws on data from the CDC of the United States, but that in no way implies that we are only interested in the welfare of American children. This is a global fight.)

If you’re reading this blog, you know by now that the CDC released new autism prevalence numbers last Thursday.  Yesterday I attended the “Autism is 1 in 88” press conference presented by grassroots autism advocacy organizations. If you haven’t seen it, I recommend it. Each and every speaker comes across as intelligent, knowledgeable, and fed up. Therefore, the press will do its best to ignore it, and we will have to make it go viral. Mark Blaxill spoke at one point about one of my favorite under-represented topics:  We Thinking Moms are not JUST fighting for the 1 in 88 currently diagnosed with an autism spectrum disorder (as if that’s not enough); we’re also fighting for the nearly 50% of American children that are chronically ill, many of them requiring daily medications.  This country spends more money on health care — including all that preventative health care — per capita than any other country, and yet our kids are getting sicker and sicker.  Let that fact sink in. Once you do, you have to start asking questions. Big questions.

My journey to TMR began with my son’s health issues. As a tiny baby he had tremendous difficulty sleeping for more than an hour or two at a time. His sister wasn’t much of a sleeper, so poor sleep wasn’t a shock, but this was different. I realized after a while that his nose was stuffing up and waking him up. Hour after hour, night after night. Needless to say, this was a problem in our house. (Mom gets really cranky when she doesn’t get sleep!)  His doc was no help whatsoever, but on my own I figured out that he was much better if I didn’t eat any wheat or dairy.  Then a cousin told me about NAET, an allergy elimination technique that knocked his allergies on their head and improved our lives enormously.

Just as we were getting the allergy stuff taken care of, he came down with his second ear infection. The ER doc prescribed a high-dose antibiotic. “Bryce” was just starting to speak. Or so I thought. A few months later, he still had only four “words” and they were different words! I was baffled: his sister, who is HIGHLY verbal, didn’t babble and didn’t say her first word (mama) till she was about 12 months old. Bryce babbled a lot and came up with dada at 9 months. I was sure he was going to blow her out of the water and kept waiting for the flood of words to begin.

At 19 months, I was still waiting. I had his hearing checked: fine. I had him evaluated for Early Intervention, but he didn’t qualify because his receptive language was fine.  A couple of months of mostly fruitless speech therapy went by, and as I was semi-desperately Googling one day I came across this website dedicated to “Childhood Apraxia of Speech.”  I read the description and said, “That’s him!”  The prognosis did not look good.  It seemed he would require intensive speech therapy and would likely always retain marks of his difficulty.

A good friend happened to ask me soon after if I’d considered apraxia. I said, “Yes! That’s what I think it is!” I couldn’t believe she’d heard of it. This friend has twins a year older than Bryce and one of them had PDD-NOS. She was plugged into this amazing network of moms who were doing some kick-ass biomedical interventions. She told me two of them had kids with apraxia, and one in particular had made great strides. A few conversations in, and I was hooked. I read The Late Talker and started high-dose fish oils right around Bryce’s second birthday (he was still nursing).  Then I read Enzymes for Autism and Other Neurological Disorders and started him on enzymes and probiotics. Every time I made a change or added something we got a big jump in speech. The kid who couldn’t put two syllables together on his second birthday started using sentences a few weeks later.  (Today, three and a half years later, he bears almost no trace of his previous disability.)  Then I went on to Healing the New Childhood Epidemics: Autism, ADHD, Asthma and Allergies (affectionately called “The Four A’s Book”).  That’s when I recognized my daughter, too. According to this book, she had ADHD and her case was eerily similar to the young girl in the book who had PANDAS.  Turns out, similar therapies were useful for her, too.  I started her on fish oils and her anxiety level dropped literally overnight.  Added in some other supplements that Andy Cutler recommended for OCD and anxiety (I didn’t even know who Andy Cutler was yet), and we were suddenly operating in a different territory.

So, wait a minute . . . I was getting advice on treating my kids’ speech disorder and ADHD from moms and doctors who were dealing with autism. But my kids didn’t have autism. Not even close. And yet . . . they responded to the same treatments and had similar health histories (except that I stopped vaccinating when my daughter was 15 months old). Was it possible that their issues came from the same mechanism as autism, only in a less extreme form? 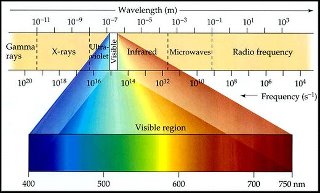 I began viewing the “autism spectrum” differently.  Suddenly it seemed there was an “invisible” band on the “less affected” end of the spectrum, just as infrared light adjoins ROY G BIV on the electromagnetic spectrum. Infrared light has all the same properties as visible light, except that it does not excite the rods and cones in your eyes. That band may be invisible, but it’s also huge! It’s filled with kids who have food allergies, get recurrent ear infections, have multiple rounds of antibiotics before they’re two, and can’t sleep, breathe, eat, or learn without difficulty or medications. It’s filled with older kids with learning disabilities, ADHD, and sensory processing disorders.

I’ve seen some version of this progression over and over again. Child first presents with some kind of food allergy or intolerance. Often it begins before the child is on solid food. Then child gets one or more ear infections and is treated with antibiotics which kill any good gut bacteria child might still have had. After the antibiotics, the child has either chronic constipation or diarrhea. Perhaps the child has sensory processing issues making certain types of activity excruciating for all concerned. Perhaps the child has trouble settling down, inviting thoughts of hyperactivity or ADD. At some point in this scenario, the child receives a number of vaccinations on a day when the child is not feeling up to par, perhaps even on antibiotics. Child has fever and seizures, and screams incessantly. Parents call pediatrician in a panic and they’re told it’s not a problem. Just give Tylenol and everything will be fine. If that doesn’t do it, child receives another round of vaccines a few months later. Child suddenly loses previously acquired skills and no longer pays attention to people and objects he/she previously loved. Other allergies (and asthma) show up.  Seizures become more common. Mitochondrial damage becomes apparent. OCD and anxiety cannot be shaken.

How many children do you know who have one or more of the health issues mentioned in the last paragraph? Personally, I can’t think of more than a handful that DON’T have any.  Asthma, life-threatening food allergies, ADHD, sensory processing disorders, OCD, anxiety, learning disabilities, and chronic gut issues run rampant in children these days.  “Autism awareness” takes on a whole new meaning when you realize there’s an invisible band to the spectrum that is MUCH larger than the visible band.

As Louise Kuo Habakus said in the press conference yesterday, “You think this is not your problem? This IS your problem.”  It is everyone’s problem. No country can afford chronic illness in half of its citizens.