Harry’s brother G., my oldest at 6, is a really funny kid.  Like, hysterical.  He has been supplying me with funny facebook statuses ever since he could talk.  I remember when he was 18 months old and noticed the shadow of his hand on the wall.  He walked down the corridor smacking the wall with his hand yelling, “MY WALL! MY WALL!” very angrily at the shadow until the light shifted and the shadow disappeared.  He gave a smug smile and a curt nod.  He won that battle; the wall was his.  When he finally potty trained at 3 ½, he was obsessed with peeing in anything but a toilet.  We were stuck in the parking garage outside of Nordstrom with the two babies in the car and he insisted he had to pee right then.  I let him, and he got back into the car saying, “I peed in a parking garage.  I can check that off the list!”  Um, do you even HAVE a list at three?

He finished Kindergarten in May and it was a LONG year.  He was top of his class in reading and math, but was not as successful in keeping his mouth shut, and distracted many of his classmates throughout the day.  His teacher told us numerous times that his saving grace was that she couldn’t stop laughing at the things he said.  He might talk out of turn, but he was, at least, entertaining.  He came home from school with a note one day that stated he needed to practice self-control, and needed to work on raising his hand before he spoke.  When questioned, he threw major attitude back at me and said, “It’s YOUR fault!” When I asked why he said, “I’m supposed to be learning from YOU, and you never raise your hand, you always interrupt me, and you never wait your turn to talk.”

The thing that made me most proud this last year was that his teacher told me he was always kind to his classmates.  He was never mean and was always helpful, and he didn’t participate in name calling.  We still haven’t had THE TALK about Harry’s autism with G.(though it’s high time we did), but he has heard a lot about what is and is not acceptable in terms of how we treat others.  Right or wrong, I want to keep him innocent as long as I can.  He knows that Harry goes to a special school that is helping him learn to speak, and has never really questioned beyond that. I just don’t want to lose that funny kid to the weight of today’s very serious issues.

G. was three when Harry was diagnosed, and we switched him from his (what now seems insanely) expensive school to a daycare that was more moderately priced so we could accommodate Harry’s rising costs.  The new school was still great though, and I liked that the director had a background in special needs and that they were inclusive.  He came home one day with scratches on his face saying that he didn’t like a kid named “Hunter” (yes, I changed the name).  Seemed Hunter was really aggressive and wanted G. to play with him, but G. wanted to play with his buddy Aidan.  I signed a boo-boo report at the front desk and talked to G. about how it wasn’t nice that Hunter scratched him but maybe to try to include Hunter when he played, and promptly forgot about it. (And if you think that is too nonchalant, remind me to tell you about G’s vampire phase at his old school sometime—the scratches were minor compared to the damage he inflicted.  Karma.)

But the next week he had a bruise on his neck and when I questioned him he said that Hunter picked him up and choked him on the playground (I watched the video footage later—the teachers were right there and paying attention, it just happened really quickly).  I flew into the director’s office, and she sat us down and explained that Hunter had autism.  I softened.  I mean, how could I be mad when Harry might cause this same situation at some point down the line?  How would I want him to be treated?  Could I discount G’s feelings at this point?  He was now scared of Hunter’s unpredictability and he would not play with him because he knew he was going to get hurt.  The director also explained that autism or not, safety had to be paramount and that similar things had happened to a few other kids in the class.  They did not have the staff to work as closely as needed with Hunter on social skills, and his parents had opted to move to another facility that was better equipped to work with him one on one.  Situation avoided.

This summer G. has been doing surf camp and he loves it.  Especially skim boarding.  After practicing every weekday at camp, he drags us all to the beach on the weekend so he can skim more.  He doesn’t care that he falls, and when he wipes out he shouts, “FAIL!” at himself, gets back up and tries again.  The camp was supposed to be a one week program, but G. insisted on going back each week, so at this point he knows all the lifeguards and counselors.  They think he is funny and cute, and he gets a lot of attention because he is only six and works hard learning the sports.

I was away for a few days and my husband called Thursday to say G. was bullied at camp.  Really?  Bullied?  Again, I tend to downplay, but my husband said he didn’t even want to go back—a 180 from the day before when the sun rose and set by surf camp.  G said a big kid named “John” that was 11 kept following him shouting “FAIL!” whenever he fell.  I wondered aloud what the difference was as G. shouts that all the time.  He says it was different…not funny like they all say it.  This kid is mean.  And not only mean, but it seems, incessant.  According to G., he kept following him yelling “fail”, picking on him for everything, telling him he sucked (Thanks John, by the way for that new household word.  Sigh).  G. said he left skimming to go by the surfboards to get away from him, but John followed him and did the same thing there.  He finally told a guard, but it made it worse.  I was really sad for G., and upset I wasn’t home to deal with the situation.  I mean, he is only six and this kid is 11.  John’s mom should know what happened.

My husband found the director Friday morning and guess what…

Say it with me people…

Doesn’t excuse the behavior, but explains everything…G. fits in and knows everyone, this kid wants to, and I am guessing has some obsessive tendencies/OCD as well.  My husband explains this to G. as best he can and John just happens to not go to camp that day…and it’s a one week program, so G. will not interact with him again.  Situation avoided.  Again.

But this situation will continue to happen because we continue to manufacture kids with autism at an alarming and astronomical rate.  We’ve treated Harry’s medical issues aggressively and relentlessly, and incorporated all kinds of behavioral therapies into our program, and we are LUCKY that he is a mellow kid without, at this point, aggressive tendencies.  I realize this is the flip side of what most special needs families deal with. Usually, it is the child with special needs that is teased, or tormented. In some ways, I was more prepared for that. How do I explain to G. that there are hundreds of kids in our area that may act just like Hunter and John?  How do I explain that Harry has the same diagnosis?  The innocence I have tried so hard to protect is merely a façade, created by me to avoid the conversation, because G. has already been affected by autism on many, many levels. 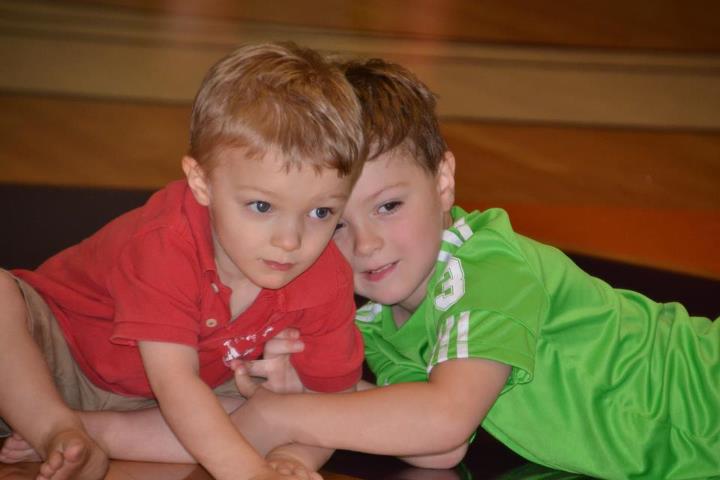 I wonder if this is how our parents felt when they needed to have the “How Babies are Made” talk, but I realize this is far, far worse.  Our parents never had to explain the things I am about to explain to G. because back in the 80’s, this epidemic didn’t exist in their world.  They knew no one with autism.  Now, every grandparent knows someone who has a child with autism.  They’ve had a steep learning curve too.

I am armed with Sunshine’s favourite book (watch the video here) and my own words to answer the questions of a six year old (and, inevitably, a 4 year old as R. doesn’t miss anything that goes on around here).  And I suppose I’ll need to tell Harry too as his receptive language is quite intact.  This makes me sad.  He was supposed to be better by now.  And we have come a long way, but he isn’t all better.  He’s still pre-verbal.  I am so angry that I have to have this conversation at all.  I’m angry I have to tell my kids to stay off the grass because of pesticides.  I’m angry that I can’t shop in a regular grocery store because most everything is genetically modified.  I’m angry I can’t buy my kids the character pajamas they want because they are sprayed with toxic chemical fire retardants. I’m angry that the people I am supposed to trust to look out for our best interest are bought and paid for by mega corporations interested in profit over most everything else.

How do you deal with a bully that really isn’t a bully at all, but a child as sick as one of your own?  The depths of compassion that our neuro-typical children will be expected to display will build character and awareness, but I am angry they will not even be entitled to their feelings…it is a lot to expect at a very young age and will change human dynamics for good and for bad.  We demand that they accommodate-and they have to-but it is not without consequence.  Indeed, the siblings of children with autism will change the world, but that change comes at a price.

I know many of you have stood where I now stand.  How did you tell your neuro-typical children what happened to your child with autism?  What do you wish you’d said?  Thanks in advance for your words of advice.