It Can Happen to You: Good Parents Make Mistakes – Sometimes Horrible Ones

He that is without sin among you, let him cast the first stone at her. – John 8:7

I’ve been noticing a trend lately – and I’m by no means the only one.

Part of this trend is laudable. Many of us didn’t feel that as children we received the best possible preparation for life, which would include a generous amount of parental loving support to help us over the difficult patches in life. An outgrowth of that feeling – and often a conscious acknowledgment of it – has been a determined effort to be the kind of parents that we ourselves would have wanted when we were younger. And this is a very, very good thing. It has resulted in “no bullying” policies in schools, parents who don’t dismiss reports of inappropriate touching from the “great family friend,” and efforts to make every child feel like a worthwhile member of society, no matter what challenges they face.

This attitude is perhaps best typified by the famous words of Max Ehrmann’s Desiderata: “You are a child of the universe, no less than the trees and the stars; you have a right to be here.”

But there is a sinister flip side to this “I want to be a better parent than I had” phenomenon, and that is the constant pressure to be perfect parents.

Countless media outlets have reported on the “Mommy Wars,” where mothers who choose specific parenting styles face off against mothers who choose different styles. Everyone seems to feel the need to have it all figured out – or at least to appear to do so. And that, my friends, is a very, very bad thing. Because life is constantly evolving and changing and presenting us with new challenges and ideas to think about and incorporate into our worldview. If we believe we have it all figured out to begin with, we will strongly resist the kinds of growth that life is all about. It also leaves no room for the unexpected, the unexplained, and the mysterious – not to mention the painful.

But the most important thing we miss out on if we need to be perfect parents is the ability to make mistakes. Being wrong. Screwing up. Revising the plan.\

So what? you’re thinking. Am I right? Who wants to make mistakes? Let’s just all do it right in the first place!

Except that’s not really possible, is it? It’s not possible with anything worth learning and getting “right,” and it’s especially not possible with parenting. As a parent, you simply cannot foresee and plan for all the possible permutations of personality, actions, and events that come with a whole new human being in the form of a child. Yeah, you’ll recognize some traits and think, Oh, she got that from me! – either with pride or chagrin –  but there will always be unknowns, things that your child will come up with that will surprise the heck out of you and make you think, Where the on earth did that come from? And that is a very, very good thing because one of kids’ jobs in life is to remind us parents that we don’t have it all figured out. That there is, in fact, no such thing.

Hang on, that’s so important let me repeat it: There is no such thing as having it all figured out. If your kids are not surprising you, they are not letting you in on who they are.

How do we teach our kids the resilience and humility to try again if we ourselves are not allowed to screw up and revise our approach? 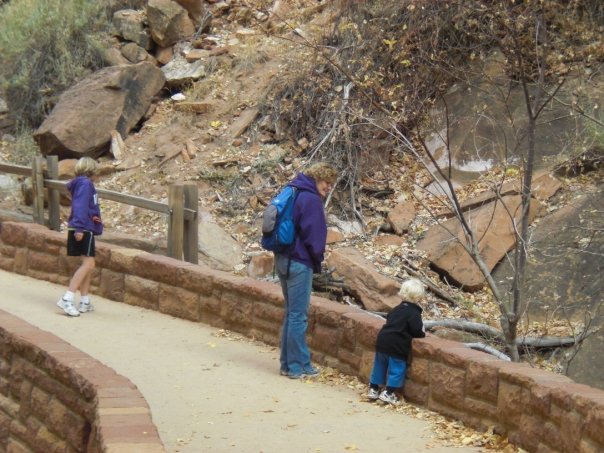 My children and I on an adventure at Zion National Park

The thing is that whether or not we’re allowed to make mistakes as parents doesn’t really matter – because we’re going to make them. Absolutely no one gets kids to adulthood without making some whoppers from time to time. It’s how we handle those mistakes – in both ourselves and others – that is the true test of a good parent – not a “perfect parent.”

Unfortunately, one of the ways in which this perfect-parent pressure emerges is in shaming other parents on social media. This is going on all the time of course, but it becomes way more apparent when something big and scary happens, as evidenced recently when a toddler managed to fall into the gorilla enclosure at the Cincinnati Zoo and another toddler was unexpectedly snatched by an alligator while wading at a Disney resort. The outpouring of hostility and venom directed at the parents of those children was breathtaking – and depressing – to behold. And the truly sad thing is that – nasty comments on Facebook notwithstanding – those parents could have been any of us.

Now I know a lot of parents out there are thinking, What? That could never happen to me! I’m far too cautious with my children! But I promise you that, or something very similar, could indeed happen to you, and I’ll prove it to you.

Have you ever, perhaps in the very first days of parenthood, done or said something that caused an old-timer to wince and say something like, “Never sleep with a baby in your bed! He’s more likely to die of SIDS”? You might have thought, Shows how much you know! Mothers who co-sleep have a heightened awareness of their babies.

If you were smart, though, you’d have checked out the data, and you’d find out – hopefully, in some way other than the hard one – that sometimes babies do die when in bed with their parents, even if they are not particularly heavy sleepers. I was at a SIDS conference once where I heard parents in one room lamenting  the fact that they had co-slept with their baby who’d died and then parents in another room saying they would never forgive themselves for letting their baby – who had also died – sleep in a crib. Much as we’d like to be able to take all the risk out of life – and the perceived wisdom on how to do that is constantly changing – it’s not possible. There are no guarantees.

Have you ever taken your toddler to the park or the beach and gotten distracted by another child or conversation and suddenly realized that you didn’t see your child anywhere? What happened then? You panicked, didn’t you? Your heart raced, your voice went up the scale in pitch, and you ran around recruiting people to help until you melted in a puddle of relief when your child was found safe and sound. Whether it was seconds or minutes that you didn’t know where your child was, your heart knew the truth, didn’t it?

Even if you consciously believe, That could never happen to me!, your heart knows better. It knows that sometimes all that separates a child from a disaster is 30 seconds of parental distraction. It knows that if you can’t see your child, something awful could be happening to your child.

If you can honestly say that this has never happened to you, I’m willing to bet that either you have never taken your child out in public or your child is not yet mobile enough to disappear – neither of which would qualify you for Parent of the Year, would it?

No parent can keep their eyes on their child all the time. It’s simply not possible. And children are unpredictable. In fact, half of all kids with autism “wander” – though many parents feel like “bolt” is a better word because it can happen scarily quickly – from a safe setting.

Have you ever thought your child whose “tummy hurts” was malingering because she had a test in school that day? Ever sent your child to school only to get that phone call, “Hi, Mrs. Yourchild’slastname, this is the school nurse at Local Elementary School. So-and-so is in my office. She threw up in the classroom, and I’ll need you to come pick her up”?

I’ve been there. And it feels like crap because you know what it means? It means that, no matter how good my motivation is, my judgment can be off sometimes. And that is a terrifying thought.

It’s not too big a deal when it’s a tummy bug, but what if it were something more subtle and chronic like frequent low-level bruising that I ignored, and it turned out my child had a serious illness? In today’s world, this one is happening all around us because of two things: 1) we are encouraged to ignore our intuition, and 2) our toxic world is making many of our children very, very sick in ways that even most doctors don’t easily recognize.

If none of us are perfect parents, why does it seem that so many people are compelled to pronounce so many other parents lousy?

Personally, I think it comes from the fact that no matter how sure those parents seem to be about their own parenting skills, the opposite is actually true. I think that deep inside they feel a deep insecurity, a suspicion that no amount of wonderful parenting can ever be truly good enough. No matter how well they are parenting, they are sure somewhere deep inside that they are screwing their kids up just as much or more than they themselves were screwed up, and that’s why they absolutely have to be perfect parents.

So, what parents are mostly revealing when they criticize others, especially viciously, is their own deep fear of the unknown, of not being able to control the outcome. Doesn’t it seem that nothing truly fazes the best parents? That’s because they have come face to face with the knowledge that they cannot control the outcome of their parenting, that the best they can do is provide their children with the tools to make the best decisions possible – and the resilience to pick themselves up and make a course correction when they make mistakes. Notice I said “when” not “if,” because if we are living a life worth living – and that’s what we all want for our children, isn’t it? – mistakes are an inevitable part of the process, and sometimes the biggest mistakes yield the biggest rewards.

So how do we go from being parents who are so uncomfortable with the unknown to parents who are deeply steeped in the knowledge that even the most horrible mistakes can be woven into beautiful lives? Like so many other things, it comes down to love. Love for the flawed and beautiful beings we are. Beings who trying our best to be great parents to our children, to provide them with the approbation and attention that we instinctively know children need from their parents, having been children ourselves once.

But we can’t truly give our children that which we are not generous enough to give ourselves. The cliché here is the flight attendant saying “Put your own mask on before you put on your child’s” in the case of an emergency. There’s a reason for that. If you don’t take care of your own needs – in this case for attention, approbation, approval, and just plain love – you won’t be able to take care of anyone else’s.

So today, thank yourself for all your parental efforts, even the ones you might be afraid are not up to the mark. Give yourself that appreciation and attention you so richly deserve by being a child of the universe – who has a right to be here – and no doubt it will come clear to you that the universe is unfolding as it should.

Then maybe you can thank someone else who needs it too. Of course, they usually won’t tell you so in so many words. In fact, their words might just look a lot like criticism of you . . .

In love and peace,

3 Responses to It Can Happen to You: Good Parents Make Mistakes – Sometimes Horrible Ones