Your Child NEEDS the HPV Vaccine: 13 Reasons Why the CDC Is Right

(We are reposting this piece by Dr. Margulis, because (a) it’s awesome and (b) our site can handle more traffic than hers.) 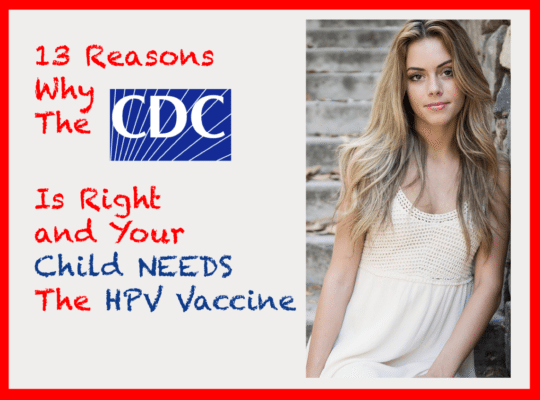 Does your child need the HPV vaccine to protect her against the human papillomavirus?

The Centers for Disease Control and Prevention say a resounding “Yes!”

Your child NEEDS the HPV/Gardasil vaccine.

Gardasil is recommended by the CDC for all children between the ages of 11 and 12 years old.

Your child will need two shots, given six to twelve months apart.

Human papillomavirus (HPV) is a group of over 150 viruses. Some types can cause genital warts. Others can lead to cervical and other kinds of cancer.

You don’t want your precious baby to get genital warts, do you?

You don’t want your kid to die from cancer, do you?

You’re not a heartless baby killer, after all. Or are you?

C’mon, this vaccine is a no-brainer. In fact, anyone who even considers telling a parent that there are pros and cons to the HPV vaccine is committing a “hanging offense,” to borrow a turn of phrase from the Boston Herald’s Rachelle Cohen. (We loved your editorial, by the way. Thumbs up, Rachelle!)

And, since we seem to be going into the business of hanging medical freedom and children’s health advocates, perhaps we ought also to hang any parents who choose to forgo the HPV vaccine?

And while, we’re at it, how about the children who say, “No, thank you,” to the HPV vaccine themselves? We could hang them too.

In case what you’ve already read is not enough to convince you that your child NEEDS the HPV vaccine RIGHT NOW WITH NO FURTHER DELAY, here are 13 more reasons the CDC is right and your child should get the Gardasil vaccine.

The Japanese government stopped giving the Gardasil vaccine in 2013 after health officials recorded nearly 2,000 adverse reactions, according to the Tokyo Times.

What do the Japanese know, anyway?

Ah, right. Japanese health authorities recognized that the whole-cell pertussis vaccine was causing brain damage in healthy children and introduced a safer and equally as effective vaccine in 1981, a full SIXTEEN YEARS before American health officials paid real attention and recommended an acellular vaccine for widespread use in the United States…

Shazel Zaman was so dizzy and had such a severe headache that she ended up in the hospital.

The thousands of parents who belong to this non-profit, the parents who followed their doctor’s orders and got the “cervical cancer jab,” as they like to call it in the U.K.? Whatever! They’re ALL full of baloney and making things up. Every single one of them. And so is every family interviewed for this article in The Independent…

They’ve got almost 15,500 followers on their Facebook page, thousands of whom are the parents of tweens and teens who have had severe side effects post-HPV vaccination, including joint and muscle pain, chronic headaches, and chronic fatigue. Ah, the luck of the Irish. They’re all full of baloney and making things up. Every single one of them. (See #4.) And who cares that the well known, well respected, definitely-not-a-hysteric Irish philanthropist Jonathan Irwin has just stepped down as the CEO of The Jack & Jill Children’s Foundation because of his daughter’s lack of mobility, back pain, headaches, nausea, and ill health since Gardasil vaccination (as he tweeted on May 3 and explains in this recent interview)?

Hmmm. There seems to be a global pattern here, of severe adverse reactions. Yeah, right. So what that hundreds of thousands of families around the world are experiencing the SAME PROBLEMS post HPV vaccination? We give MILLIONS OF DOSES of this vaccine. And all the families interviewed in this film? Probably full of baloney and making things up (see #3, #4, and #5). Because, of course, Danes are known for their dishonesty.

The MIT and Stanford educated medical doctor who also has a Master’s Degree in Public Health? The one who is a vaccine developer and has worked for Merck, the manufacturers of the Gardasil vaccine? Dr. Harper has repeatedly spoken out against the HPV vaccine and raised serious concerns about whether it is safe. As reported by CBS News in 2009:

Amid questions about the safety of the HPV vaccine Gardasil one of the lead researchers for the Merck drug is speaking out about its risks, benefits and aggressive marketing.

Dr. Diane Harper says young girls and their parents should receive more complete warnings before receiving the vaccine to prevent cervical cancer. Dr. Harper helped design and carry out the Phase II and Phase III safety and effectiveness studies to get Gardasil approved, and authored many of the published, scholarly papers about it. She has been a paid speaker and consultant to Merck. It’s highly unusual for a researcher to publicly criticize a medicine or vaccine she helped get approved.

Dr. Harper joins a number of consumer watchdogs, vaccine safety advocates, and parents who question the vaccine’s risk-versus-benefit profile. She says data available for Gardasil shows that it lasts five years; there is no data showing that it remains effective beyond five years.

[Our emphasis. Text highlighted in bold is the part you should ignore.]

Pap tests detect the presence of HPV. If pre-cancer HPV is detected, most kinds can be easily treated. According to the American Cancer Society:

A well-proven way to prevent cervical cancer is to have testing (screening) to find pre-cancers before they can turn into invasive cancer. The Pap test (or Pap smear) and the human papilloma virus (HPV) test are used for this. If a pre-cancer is found it can be treated, stopping cervical cancer before it really starts. Most invasive cervical cancers are found in women who have not had regular Pap tests.

Since your kid isn’t going to go for that preventative medicine and pap smear nonsense, you’ll be first in line at the doctor’s office to have her get the HPV vaccine.

HPV is a common virus, which nearly 80 million Americans carry in our bodies. Our bodies, incidentally, are full of microbes—bacteria and viruses that live in us and on us. These microbes play a crucial part in our health and our immunity, as scientists have recently uncovered. There’s more we don’t know about how we live in symbiosis with microbes. But you’ve never heard of the microbiome and you’re not keeping up with the current science. Germs will be germs. It’s never crossed your mind that there may be benefits to cohabitating with viruses and bacteria and that wiping out a virus we have co-evolved to live with may not actually be a good idea. Bring on the vaccine. (And the severe auto-immune reactions and primary ovarian failure that sometimes go along with it.)

Since you think it seems like a fabulicious idea to vaccinate against a virus over 80 million of us carry (see #9), who cares that HPV is also harmless in the vast majority of cases? Bring on the unnecessary vaccines! And let’s develop one for the common cold while we’re at it.

Turns out that HPV doesn’t cause cancer on its own, at least according to this international team of distinguished researchers …

“Persistent infection with oncogenic human papillomavirus (HPV) is necessary but not sufficient for the development of cervical cancer. The factors promoting persistence as well those triggering carcinogenic pathways are incompletely understood,” according to peer-reviewed science anyway.

And we know that at least 90 percent of HPV infections clear up by themselves and never cause any health concerns (see #10)? So OF COURSE we should vaccinate! Because vaccines are safe, effective, and oh so necessary. Always.

Chances are your doctor has not ever read a vaccine insert. Your doctor received almost no training on safety, efficacy, or necessity of vaccines in medical school. So your doctor does not know that the HPV vaccine contains, among other things, a known endocrine disruptor thought to cause bowel disease as well as infertility in some mammals—oopsie! (polysorbate 80); a known neurotoxin (aluminum); and a substance that is in pesticides and banned for food use by the FDA (sodium borate). So you called Merck to find out why a banned substance was being injected into our children and they referred you to their legal department. Which did not return your call. Ah well.

Your doctor has PROBABLY never looked up the ingredients in the HPV vaccine that your child needs, which are, according to the CDC: “vitamins, amino acids, mineral salts, carbohydrates, amorphous aluminum hydroxyphosphate sulfate, sodium chloride, L-histidine, polysorbate 80, sodium borate, yeast protein.”

But we can pretty much GUARANTEE that your doctor has gotten a free lunch, free swag, and perhaps even an all-expenses-paid trip from pharmaceutical representatives eager to sing the praises of their latest and greatest vaccines.

This is the messaging given to teens—“Just don’t tell your parents!” And you’re all for it. Because, of course, your youngsters should be making medical decisions about everything—vaccines, psychotropic drugs, birth control, abortion, antibiotics, ADHD medication—without telling you or talking to you first.

Because the HPV virus is very scary. She even showed them pictures.

After she instructed the freshmen not to tell their parents she realized—oh, my!—she had made a mistake.

So she added the words, “Just kidding.”

[*This nurse’s identity is well known in our community, but the aforementioned unidentified high school refused to release her name when baffled parents repeatedly asked for confirmation, choosing to refer to her only as “the speaker.” Because we live in a small town and this nurse’s behavior was inexcusable, even reprehensible, to so many people who live here, we have chosen not to print it here.]

She was representing AshlandChild. Note there is no name or contact information on AshlandChild’s website. This website poses as a site that is “supporting the immunization conversation.” Except the public health nurse in question actually told me that she has no interest in having a conversation with people who are “intractable” (translation: anyone who does not wholeheartedly agree with her. That is, with all of the CDC’s vaccine recommendations).

AshlandChild is interested in “supporting” one conversation, however. A monologue in an echo chamber. That monologue is how best to get every child to have every vaccine on the CDC schedule, regardless of that child’s genetic vulnerabilities, individualized medical needs, or risk of exposure to said infectious diseases. Because, as we have convincingly shown you by now, your child NEEDS the HPV vaccine.

The purpose of AshlandChild is to “remove barriers” to vaccination.

In the case of teenagers, the “barriers” that need to be removed? Thoughtful, well educated parents. Remove ’em or lynch ’em. Take your pick.

Screenshot from The Independent

This post is not designed to and does not provide medical advice, professional diagnosis, opinion, treatment, or services to you, your child, or to any other individual. General information is provided here for educational purposes only.

Are Vaccines Safe? To Vaccinate or Not? These 60 Experts Weigh In

Do Vaccines and Tylenol Cause Autism? One Family’s Story

Jennifer Margulis, Ph.D., is an award-winning journalist, Fulbright grantee, and a champion of children’s health. She is the author/editor of seven nonfiction books, including Your Baby, Your Way: Taking Charge of Your Pregnancy, Childbirth, and Parenting Decisions for a Happier, Healthier Family and (with Paul Thomas, M.D.) The Vaccine-Friendly Plan: Dr. Paul’s Safe and Effective Approach to Immunity and Health, From Pregnancy Through Your Child’s Teen Years. Her articles have been published in the New York Times, the Washington Post, and on the cover of Smithsonian magazine. She has taught literature in inner city Atlanta; appeared live on prime-time TV in France; and worked on a child survival campaign in West Africa. Learn more about her research on vaccines in Ty Bollinger’s mini-series, The Truth About Vaccines (you need to give your first name and email to sign up). Follow her on Facebook, Twitter, and Pinterest.

26 Responses to Your Child NEEDS the HPV Vaccine: 13 Reasons Why the CDC Is Right