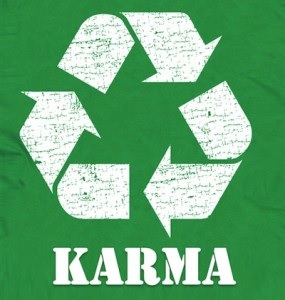 The reflection of a society’s views on mainstream issues concerning what is covered in various media forms is constantly at odds with entertainment. On the one hand, stories on television news and major publication’s websites detail the problem of bullying, both on the internet and in class rooms across the country. Yet turn the channel later on and scripted “reality” and talk shows portray a stereotypical episode with women , teens even studio audiences embracing the culture of bullying, fighting and trash talking for the audience’s viewing pleasure. The next day, advertisers are hoping we gather around the water cooler or more commonly, on our social media pages engaging in heated discussions where the melee continues. Everyone has opinions, and as a whole it seems people enjoy being judgmental and critical of others. It is accepted, encouraged and widely covered.

A prime example of this is the comment section at the end of a blog. Bloggers for the major purveyors of social commentary, political discourse and forward thinking will choose a topic that guarantees heated discussion, use a carefully chosen set of key words that are proven to draw page views and reposts, light the match and insert the boxing ring at the end for readers to go at it. Parents and anonymous commenters verbally spar for the pleasure of advertisers wishing to spend money to get products and services in front of a large captive audience. People affected negatively by the issue are left upset and worn out after a stranger has fought to establish their own superiority by name calling, character assassination and hate speech. When this is framed in the context of vaccines it is justified by the idea of the greater good for society. But it is more than that. Over time, posts and articles of this type have, through the nature of repetitiveness combined with the permanent nature of the internet, seeped in to our collective consciousness to crowd out any voices that do not support the official government stance of vaccine safety and necessity. While the more fervent the pitch of calls to strip parents of their rights, demand government vaccination mandates, and jail or sue those who do not choose to vaccinate their children for the perceived fear of endangering others festers, the question we need to ask is where does it end?

Today vaccines, tomorrow it is a medical condition such as mitochondrial disease or PANS/PANDAS that doctors are still inexperienced in because the numbers of cases on the rise are a relatively new phenomenon.The case of Justina Pelletier being taken from her parents and made a ward of the state after languishing in a psychiatric unit for a year because her mitochondrial disease was “all in her head” is a prime example of the slippery slope of parental rights when it comes to making medical decisions for their children. What happens when society makes it acceptable and unchallenged for social services to take away a child because they believe a family’s disagreement with a doctor constitutes medical child abuse? Can the act of not vaccinating your child be too far behind because the societal attitude has been established (by the media) that parents who make alternate choices well within their legal rights deserve to be punished for not conforming to norms mandated by those in authoritative roles?

It all starts with how the topic is discussed and manipulated through the power of words. It isn’t even what is being said, it is how emotionally charged the language framing it is, and how the reader responds for the world to see. As these tactics become accepted practices in shaping internet culture, so does the example we set for our children and anyone else watching that it is ok to bully someone to get what you want. If lives are destroyed in the process, as in the cases of teen suicide attributed to personal attacks in cyberspace, the perpetrators are sought out and brought to justice, often in a court of law. When a similar situation occurs concerning vaccines and autism, involving the psychological tactics used to control the disagreement of others it is known simply as “collateral damage”.

It is time to disengage from contributing to this situation.
As a thinking parent, I am interested in reading thoughtful, balanced reporting on a variety of subjects. I would appreciate it if writers would give me credit for the ability to analyze the information presented on both sides in order to make up my own mind. Presenting a blog as the last word on a subject based upon the writer’s professional credentials is misleading. Inciting others to attack anyone who does not unquestionably support an officially sanctioned action is tabloid journalism disguised as thoughtful discourse. No clicks , no site traffic, no money from advertisers = no performance based pay for bloggers. Websites can’t make advertising revenue if no one participates in this current blogosphere of “anything goes”. Spend your time instead having real discussions at water coolers and dinner tables everywhere with people you know about topics that matter. It is a much better use of your time instead of attempting to defend your beliefs to anonymous strangers.The media conglomerate with no personal stake other than profits is the only one that wins.

Karma – is a Member of Team TMR.  She is “just a mom” to four kids that spend way too much time navigating their dirty mini-van through the urban sprawl that is metro Atlanta. She proudly supports Generation Rescue in the role of parent mentor for their Family Grant program. When asked, “How do you do it?” the answer is simple:  coffee, Belgian ale, and an odd sense of humor.