Featured Guest Blog: They Said It Was Safe 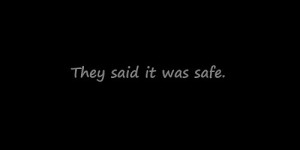 As parents, we are told to trust our government. If we become suspicious of those in positions of power, either due to education, negative experiences, or both, we are told we are wrong. Our government wouldn’t allow something that was harmful. Time and time again I have heard that phrase. But the facts just don’t hold up. Not in regards to our food, our medicine, our vaccines, or our water. When a closer look is taken to any of these issues, it becomes apparent that our government is, in fact, allowing us to be harmed.

I have three wonderful kids, a son and two daughters. My oldest daughter has a hearing disorder calling Auditory Processing Disorder along with some standard hearing loss. She had a sudden onset of hearing issues around the time that she received her MMR vaccine. We never put two and two together, and thanks to a practically worthless pediatrician, she didn’t even receive a referral for a proper hearing evaluation until much later. We told him time and time again that she wasn’t hearing properly, and she would not stop pulling on her ears. We were repeatedly told that she “spoke too well” to have a hearing disorder and that her constant ear pulling was a “bad habit”.

I actually had to loose my temper in the pediatrician’s office to get our records and get released from his practice, so that I could take my daughter to someone that would give her a hearing exam. They found that she did indeed have a hearing problem. We never suspected her vaccinations, even though the onset was at the same time.

In October of 2010, we took our youngest in for her vaccinations. We had no idea she was going to be given so many in one sitting. Within 15 minutes, her face turned blood red and swollen, she cried, she ran a high fever, she lost all of her speech, all of her ability to chew, and developed nearly every symptom of what would later be diagnosed as autism. She had not a single one of those symptoms prior to her vaccine reaction. Not one.

We’ve spent over three years fighting to recover what she lost that day. We didn’t take what I refer to as “The No Hope Road”. We kind of bucked the system and along with a great deal of research and prayer, we did what felt right to us. Slowly, but surely, our youngest is regaining many of her skills. She still cannot chew. She is still non-verbal. But she’s happy most of the time. She laughs. She plays. She interacts with us. She is “with us” again.

I have shared our journey openly with family, friends, and on my blog. I have done this because I write about my life, and this is a part of my life. But also because I want people to know this sort of thing does happen. I want people to know that there is hope, and that people who cannot speak, they still think and feel just like you and I, and they deserve to be treated as “typically” as possible.

I’m known for being bluntly honest, so anyone that knew me well, or knew our daughter “before”, never doubted what we said happened to her that day. But others did. When they did, their argument was always the same thing, “The government says it’s safe. The government wouldn’t allow it if it weren’t safe.” and time and time again, “The CDC says it is safe. The CDC says what happened to your little girl couldn’t have been caused by her vaccines, you are wrong.”

Sure. Because something that happens to your child right in front of your eyes, within a matter of minutes, must be something else. Surely she was “born that way”. Some would rather believe that. That is much easier to believe than to think of the horrific possibility that their child might be the next to fall. It’s much easier to believe that it was “fate”, something that was destined to be – something unstoppable… rather than to face the fact that our government may lie to us about the safety of our children.

I have several autoimmune issues, including Hashimoto’s Thyroiditis and an autoimmune neuromuscular disease called Myasthenia Gravis (MG). Nobody told me that my children’s family history of autoimmune diseases put them at a higher risk for vaccine reactions. There were many things we were never told. Many things that we deeply regret that we did not research for ourselves. My husband was a nurse, we didn’t think that our children would be damaged by their vaccinations, and we live in a state where there are zero parental rights for vaccine choice. The government mandates it and the government tells you it is safe and for better or worse, life goes on.

Then on January 9th, 2014 myself, my family, and over 300,000 residents in my area were poisoned. We live in the area of West Virginia that was impacted by the chemical leak into the Elk River. The leak occurred approx. a mile up river from the intake for WV American Water Company. So the chemicals were pumped throughout over 1,700 miles of pipeline and contaminated the water for over 300,000 residents.

They admittedly knew about this contamination hours before they alerted the public and issued a water usage ban. During this time we were all drinking the water, doing our dishes and laundry, etc. Many of us became ill, myself included. 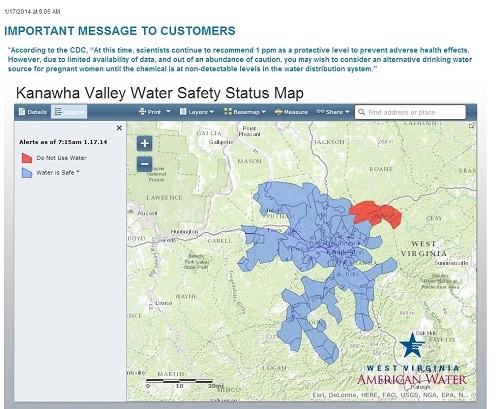 After several days, they started to lift the ban, zone by zone, until everyone was cleared to use their water again. They based all of this on one thing, a recommendation by the CDC. The CDC said that the water was now safe to use. They told us it would have an odor, but it was safe.

The U.S. Agency for Toxic Substances and Disease Registry (ATSDR) seemed to disagree with the recommendations put out by the CDC and WV American Water Co. when they suggested to officials that residents be told to run water from their homes until they no longer smelled the chemical odor, according to communications that were obtained under the West Virginia Freedom of Information Act. This recommendation was not followed. We were directed to perform a short flushing process and we were told that the water that then came out of our pipes would be safe, as per the CDC.

As people began using the “safe” water, many became ill. A woman died, another is hospitalized with kidney failure, and hundreds of others became ill enough to require treatment at area hospitals. Many residents shared photographs on social media of their rashes and chemical burns from showering in the “safe” water. I can only guess how many more, like myself and my family, became ill but did not seek medical attention. So many thousands of calls poured in to the local poison control hotline that they had to bring in National Guard volunteers to help man the phones. This was after the CDC said the water was safe.

Some areas are now starting to improve enough that people can use the water for washing, etc. At my home the fumes from the water are still too severe to use it for anything other than toilet flushing. Currently, my family has been over 24 days without usable running water from our tap. Thankfully, we are one of the “lucky ones” that had an old well on our property. So we have been able to supplement our bottled water purchases by carrying water from the well and boiling it. Meanwhile, the CDC still maintains this water is safe, even after all of the injuries (chemical burns, rashes, pneumonia from respiratory irritations, kidney damage, liver damage, diarrhea, vomiting, etc.).

When a resident contacts local officials or the water company about the water safety, they all fall back on the CDC’s statement. When residents contact the CDC, the CDC refuses to comment. They tell us to contact our local officials. It is in my opinion, the very definition of a runaround. Even our local health official says he and his family are not drinking the water that the CDC says is “safe”.

Just this week, we were told that the “safe” water does contain a known carcinogen.

And to the friends and acquaintances who doubted what happened to our little girl because, “the CDC said it was safe”, I hope they remembered that, as they turned on their CDC-approved tap water.

They said it was safe.

I hope what happened here in our beautiful state, serves as a warning to everyone. We need to protect the health of our environment and of our people. I hope you don’t forget West Virginia. I hope when you think of us here, without drinkable water coming from our tap, you remember the same CDC that told you those vaccines are safe, said the very same thing about our water.

Debbie Norman’s previous career was in environmental science. She worked in a laboratory that tested water, soil, and air to make sure that companies were within regulations. The chemical, pesticide and heavy metal exposure from her job, caused her immune system to malfunction and she became disabled. She is a wife and mother of three children, one with autism. She is the founder and director of Women with MG, an international support group for women with myasthenia gravis. She blogs regularly at DebbieNorman.com

14 Responses to Featured Guest Blog: They Said It Was Safe