Sometimes I feel like the odd man out when it comes to autism parents comparing notes. This is true for a lot of reasons that I won’t go into here but for the sake of brevity I’ll focus on feeling like the square peg when it comes to discussing how our different families spend our free time. Most families that I’m familiar with who have kids on the spectrum have issues with leaving the house; dread going out; don’t get to take their family to fun places – you know that drill. Our family is the “Opposite Autism Family.” My son has a version of autism that makes him want to GO, GO, GO!  Of course, as the saying goes “if you know one person with autism – you know one person with autism;” there really are no norms and I’m being tongue in cheek when I refer to autism “versions.” But I had not met many of our “types” before.  And maybe, just maybe, it’s not the autism pushing him to GO, GO, GO. It might just be that I have an adventurer on my hands. Or it may be my fault…

At barely 10 weeks old, we were taking him on a two-thousand-mile trek into the mountains of NM to see family. Yes, we were showing him off. And that kinda set the tone for the next few years. Pennsylvania, New York, New Mexico (again), Florida, Maine, New Hampshire, Virginia, DC, Maryland… we got around.

Extreme hypotonia left my son unable to sit until age two and a half and kept him from walking until three and a half years of age. His inability to move and explore his environment showed in his agitation and boredom – so we were always looking for an interesting event or adventure for him (translation: looking for a way to stop the screaming/crying/whining).

Aside from the traveling, keeping him entertained was sort of simple then: stores with sliding glass doors, escalators, elevators.  I swear my daughter is going to think that it is perfectly normal to entertain her children in the local hospital elevator for hours. “You mean you DIDN’T have ‘elevator time’ when you were little?” she will say to her mate.

Then trains were discovered.

Then trains going to other cities.

Other cities that had subway systems.

Then airports and airplanes.

Then “Mr. GOOGLE” – and the world was his oyster.

School breaks became marathons of endurance and movement. There was always a need to have several outings a day planned. Now, I understand that a lot of this was likely due to the boredom of a child that did not have playskills to utilize the three MILLION toys in this household. I also counted my lucky stars that he was interested in the world and curious. So – we went. Why was my house a wreck all the time, people might have wondered. Well, if I wasn’t caring for kids, squeezing in some paying work when I could, I was riding a train or elevator or subway or bus. It was way more important than a clean toilet or a cable bill being paid on time. 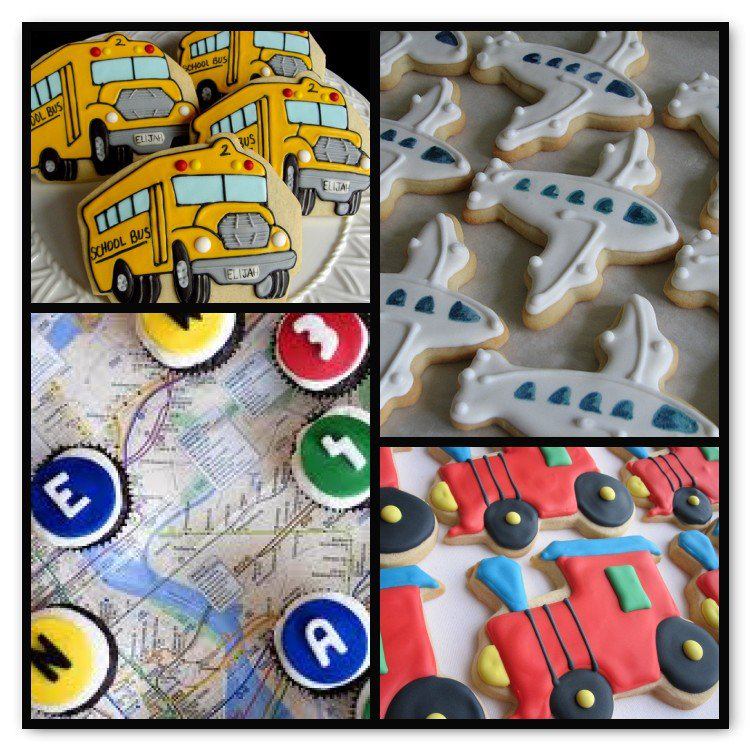 In honor of Sugar Cookie Day – Here is a collage of my favorite modes of transportation – done in cookie.
“Focus on the journey, not the destination. Joy is found not in finishing an activity but in doing it.” ~ Greg Anderson – greganderson.org

Not to say every outing was smooth. There are always the logistics of moving a gross-motor-challenged child and his baby sister around big cities. He loved subways – but they don’t always love him — lots of stairs, broken elevators, non-accessible train cars. There was a lot of sweat and swearing that went into some of those trips. Oh yeah, and the time the car rental shuttle drove away with our pre-verbal, non-walking son in it, while hubby and I struggled to get a mammoth stroller into the bus (Did the driver NOT see us?). Our super-human strengths of booming voices, pounding fists and flying feet caught everyone’s attention and we were quickly reunited – but the scars of that one remain.

For a period of time, even ‘adventures’ did not soothe my son’s tortured body and spirit. During one of these more difficult periods, my son was unhappy with all the decisions we made about the outings – from the choice of subway lines, to the landmarks visited, to the snacks consumed. But he was unable to tell us what he would like, either because he couldn’t decide or we couldn’t understand his words.  There were more than a handful of prolonged tantrums – including head banging – that elicited stares from concerned security guards. None of them ever offered help or asked my son if he was being hurt or even patted us down for stolen goods. Those were the eggshell years – and I’m happy to see the door hit them in the ass.

Later, as his reading and computer skills improved – he started finding places he wanted to go. Then he started planning the routes by which to get there. Not just the roads – but the mode of transportation.  I know the schedules of most of the regional bus lines, Amtrak trains and long-distance commuter rails. We have embraced the mantra of “we are all about the journey, not the destination (although a cool destination will definitely rock it).”

Last summer we took a local trip that he completely planned. He picked the attractions: a restaurant he wanted to visit, a hotel he wanted to stay at, and the modes (plural) of transportation. It was a milestone. He could communicate his needs in a calm manner. He could make a decision.

This summer our family is quietly celebrating a new milestone. Staying home. Putting up a tiny kiddie pool and our old preschool slide to create a makeshift “water slide”. Investing in a trio of “slip and slides” to swap out depending on our mood. Learning to play ping pong on a fabulous homemade table. Playing Wii games for hours (yes, we celebrate this because we get to be HOME). It’s not all rainbows and unicorns, but perhaps the storm is letting up a bit and shortly the sun will peek out.

I’m not sure where that unicorn will come from – but I’m willing to hold out hope.

This entry was posted in Back To School Special, Blogs by Thinking Moms' Revolution, Get Inspired, LuvBug TMR. Bookmark the permalink.