Did you know that February is North American Inclusion Month? Nope? Me neither. I had no idea, and I don’t know how I missed it.

We hear a lot more about Autism Awareness Month in April because there is a bigger budget behind it due to all the funds raised for that effort over the years. When my kids were two and Autism Speaks was heavily promoted, I was so hopeful that people would learn about autism, know what it looked like, and learn to be accepting—or at least tolerant. Autism Speaks certainly held plenty of Autism Walks where families raised funds for this purpose, but that money raised was rarely used to help those in need directly. As a parent of three children with autism, I am not confident that money was well spent.

North American Inclusion Month (NAIM) was created by the Yachad/National Jewish Council for Disabilities. Now some five years old, the North American Inclusion Month was established as a way of recognising the need for more opportunities for people with disabilities, including in both employment and education. February 2nd, 2010 saw a U.S. House of Representatives resolution, which acknowledged the goals of NAIM.

NAIM is an opportunity for society to be more inclusive regarding people with disabilities. Regardless of an individual’s disabilities the North American Inclusion Month aims to make them feel every bit a part of society as an able-bodied person. The month is not in place to create a better understanding of a disabled person’s needs and aspirations for just four weeks. The North American Inclusion Month is used as a way of galvanising a more positive approach, concerning people with disabilities, for the whole year.

Until 2019, my family lived in a modest suburb 15 minutes from downtown Atlanta, where I commuted an average of four hours per day, five days per week for services that my severely affected twins could not access near our home or at our local school district, despite numerous meetings with legal counsel present.

Spring of 2019 we relocated to a large swim-and-tennis community that was the polar opposite of where my kids had spent most of their childhood, isolated in a fenced yard with no neighborhood children to play with. Our new community had a pool! Excitedly, we waited for opening day, our first attempt at belonging to a community. For the first time my children would be able to swim without my driving to an indoor pool that was so chlorinated it made my daughter’s nose bleed so badly we never went back.

Between May and September, we experienced a lot of disappointing interactions. My identical twin boys have always attracted attention. When they were small, their behaviors were mostly tolerated. This past summer, our first at the pool, they were 13 years old. One boy makes what we refer to as a pterodactyl noise: He flaps, screeches, gallops, and will get too close to others. Unfortunately, he loves small children and babies, which means we must be constantly vigilant around young children. His slightly smaller, more involved brother is not terribly interested in other people but has discovered the goggles-enabled sensory wonderland that is underwater. He will swim right up to anyone so he can hear what it sounds like.

My boys just want to be acknowledged and included. They can barely say hi. They are socially awkward to the point of not being a threat, but I can imagine what a parent who doesn’t know us sees. Despite almost four years of full-time behavioral therapy and social skills and many years in a self-contained classroom, they may still make your child feel anxious or threatened. Every time we get out of the car, even though I am not sure how much they understand, I tell them that they are not to get too close to small children, not to get in people’s space, and not to be loud. I don’t want them to feel as though they are being punished by keeping them home and never providing opportunities to participate in regular activities like any family, but the minute we sit down, I have high anxiety, anticipating the judgment of others. 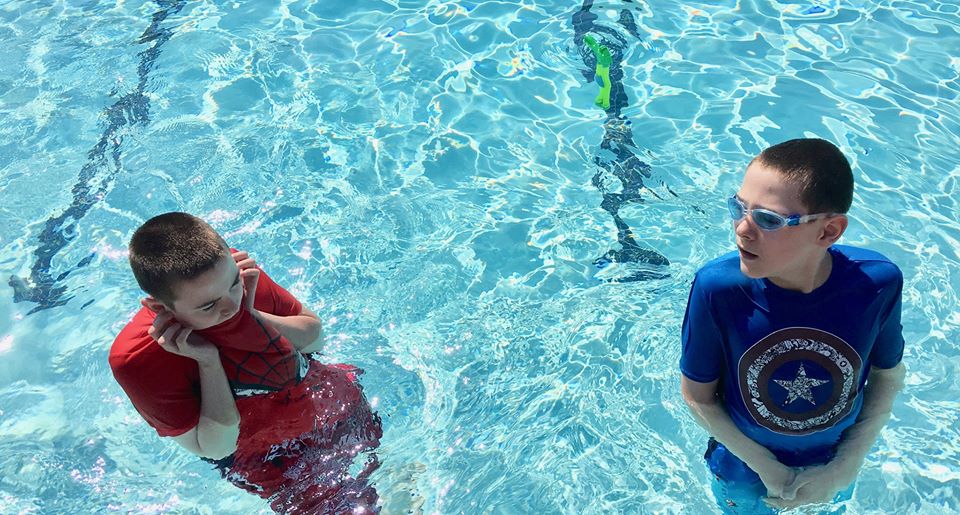 I can never relax; I am always watching them from the side. Why am I not in the water? Honestly I need a break, too, sometimes from being a full-time caregiver. I also don’t want to hover all the time as they are now teens. I would like them to have the space to have a small amount of independence where mom isn’t constantly right there.

The pool is well attended, and early in the day there were babies, preschoolers, and elementary-school kids. Parents would hang out in chairs, enjoying social time, beverages, and watching their kids play. At first we would go, and some parents would be kind and say hello. Some would encourage their young kids to say “hi” to the boys and would be very sweet to me when I would intervene if I thought they were being annoying or invading their space. Truthfully, these experiences were rare. Even when a kid says hello, they don’t get much payoff other than a squeal, and they eventually give up when the boys do not play with them or understand what they are talking about.

One mother saw my son flapping in front of her seven-year-old and started screaming at him that he was a bully (he was simply excited). I had to run over and intervene, telling her that he was not trying to hurt her son. She immediately apologized and backed down. I was not angry; I wanted her to know not to fear my children.

I don’t tell other parents how to raise their children, and I kept my mouth shut when I really wished parents would say something to their kids, kids who would scream when they saw mine, pretending (in a loud voice) that my kids were monsters and running away from them. This monster game would last the whole time we were at the pool. One teen would follow my son around and splash him as hard as he could in the face. In all of these situations, I would wait for the parents to see what was happening and say something to their kids, but it never happened. Yet, I am sure those same parents would have noticed if I had stepped in to stop it. He eventually felt me staring him down and stopped.

After watching such interactions all summer, I did speak up. When some eight-year-old boys were very rude to my sons who did not understand, I said, “Hey, if you have any questions about the boys you can ask me. It’s okay.”

This completely shocked them, and one of the boys said, “They scare me, they are loud.” Well maybe at first that was true, but he and his friend began chasing him around and making fun of him after a couple of hours.

I briefly told him that my son was nonverbal and because he couldn’t speak he used behavior to get attention, so the best thing he could do was to say hello and then ignore him. I think they listened to me as I wasn’t being mean, just honest with them.

By the end of the season we started going to the pool in the evening to avoid the stress of being around young children.

Look, I get it. I want to be just like everyone else, sitting in a chair, taking a breath while my kids get to be kids for a couple hours. But my kids don’t get a free pass just because they have multiple disabilities, and I must stay vigilant. If you are in their presence for five minutes, you know this without me having to spell it out. I know parents don’t want to police their children’s behavior, but it breaks my heart to watch younger kids call mine monsters while their parents sit by and say nothing.

The scene at our neighborhood pool quickly made it clear to me that kids aged 6-10 are not aware of how their actions affect others. I started to understand that elementary-school inclusion was doing nothing to promote or reinforce understanding of children with disabilities. This is disturbing because most likely my boys will be at their neighborhood high school until they turn 21. That means that the young kids they see at the pool now will likely go to high school with them one day.

In our old neighborhood we commuted two hours per day to charter schools, schools which defined inclusion as disabled students having electives (art, languages) and lunch with typical peers. When I asked in our meetings if there was any facilitation of typical peers interacting with my children in these settings, I was told that teachers couldn’t force the other children to interact. “Inclusion,” therefore, was merely a label meaning my special-needs children were allowed to be in the same space as other children, but no one would encourage interaction beyond that. In behavioral therapy, the majority of the children were at the same level of severity as my own, so practicing social skills there would not even approach what could be learned from exposure to school-aged peers in an integrated classroom. We had IEP goals every year from age three (over 10 years now) intended to develop communication and participation skills, and none of it seemed to make a dent.

In our new school we found a silver lining. They have a program called “Friends Club” where typical peers interact with the students in the self-contained classroom. Everyone has a cool T-shirt, and they learn from each other. Now, a teen will occasionally stop us in public to say “Hi!” to the boys. Our neighbor across the street is in the club and says hello every morning. This means so much to me because we are not used to them being acknowledged in a positive way. 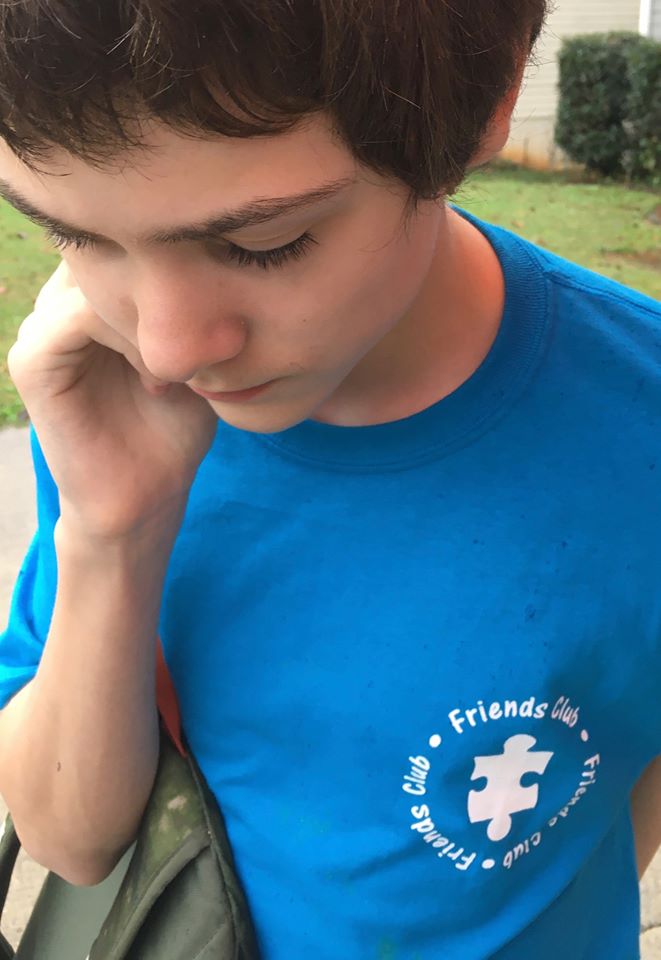 My son in his “Friends Club” T-shirt

During inclusion month, I would like to stress how important these school programs are. These student clubs will help teens discover that they can care for others, make a friend that really needs one, and possibly find a career someday. I can vouch for the fact that there will always be a job in an autism-related field based on the sheer numbers of children that aren’t just “quirky” but will need full-time care for the rest of their lives.

Parents, I don’t want to be the one to educate your child on how to treat others; I doubt you would appreciate that. Maybe you’ve told them before, maybe they encounter special needs kids at school and they’re still cruel. But just as you expect me to step in when my kids are invading your space and behaving oddly, I would appreciate your help when your children are treating mine badly.

I respect your family’s personal space, and I don’t expect your child to be friends with mine if they don’t want to. But children’s attitudes toward those with disabilities are shaped while they are young. I don’t want to be the scary lady who reprimands them at the pool because of my awkward teen boys. But, please, I am not sure my heart can take another summer of my children being called monsters by yours.

All of our children, typical or not, hear everything and understand more than you realize—and so do I. If you see me and ever have questions about our family I hope you will ask.

And to those who understood the importance of being kind to everyone, we appreciate it more than you can know.

This entry was posted in Karma TMR and tagged autism, inclusion, kindness. Bookmark the permalink.