Lessons of The Spring

Growing up I read about Rachel Carson – the woman who spurred an entire environmental movement by authoring Silent Spring which was her fourth novel as a naturalist and marine biologist. “How cool that a woman did such a powerful thing,” I thought. As my life churned forward, I was drawn toward a career path that would ‘make a difference’ in world – much different than how I had set out when I was forced to choose a major in college. Not unreasonably, the mate I chose in life was on a path that improved the planet as well. I wouldn’t say we are tree huggers – I’ve been known to toss an empty cardboard spaghetti box in the trash when I’m tired – but our every day lives revolve around knowing some hefty world issues and working within the system to make a difference.

So when our first child was born, we picked a name that would impart some of that burden onto him. He received a healthy dose of family names, but his given name was to be Carson.

This was the party favor at his baby shower: 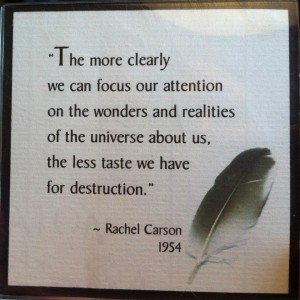 Little did I know the irony of the name bestowed upon him.

Over the years, I learned more about Rachel Carson. Her writing was her way of informing more people about the beauty of something she loved – the sea. The 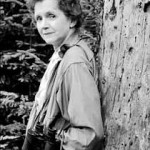 more they knew about the beauty and the inner workings of the ocean the more, she reasoned, they would be willing to protect it. Keep it from harm. Because she wrote for the U.S. Government, she was aware of programs and research being undertaken. Although the use of chemicals and the increasing understanding that chemicals were carcinogens was becoming more of an interest to her and her research, it was the 1957 “Fire Ant Eradication” programs which utilized widespread aerial spraying of DDT that drove her to begin “Silent Spring” – or the ‘poison book’ as she called it.

She is credited with the discontinuation of use of DDT in the U.S. (which is still shipped to other countries)

She was, and still is, smeared as a near-do-well and baby killer because malaria has run rampant due to the DDT ban (which it has never been banned for anti-malaria use – only for agricultural use)

And because Carson understood that the government was likely the wolf guarding the hen house, so to speak, she didn’t call for sweeping federal regulation. She advocated for grass-roots movements that form non-government agencies in what she called “citizen’s brigades”.

Is any of this beginning to sound familiar? Anyone? 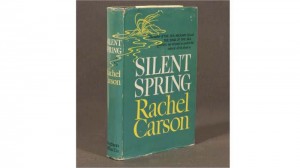 But one of the most interesting pieces of the Rachel Carson story to me was the fact that this book she wrote is considered a seminal point for a movement. A book. Her book. Silent Spring is largely considered a jumping off point for the environmental movement. Of course, if the stage had not been already set, the pump had not been primed – – this book would have fallen on deaf ears, and that would have been that. The release of Silent Spring not only spurred a grass roots uprising for the environment, it also gelled an orchestrated response by the chemical industry. A response that could be seen and measured – and has been documented.

This counter response has become routinized in almost all controversies since that time: smoking, abortion, GMOs, global warming… Maybe it’s called “spin” or “damage control” or maybe just “education”. Large corporations have endless amounts of money to “educate” the masses about how safe, necessary, tested, trusted or whatever their products are. They are building “supporters” for their product. It’s called factionalization. Definition: the act of creating group of people, especially within a political organization, who express a shared belief or opinion different from people who are not part of the group.

As we become more factionalized – we become impotent.

Could a BOOK actually spur that much change in policy/attitude/markets today? Never. Well, never say never – but I doubt it.

Look at autism. Even within 71 million people in the US are under the age of 18. Of those let’s say we apply the 1 in 88 occurrence of autism to that 71 million. That is 781,000 people UNDER 18 with autism. Multiply that by 4 because most people with autism have a mum, pop, sibling, grandparent (or four), aunts, uncles and friends. BAM! You’ve got 3.1 million people living with autism everyday.  That doesn’t even include teachers, administrators, service providers and local/state/federal officials. Yet, we cannot galvanize a movement because the community has become so factionalized by the titles/treatments/therapies/egos/diagnoses within it. Maybe – 50 years later after Silent Spring was published – *that* is the lesson we can take away from it.

3 Responses to Lessons of The Spring