So I have always been something of a people pleaser my entire life. Being raised in a small central-Illinois town, I learned early on that it was “easier” to fly below the radar and not cause any waves. I could not stand the thought of not being liked, so I tried to make sure it never happened. I was Miss Congeniality in a pageant at 17 years old. If that doesn’t speak volumes, I don’t know what does. 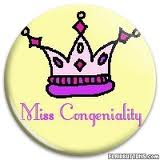 With this “Thank you sir, may I have another?” type attitude, it’s no surprise that I followed the advertising and sales career path after college. That word “career” sounds so strange to say now . . . I vaguely remember what that’s like. As many of you ladies out there already know, there’s not much time to have a career with the autism. Employers tend to frown upon having to leave work for the umpteenth time because your child’s school has no idea how to help your child who is screaming in pain, or calling in sick because your child was up all night and decided that 6:00 a.m. was a good time to fall asleep. Anyway, the entire idea behind the advertising and sales gig is telling people what they want to hear and wrapping concepts and ideas up in a pretty package and delivering it with a smile.

When Lily was diagnosed with autism at 25 months old in 2005, I really tried to continue my congenial ways and spin the situation. I’d been doing it for years; how hard could it be? Well . . . turns out, it’s pretty damn hard to do when autism has pretty much destroyed everything in its wake and turned our daughter into a person we didn’t even recognize. I can remember the therapies: watching in horror as my daughter would not respond to basic requests, not look anyone in the eye, and scream for hours. And. I. Mean. Hours. I would tell myself over and over, “It’s all going to be okay, right?” “It really isn’t that bad?” Trying to get some kind of affirmation from each and every therapist that Lily was going to be okay. And I specifically remember the looks of pity I would see in their eyes. Even though it was apparent that she was severely affected by the autism, I would tell myself that it could be worse. This isn’t so bad: the screaming, the crying, the self-injurous behavior. You see, I just couldn’t go there and admit to myself that accepting autism wasn’t an option for me deep down. If I dealt with the fact that I didn’t accept autism, that meant that I must not love and accept my daughter, right? Yeah. De-Nile ain’t just a river in Egypt and I spent a lot of time sailing on it.

Right before Lily turned three, something happened that shook me and our entire family to the core. “What happened?” you ask. Well that is another discussion for another time. Let’s just say that it brought me and our entire family to our knees. I realized then and there that, although I loved my daughter more than anything in this world, I HATED autism. With every fiber of my being, I knew as her mother that autism wasn’t a part of who she was. It had turned her into a shell of herself and had taken away her ability to enjoy even the simplest pleasures in life. And what it had done to our family dynamic, well, we are still trying to put the pieces of that puzzle back together after all these years. Lily deserved a better quality of life, and we were going to make sure she got just that.

Soon after that event, I went through what I can only call a severe grieving stage and mourning period, realizing that I couldn’t go on pretending that everything was all going to be okay. After hours and hours and hours of research, I was learning the reality of what had happened to her at the hands of a medical community that I blindly trusted with her health. They failed miserably. Yep. You don’t come out from the other side of that type of realization as the same person. The weight of the truth you discover will either crush you, drive you further into denial, or drive you to fight.

I chose to fight. I mean look at this girl. Does she deserve any less? 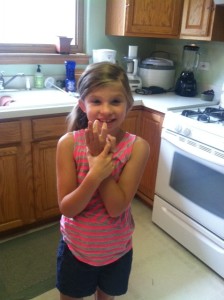 I look at the person I was before autism, and I really don’t even recognize her today. I love that I’m not that congenial soft-spoken girl anymore, although I think my husband wishes she would make an appearance once in a while. He and Lily’s amazing warrior siblings, Braden (12) and Keegan (1), have been fighting right alongside through numerous biomedical protocols and therapies over the years. I know that I made the right decision by choosing to fight for the life Lily deserves. She is a much happier and healthier girl now compared to the little girl that was in chronic pain at the beginning of her journey. Has it been easy? Hell no. I would love to say she has lost her autism diagnosis. We aren’t there yet. Financial struggles, work, a new baby — just life in general — have distracted us and taken our eye off the prize from time to time.

Over the past six months, Lily has made tremendous strides in communication and academics and this progress has given me a glimpse of the real Lily. Recovery is real, and it will happen. I am more determined than ever that she will have the chance to make her first best friend and have her first crush. We will not stop until she has the opportunity to reach her full potential. I’m her mother. If I’m not leading this charge for her healing, who will?

So, to sum it up, I do not embrace or celebrate autism. I choose to celebrate my daughter and the beautiful person she is now and the amazing young lady she will become. If this is something that you can’t accept, well, to the left . . .

“Christina (Queen B) is an autism advocate, wife and mom striving for the best balance while raising 2 amazing boys and one beautiful 10 year old daughter with regressive autism. She will never give up in achieving better health and healing for her daughter. “

15 Responses to Miss Congeniality, No More