I keep thinking I’ll write about something other than vaccines because, believe it or not, I am interested in many other health-related topics that I’d love to share with you. But then the propaganda machine cranks up to promote some new (or, in this case, old) outrageous law, story, or video . . . aaaaand I’m right back where I started. Sometimes I feel like Al Pacino in The Godfather: Part III, “Just when I thought I was out, they pull me back in!”

As many of you know, an old – I won’t even grace it with the word article – smear piece from Hollywood Life on Jenny McCarthy has been recirculating since her appearance on network television on New Year’s Eve. I find it ridiculous, and more than a little frustrating, that that particular piece is being posted as if there’s any validity to it at all, but I find it positively baffling when it’s posted by people who should know better – people like the director of the American Health Journalists Association and senior reporter at ProPublica, Charles Ornstein.

I won’t waste my time and effort on most folks who post this sort of thing because it’s just not worth it, but Mr. Ornstein has a history of calling out hospital abuse, and ProPublica’s stated objectives are things I can really get behind. So I thought this time it just might be worth it to try and reach him. I know that many of us are feeling a similar frustration, so I thought I would post my response to Mr. Ornstein as an open invitation to all journalists to live up to their calling.

I love the picture on your Facebook cover declaring ProPublica as a non-profit newsroom that produces investigative journalism in the public interest and then goes on to claim that “our reporting uncovers exploitation of the weak by the strong and how some in power betray the trust placed in them.” I applaud these ideals as they are not much in evidence in the world of journalism today.

Imagine my disappointment, then, to find that you have posted on your page a three-year-old [it’s actually much closer to four] opinion piece from Hollywood Life, no less, that alleges “After years of speaking out about her son’s autism — and against childhood immunizations — Jenny McCarthy is reversing her position.” As a journalist with integrity, I am sure you would be disturbed to know that the only thing this claim is based upon is a Time article wherein a medical professional who never even met, much less evaluated, McCarthy’s son, Evan, claims that he did not have autism. How irresponsible is it to assume that this man knows what’s going on with a child he never met, while the doctors who actually did evaluate him were completely mistaken? In addition, no journalist worth their salt would then go on to assume that this man’s pronouncement means anything to McCarthy herself.

On the contrary, since this piece of journalistic garbage is making the rounds again, McCarthy recently commented: “Stories circulating online, claiming that I said my son Evan may not have autism after all, are blatantly inaccurate and completely ridiculous. Evan was diagnosed with autism by the Autism Evaluation Clinic at the UCLA Neuropsychiatric Hospital and was confirmed by the State of California (through their Regional Center). The implication that I have changed my position, that my child was not initially diagnosed with autism (and instead may suffer from Landau-Kleffner Syndrome), is both irresponsible and inaccurate. These stories cite a ‘new’ Time Magazine interview with me, which was actually published in 2010, that never contained any such statements by me.”

The worst thing about reputable journalists posting pieces written merely to discredit Jenny McCarthy, though, is that it implies that the vaccine debate boils down to one celebrity’s opinion. That is a gross misunderstanding of the issues involved. Many people who post such drivel are aware that it is a gross misunderstanding, but they post it cynically anyway, hoping to paint parents who choose not to vaccinate as brainwashed by a Playboy bunny. What a fabulous way to discredit reasonable concerns!

Only it’s not true. Not even a little bit. No one chooses not to vaccinate, or vaccinate selectively, “because Jenny McCarthy said so.” Jenny McCarthy is one parent telling the truth about what happened to her child. (And, really, what possible motive could she have for lying about it?) There are thousands of other parents telling similar stories about what happened to their children, many of whom are ridiculed over and over again by people who have never for a second imagined for themselves what it’s like to watch your healthy child lose the ability to speak, interact socially, and/or use a potty, while at the same time developing horrible gastrointestinal problems, seizure disorders and mitochondrial dysfunction all after a round of vaccines, mostly for illnesses that your child was unlikely to ever encounter.

I’ve heard all the rationalizations: 1) Parents want someone to blame. Every parent I know whose child was vaccine injured (and I know many) blames themselves more than anyone or anything, because they allowed their child to be vaccinated without investigating the risks. 2) The signs were always there, the parents just didn’t notice. You’re a parent. Do you really think this is likely? Thousands of parents just weren’t paying attention to their infant or toddler? That sudden change they noticed at 1 year, 15 months, 18 months, or 2 years didn’t really happen? We’re supposed to believe that doctors who have seen these children for 1-2 hours over the course of their infancy and toddlerhood knew those children better than the parents who lived with them, many of them 24 hours a day? As a journalist and a parent, how likely do you really think that is? It’s not likely, so the last rationalization is 3) “That’s just how autism is”: Symptoms show up at 1-2 years and any correlation with the timing of vaccination is “coincidence.” I don’t know how old you are, but I am about to turn 53. I grew up in the ’60s. My mother had 8 children, her mother had 13. I had uncles, aunts, cousins, etc. galore. No one worried about their children regressing as toddlers. [That bears repeating:  No one.] If it happened, it was so rare that it was never discussed.

Contrast that with today: two percent of all the children in this country are diagnosed with an autism spectrum disorder. An additional 10% or so have ADHD — and no matter how many articles you read about the “overdiagnosis” of ADHD, the increase is real. Ask any teacher who has been teaching for multiple decades. He or she will tell you that today’s children are much sicker than any children they have seen before.

Investigate the history of vaccination in this country (pay particular attention to the National Childhood Vaccine Injury Act of 1986). Ask yourself why all newborns (who are too young to mount an effective immune response) are given a vaccine for a not-particularly-common sexually transmitted disease, when it is well known that a significant percentage of them will have life-threatening adverse reactions (as a matter of fact, nine newborns just died in China from a “hot lot”), and there is currently no way to determine who those children will be; and why nine-year-old boys should have a vaccine that the best-case scenarios say might save the lives of 1200 women over 60 years of vaccinating (while approximately 4,000 per year die of cervical cancer), but has already killed a number of otherwise healthy young girls and permanently disabled others. When you really investigate United States vaccine policy, it’s pretty clear that it has gone off the rails, that there is significant evidence for the “exploitation of the weak by the strong” and “how some in power [have] betray[ed] the trust placed in them.”

I went to Williams College, class of ’83, on a Tyng scholarship, where I graduated in three years with a degree in Physics. When I left, I received 800s on both the math and logic portions of the GRE. I know when something has been demonstrated or proven and when it hasn’t. Trust me when I say that going beyond the mainstream representation of vaccination practice will be very worth your investigatory hours, if only for the sake of your own children.

If you have made it all the way to the end of this, then I thank you for your attention, and I wish you a great deal of luck in your future journalistic endeavors. The world needs more journalists dedicated to reporting the truth, especially when it involves “exploitation of the weak by the strong.”

Mr. Ornstein posted an update.  He has not removed the original post, but he now “regrets” posting it. 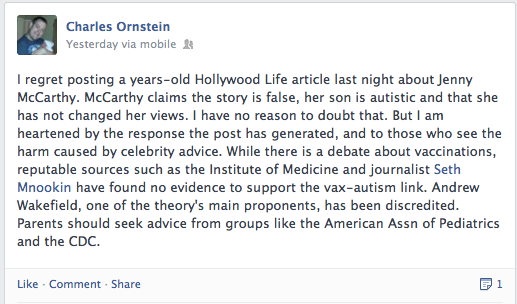 (Ornstein and I have a somewhat different definition of what constitutes a “reputable source” when it comes to certain subjects.  Marie “we are not ever going to come down that it [autism] is a true side effect” McCormick, chair of the Immunization Safety Review Committee of the Institute of Medicine, and Seth Mnookin, a former drug addict with a history of breaking and entering, wouldn’t be my standard-bearers for “reputable.” They have “found” no evidence of the “vax-autism link” because it is in their best interests not to do so, not because there isn’t one.)

In a personal response to my letter, Ornstein said he agreed that “the discussion of vaccinations should go well beyond Jenny McCarthy” and that parents need accurate information, but he would not personally be investigating the vaccine program.

I wrote back to say while I understand his reluctance to investigate the topic himself  –  those who do tend to be severely punished for having the audacity to question the powers that be – I am disappointed. If journalists like him refuse to take on the subject, how likely is it that the general public will get accurate information from the mainstream media?

No better opportunity exists for the “strong” to exploit the “weak” than the current United States vaccine program. It’s fulfilled by an industry that generates tens of billions of dollars annually in revenue, mandated and “regulated” by government agencies staffed by folks with clear conflicts of interest due to corporate pharmaceutical ties, and when innocent children fall sick and/or die no one is held accountable. If investigative journalists are not willing to really investigate it, who will?

*sigh*  Looks like I’m not “getting out” any time soon.