ACTION ALERT: Call the Members of the Senate HELP Committee

The Thinking Moms’ Revolution, as part of the Autism Policy Reform Coalition (APRC), recently asked you for help.

You called members of the House Health Subcommittee and asked them to support the addition of the APRC amendments to the Autism CARES Reauthorization. The amendments constitute only a small part of the our legislative agenda, but it’s a part that could make some real change.

THANK YOU FOR YOUR CALLS!

The bad news is that the House did not pass the bill with our amendments as is.

The good news is that they took language from both amendments and made one new amendment, the Doyle amendment, that includes the following language:

Such research shall investigate the causes (including possible environmental causes), diagnosis or ruling out, early and ongoing detection, prevention, services across the lifespan, supports, intervention, and treatment of autism spectrum disorder, including dissemination and implementation of clinical care, supports, interventions, and treatments.

APRC has lobbied extensively for the past six years to get explicit references to environmental causes and the development and dissemination of clinical care guidelines in federal autism law. While not everything we asked for, the Doyle amendment combines the spirit and intent of the two APRC policy requests into one amendment, and in some ways strengthens them.

APRC recommended that the National Institutes of Health (NIH) be required to follow the Interagency Autism Coordinating Committee (IACC) strategic plan, primarily because NIH has largely ignored the environmental causation part of the plan since the IACC’s inception. The Doyle amendment circumvents the possibility that the IACC could sabotage that part of the plan if they knew it were going to be actually followed by explicitly spelling out NIH’s responsibilities in statutory law.

In addition, the Doyle amendment requires NIH (rather than HRSA, as we requested) develop and disseminate standards of treatment and prevention to the medical community. This, too, is better than what we asked for because both the research on environmental causes and prevention and the disseminated standards will come from one agency. If HRSA were to formulate standards without reference to the causation-based treatment research at the NIH, it would be easier to adhere to the outdated idea of psychiatric treatment as the standard of care for autistic individuals with clinical symptoms.

The Senate HELP Committee will be considering the bill next.

We want them to pass our version.

Please call the following people and ask them to support the House version of the bill with the inclusion of the Doyle amendment. 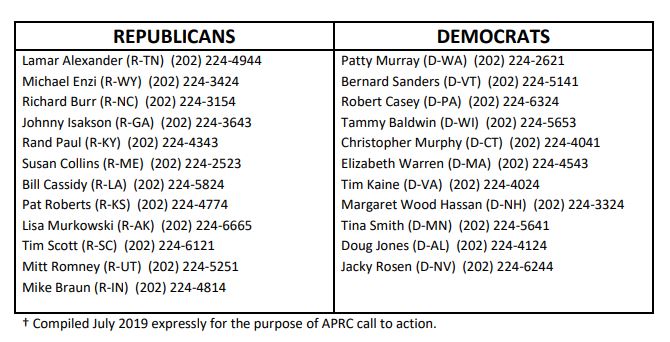