Anaphylactic Food Allergy Is NOT Normal

A Facebook friend posted this as her status last week. Many people don’t understand the severity or seriousness of life-threatening food allergy in today’s children because it is unlike anything they ever knew when they were children. We think it’s important to get a genuine understanding of what’s happening to our children, so I asked her if we could run her comments on the blog. — Professor

We were in the emergency room again last night.

We’re home, and doing well now, after a failed first attempt at hospital discharge — K rebounded with new welts, so we had to stay longer for more meds and observation. We were able to leave around 11 and spend the night at home with regular Benadryl dosing (and EpiPens within immediate reach). He had a few welts this morning, but is now looking normal and feeling good. We still don’t know what caused the reaction, and will try to figure it out by process of elimination once this has passed and we’ve all recovered a bit. Thank you again, friends, for the Facebook support, texts, calls, prayers, juju and love. It really makes all the difference.

After each allergy-related ER visit, I’ve found myself a little shell-shocked. Food allergy is f*cking terrifying. Doctors are the first to admit they know almost nothing in terms of predicting what might happen or managing it (beyond epinephrine and steroids), and that’s scary. Last night I was told the same things: there is very little data, really no way to know which direction this will go, or if it’ll stay the same or turn into airway closure 48 hours later without warning. There’s just no telling. So we opted to go home because there’s no food in the hospital my kid can eat, and he might get itchy on the sheets and, well, I have EpiPens in the event of things heading south. 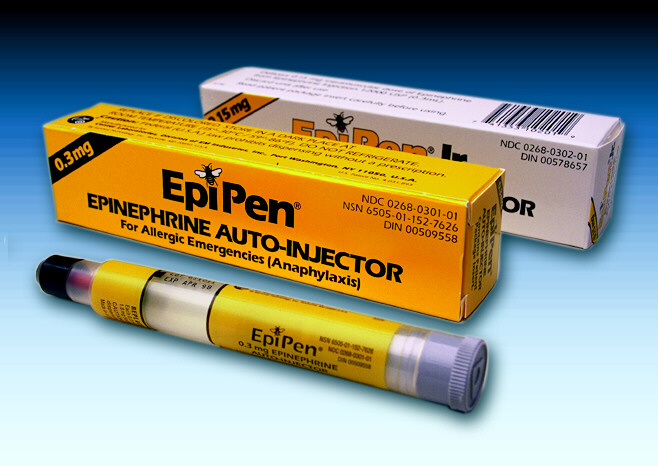 EpiPens work if you catch the reaction before the airway closes. They work for about 15 minutes so that you can get to a hospital via ambulance and start steroids and other meds to try to stop an allergic reaction from progressing. But much of this is guesswork, even at the hospital, and when I looked the doctor in the eye last night (deliberating whether it made sense to get admitted overnight or go home) and asked if my giving epinephrine in the event of wheezing sounds would mean my kid wouldn’t die, the doctor looked away. I knew better than to ask because the fact is they don’t know. Sometimes EpiPens don’t work. Mostly they work — they serve their 15-minute purpose — and I am so so glad we have them. But still, life or death decisions hinging on probably-maybe-mostlys are no fun to make . . . especially when you make them all the time.

We bought a Christmas tree; they offered us cocoa. We declined for K, briefly explaining. Christmas tree guy says oh yeah, his granddaughter has that — peanuts, all nuts, extreme allergy, EpiPens, the works — he gets it. We filed paperwork with the school system, switching districts to attend classes at a homeschooling school (stay with me here — just think community college for kids: sign up and attend individual classes at will). Had to write in a reason. Wrote it in: severe food allergies. Oh yeah, says the lady behind the desk. My nephew has that: eggs, soy, wheat, EpiPens. Then we went to the emergency room last night. Four doctors in the room, ready to go if shit gets crazy. The scene stayed calm (if incredibly disconcerting, as K was covered in giant welts everywhere), and the head doctor says I get it, my daughter is the same way. We’ve had full-on anaphylaxis and all. She’s five: food allergies, eczema, EpiPens. And I say, “I’m sorry.” And he says, “It’s okay, it’s just the way life is.” 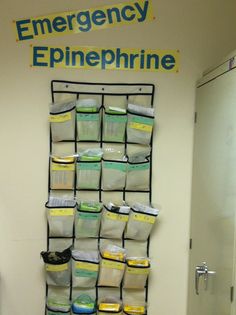 One school’s wall of EpiPens

I’m glad people get it, y’all. That really helps in the face of asking people to put their peanut butter away all the time. But I’m so disturbed by this, too. So many people get it because so many kids have this, and this is not “natural,” or “normal,” or “okay.” I didn’t know one kid with peanut allergy in school. Not one. Now these long lists of allergies are commonplace. And what this means, on the ground, for these kids and for families like ours, is that when we’re just hanging out having an evening, our kids can wind up in the ER with giant welts. When we go to birthday parties, kids run around our kids with food that could literally kill them. When we go anywhere and do anything, we carry the EpiPen because we carry the possibility and likelihood of medical emergency. And we stop working our jobs, and stop cooking our favorite foods, and stop sleeping through the night really ever, and stop ever really not being on the lookout, at the ready, on guard. It’s traumatizing.

This is not “just the way life is.” This is not just the way life should be. So while I will continue to pony up and make the very, very best of this bullshit situation in our family’s life, I’m not going to stop talking about what’s behind this, and I’m not going to stop saying it needs to stop. Last year, right around this time, the socially acceptable population to hate was the alleged “anti-vaxers” (tiny, tiny population, by the way . . .) in the name of science. Let’s force people to subject their babies to a medical procedure that is actually, scientifically  documented as causing severe brain damage, and even death, to some portion of the population. You know what else we’re doing to a much larger portion of the population? We are upending, derailing immature immune systems and causing severe allergy in one in 13 children. 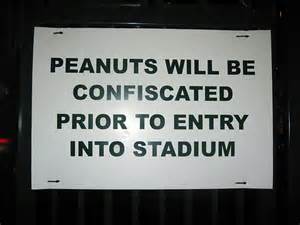 I was terrified when pregnant with O, terrified this would happen again. I was terrified to vaccinate, terrified not to. I asked K’s immunologist in New York, at a leading research hospital, if I would be making the right decision to hold off on shots for our new baby. “I’ve researched, extensively, and given K’s reactions to vaccinations and their effects on the immune system and the overwhelming evidence that vaccines are contributing to the food allergy epidemic, I just . . .  Is this crazy?”

Do you know what the doctor said to me? The immune system expert? She said I wasn’t crazy. She said, “We all know.” But I could never quote her on that, with her name. She’d lose all of her funding. It’s in her research hospital policy. She can try to rescue these kids downstream, but she can’t do anything about the source from which the problem flows, from which the funding dollars flow.

Once again, I am not saying vaccination is all bad. I am saying medical transparency is all important, medical choice is all important, and science is all powerful only if it is unbiased and used to its greatest potential in finding the very best, very safest ways to achieve its aims. I am saying one in 13 children is not okay. I am saying K being anaphylactic to food is not okay. I am saying that if any one tiny good thing can come out of the extreme difficulty and terror that we live with every single day, it would be you not supporting any conversation or legislation that oversimplifies the science around vaccination and seeks to remove the rights of parents to informed consent. (TIME f*cking magazine thinks parents who make their own choices around vaccines should have their addresses published publicly. Every parent should be revolted by that kind of sentiment and shame the publication that perpetuates it.) It would be enough parents — even those who do choose to vaccinate fully according to the CDC schedule (many doctors don’t even do this, y’all) — taking seriously its risks and expressing concern over epidemic food allergies and other related illnesses to create a groundswell of support for science creating safe vaccines. Vaccines that do no harm.

Since I can’t quote the immunologist on record and thereby ruin her career, I’m going to share this interview with Heather Fraser, author of The Peanut Allergy Epidemic:What’s Causing It and How to Stop It.  Please read it. I think it’s really important.

Thank you. Much love.

who is tired of ER visits and thinks eating should not be a deadly activity for children.

60 Responses to Anaphylactic Food Allergy Is NOT Normal