CHICAGO Families (and Beyond)! The Science of Nutrition and Autism 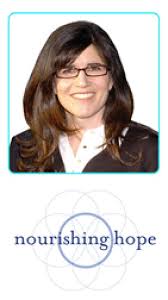 In the 12 years I’ve been researching the science of autism and nutrition there have been dozens, dare I say hundreds, of studies that support that autism is physiological—there are gut issues, genetic mutations to folate chemistry, nutrient deficiencies, food intolerances, and other studies supporting nutrition and diet intervention for autism.

Yet, we still hear in the media that “diet” for autism is not founded in science. While I find this infuriating, the truth is, science is on our side. We don’t need to wait for mainstream to catch up—in fact, that is one of the wonderful things about the Thinking Moms, you don’t sit around waiting for “official approval” by the mainstream.

I love sharing the science in order to help families understand why food and nutrition choices matter, and how to make helpful changes.

September 19th(Thursday) in Chicago, IL I will be leading a food and nutrition workshop in collaboration with Thinking Mom’s Revolution. You’ll learn the scientific rationale and “how to” of special diets—becoming better able to help your child through this approach, and to debunk any “naysayer” trying to convince you not to care what you feed your child. Autism/ADHD can improve. 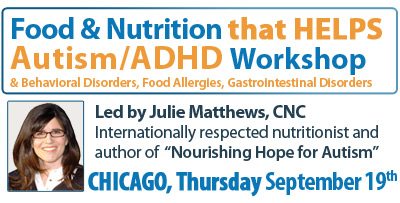 As a prelude, here’s just one of the most recent studies on autism. I will be sharing much more on oxalates, salicylates, amines, gluten/dairy, grain-free diets and more at the event. I hope you join us! And thanks in advance for sharing this with families in the greater Chicago area. More details at: http://NourishingHope.com/upcoming-events/Chicago2013.

Researchers at the Columbia University Medical Center found significantly elevated antibodies to gluten in children with autism. The study, led by Dr. Nga M. Lau, involved 140 children—37 with autism, 27 unaffected siblings, and 76 age-matched healthy controls. They found specifically, “Children with autism had significantly higher levels of IgG antibody to gliadin compared with unrelated healthy controls. The IgG levels were also higher compared to the unaffected siblings, but did not reach statistical significance. The IgG anti-gliadin antibody response was significantly greater in the autistic children with gastrointestinal symptoms in comparison to those without them.” (Reference: Lau, Nga M. et al. “Markers of Celiac Disease and Gluten Sensitivity in Children with Autism.” PLOS ONE 8, no. 6 (2013): e66155.)

Antibodies are the body’s way of “sounding the alarm” to kick the immune system into gear and rev up inflammation (and pain) to fight a perceived threat of an invader, such as a virus. When a food substance (like gluten) is the perceived invader, the subsequent inflammation and digestive upset can go on for months or years, whenever the food is consumed.

Finding these elevated antibodies in children with autism is significant. Antibodies indicate that the body is likely creating inflammation and that the food source can be causing irritation and GI symptoms. These findings indicate that further research into the role of the immune system in autism, as well as gut issues in autism is warranted. This study also showed that while there was increase in these anti-gliadin antibodies, there was no increased incidence of celiac disease: This is consistent with other study findings that demonstrate that that people can have a problem with gluten, even if they don’t have celiac. These findings further support the notion that families with autism should be aware of the role of gluten in the diet, problems it can affect, and the benefit of avoiding it altogether; especially if a child suffers gastrointestinal symptoms.

In the study, of the children with autism that had gastrointestinal symptoms, the anti-gliadin antibody response was “significantly greater” than those without symptoms, showing that special diets are particularly important with GI issues.

The researchers concluded, “A subset of children with autism displays increased immune reactivity to gluten, the mechanism of which appears to be distinct from that in celiac disease. The increased anti-gliadin antibody response and its association with GI symptoms points to a potential mechanism involving immunologic and/or intestinal permeability abnormalities in affected children.”

This is only one recent study on the underlying factors in autism; there are literally hundreds of research articles that support giving special attention to children’s food and nutrition.

It is my mission to empower parents with knowledge about the science of nutrition, so moms on the front lines, can discover more ways to help your children, and effectively lead their healing team.

Share this information and our special discount code for The Thinking Moms Revolution—families will save $20 bringing the workshop fee to just $25. Use code – TMR.

We will also be doing an event in Tampa in October. For more research, support, and information on the events go to: More at http://NourishingHope.com

I hope to meet many of you Thinking Moms at our Chicago event!

One Response to CHICAGO Families (and Beyond)! The Science of Nutrition and Autism