My Child Is Not Recovered

From February to May,  my twins were in a severe behavior treatment program, M-F, six hours per day at our local autism center. It was very hard for me to withdraw them from school for 12 weeks, but ultimately I chose to do so after three long years on the waitlist, despite the less than optimal timing. When they finally do go back to school it will have been almost eight months since they were last in a classroom. This has been a bittersweet school year trying to get to the root of why they have not made much progress educationally or in regards to using their AAC (augmentative and alternative communication) devices, but that is another long story. 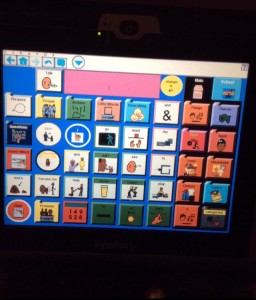 Each day we waited in the lobby of the autism center with other children going through the same department, and my heart ached. I saw teenagers profoundly affected by autism, unable to verbalize their needs, flopping on the ground while their exhausted caregivers tried to get them into chairs. One afternoon, while I was waiting for the day to end, I watched an older non-verbal boy restrained by therapists, who thought he was going to elope, only to realize that he just wanted to peer over the check-in counter and see the people inside, or at least the computer.

No, my kids are not recovered. We started biomedical treatments at age three-and-a-half, after going gluten-free and casein-free shortly after their third birthday, because it was the only treatment I could afford. We have tried many interventions since, and they have been described as “tough nuts,” which I agree with. What has complicated things more is that my twins are identical, which means that logically they should respond to the same things, right? NOPE! 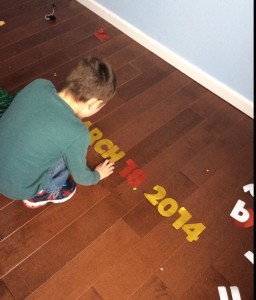 Five years later, their diagnosis remains. Yet, seeing the stream of children at the autism center, I can’t help but be relieved that I found biomedical treatments when I did. My boys are tough nuts, but underneath their many complicated layers is intelligence and a will to learn. One is constantly experiencing PANDAS flares and has been absolutely obsessed with numbers, the days of the week, and the calendar for almost six months now. Had I not found this community, I would have no idea what to do or what this was. Now I am treating it. I am actually relieved that he is fixated on numbers and letters, because he has shown me that he can spell correctly, type independently and now — thanks to an orange marker — write the date very well on his closet door. I was so happy to see that his numbers look so clear after five years of OT that barely yielded his name (which is only three letters), because he never wrote anything independently. He is saying numbers and days with better pronunciation, despite no regular speech therapy at the moment and severe apraxia. His brother seems to have a great dislike of school, but has an uncanny knack for creating his own levels in computer games that allow editing. Both have had a great deal of difficulty expressing their potential in school in an MOID class room where expectations are low. The only benefit of OCD and obsessive behavior has been finding out that they apply their skills that aren’t always evident when it involves something of intense interest.

Now what would have happened if I had given up after six months of going GFCF? Their GI issues improved, but I was making many items from scratch and, with four kids, I was exhausted. It would have been easier to quit, because the results weren’t as amazing as I had been reading. Each time I saw a post where parents  excitedly exclaimed their child started talking after a few days on the diet, or after starting MB-12 shots or fish oil, I was happy for them but a little sad. Yet I kept going. We tried a couple of things that had some wows, but mostly not. I refused to give up despite the fact that our path to recovery was not exactly what I thought it would be. It would have made sense to do so after year one, two and three rolled by and the “window had closed” (seriously?) when we hit their sixth birthday and no speech. I am a firm believer in hope, and attended ARI conferences and read. I still do. Although I have never been to the Autism One conference in Chicago, I look forward to the archived presentations each year. This year has been better than ever in this regard, where many lectures have been made available free of charge, and are a gold mine of information. Did I also mention that Tex TMR (Thalia Michelle) also has a series of interviews with the presenters? If you haven’t, you really should start watching.

What I have found is that my kids are complicated and that the more you hang in there, the more information comes to light thanks to the dedicated doctors in our community who are tirelessly researching answers. By no means do I think this is close to being over, because there is an answer and a cause behind everything even if we do not understand or know what it is yet. What if I had given up before Dr. Rossignol and Dr. Frye had researched cerebral folate deficiency? Or learned that mitochondrial dysfunction is a hallmark of non-responder children?

Often I see mainstream websites and news organizations are increasingly reporting “new discoveries” that biomedical families have known about for years because they are not waiting for the rest of the world to catch up with the science. Think probiotics, leaky gut, gluten intolerance and treating ADHD with diet not drugs. All of the things that pediatricians, specialists and therapists have disregarded when I asked their advice. 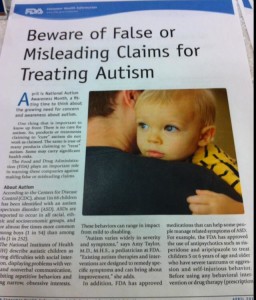 My children do not fit the parameters of recovery, yet I know that if I had given up my boys would not be where they are today. They may not be indistinguishable from typical peers, but they have progressed. It pains me to see the children in the waiting area who have a soda bottle sticking out of their back packs, to see parents feeding them orange chips out of vending machines in the lounge, and to know that the hope offered to them through a location of the children’s hospital is not the same as what I have. In the parent resource library at the center they put out flyers sponsored by the CDC and FDA during autism awareness month 2014, warning against biomedical treatments and emphasizing anti-psychotic drugs as accepted practices in an effort to discourage those interested. While the media seems to be slowly catching on, not much has changed at the institutional level regarding treating autism with diet and biomedical and alternative treatment protocols since the boys’ diagnosis in 2008.

No, my child is not recovered — yet. Our version of recovery will be the best health and healing possible. We are in it for the long haul.

About the author – Karma is a mom to four kids that spend way too much time navigating their dirty mini-van through the urban sprawl that is metro Atlanta. She proudly supports Generation Rescue in the role of parent mentor for their Family Grant program. When asked, “How do you do it?” the answer is simple:  coffee, Belgian ale, and an odd sense of humour. She is the co-author of Evolution Of A Revolution: From Hope To Healing and is a member of <a>TEAM TMR</a>, a not-for-profit organization created by the  founders of <a>The Thinking Moms’ Revolution</a>. For more by Karma, <a>CLICK HERE</a>.

6 Responses to My Child Is Not Recovered