Featured Guest Blog: Their Ounce of Prevention Is Not Worth Your Pound of Dysfunction

The FDA has exclusive authority to approve and license vaccines. The FDA also oversees vaccine safety, and herein lies a vast problem that demands correction. This conflict of interest creates inherent flaws within the FDA. Additionally, the FDA’s deficiencies are numerous, thereby compromising its utility.

One inherent flaw creating the opportunity for conflicts of interest is that the FDA Commissioner has authority to appoint members of its advisory committee. The FDA’s advisory committee reviews and evaluates information about a new vaccine’s safety and efficacy. There have been numerous conflicts of interest of advisory committee members with significant financial relationships with pharmaceutical companies. Despite these substantially conflicted committee members, the FDA granted waivers so they could continue to give recommendations on vaccination approval to the FDA like in the cases of Prevnar and Gardasil.

Since 1992 the FDA receives financial backing from pharmaceutical companies on the condition that the FDA spends a certain amount of money on approving new drugs. As a result, the majority of the FDA’s budget is spent on new drug approvals. Under the law, vaccines are drugs. With so much focus on pre-approval of vaccines, little time and resources are spent on monitoring post-approval vaccine safety. 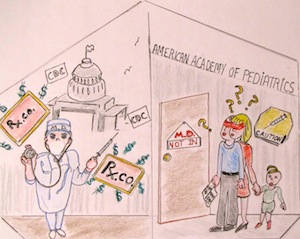 Besides the conflicts of interest issue, FDA regulations are minimum safety standards. One reason is because the FDA plays a passive role in vaccine safety. The FDA only looks at the data from clinical trials submitted by the pharmaceutical companies to determine a vaccine’s safety and efficacy. Vaccine manufacturers consider this data as proprietary information. As a result, although the FDA has the option to conduct its own tests, there is no other independent, secondary review. Given its lack of resources, it is unlikely the FDA will conduct safety testing to verify the submitted data.

Pre-approval clinical trials do not accurately identify vaccine safety issues. First, clinical trials involve only a few thousand people. This small sample size may not adequately represent or include groups such as those children with high risk for adverse reactions or those children with past adverse reactions. Second, side effects with a long latency period will not be revealed during clinical trials. In fact, the time period for examining side effects post-administration of vaccines has become shorter. With a shorter time period, there is less opportunity to observe any side effects from vaccination.

Another way the agency is passive is the FDA lacks the authority to require pharmaceutical companies to adopt the safest or most optimal vaccine design in the approval process. The FDA considers only what vaccine design the vaccine manufacturers submit. Because of this passive role, FDA regulations do not keep pace with the quick advances in science and technology.

FDA testing is inadequate. In the past, there were labeling discrepancies between actual potency and labeled potency. Also, inadequate FDA testing of vaccines occurred when the FDA failed to test the result of temperature fluctuations on vaccines when vaccines were in transit. Unfortunately, this oversight resulted in a more toxic vaccine. Lastly, since the FDA is not required to test each vaccine lot submitted for approval, variations with vaccine lots are difficult to detect.

The FDA is problematic because it suffers from chronic understaffing. The partial solution was the Food and Drug Administration Modernization Act of 1997 that authorized the hiring of 600 new FDA reviews paid for by the pharmaceutical companies. Another problem with the FDA is that it suffers from underfunding. In fact, the FDA looks to the pharmaceutical companies for funding for its vaccine safety research. Furthermore, the FDA lacks the power and resources to follow up with pharmaceutical companies regarding vaccine safety post-approval. Once a vaccine receives approval, the FDA has limited authority to demand data from vaccine manufacturers. It is very concerning that the FDA is lax in its oversight of vaccine safety post-approval, because that is when harmful side effects from vaccines are most likely to be discovered.

The FDA’s minimum safety standards are disturbing given the National Childhood Vaccine Injury Act of 1986. This law gives vaccine manufacturers the presumption that a vaccine in compliance with FDA regulations and other federal regulations is properly labeled with accompanied warnings and proper directions. In other words, FDA compliance satisfies a vaccine manufacturer’s duty to warn of side effects from vaccines. Historically, the FDA has been slow to withdraw or warn about vaccines with adverse side effects.

There are numerous shortcomings of the FDA including its faulty approval process and its misguided priority on new drug approvals. The FDA cannot effectively act as the guardian of public health when it is as structurally compromised and unduly influenced by lobbyists, such as pharmaceutical companies, as it is now. It is failing in its sacred duty and has destroyed so many families. It goes without saying to use extreme caution and common sense when scrutinizing FDA approved new vaccines. They are not safe and effective, but the FDA wants you to believe they are.

Susan Lee is an advocate for vaccine-injured children and their families. This entry is a summary from her article “Sacrificing Children’s Safety for Vaccine Supply: Nonexistent Safeguards for Remedying Mandatory Defectively Designed Vaccines” available at http://papers.ssrn.com/abstract=2364071

6 Responses to Featured Guest Blog: Their Ounce of Prevention Is Not Worth Your Pound of Dysfunction