During the summer, I usually have about three minutes daily to myself. It really sets the stage for big messes to occur — grown-up messes: bills missing due dates, bathrooms going uncleaned, and missing blog deadlines. Well, I didn’t actually miss the blog deadline — I just didn’t realize it was a Sunday… Silent Sunday. In the past, this house had seen far too many “Silent Sundays.”  My son lost his voice at around 18 months and did not find it again for almost four years. So I dug out a summer picture that I loved and begged someone for a non-silent blog date.

I have been thinking a lot about those “quieter” Sundays (and the rest of the days of the week) a lot lately. Probably because I found this PEC on the floor the other day. 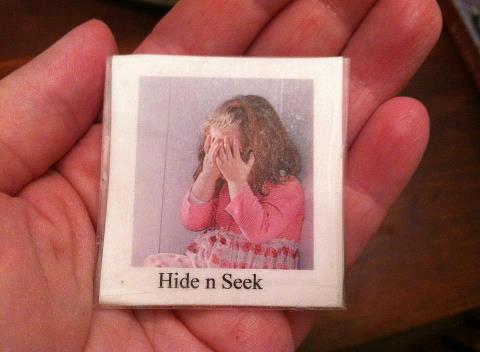 I find old stuff on the floor a lot, but this sent me back to a time when we worked for every single piece of information that came out of my son’s brain.

For years we talked to him all the time, read things, pointed things out to him, and narrated our goings on. “They” say that the constant chatter gives kiddos learning to communicate something to model and a connection. It is one part of what is called “language immersion,” or modeling. I didn’t realize the extent of my “narration” until I was on a rare trip to the grocery store by myself. As I walked the aisles, I had to stop myself dozens of times as all those “inside thoughts” you have in the store became “outside thoughts”:  ”Oh, I wonder where they moved the darned maple syrup…,” etc. It all paid off, though, when, one day, I sat with my son on the sofa with his favorite hard cover Blue’s Clues Compilation 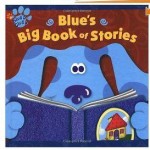 book and labeled all the cool things we were seeing on the page… and he slowly p o i n t e d to them. Pointed! So started our conversations: “Which crayon do you like?”, “Where is Magenta?”, etc. It opened up a whole new activity for us.

Which brings me to this blog’s list:  “Things LuvBug’s Experience Tells Her is Important for the Pre-Verbal Kiddo” (not designed to be scientific – designed to stimulate ideas):

1. Narrate your life. Yes, you will look insane at times. Yes, you may hate the sound of your own voice eventually.  Yes, it will pay off. Our kiddos are sponges and they remember things that you would never remember. And you talking to them –- feeding them information about their world –- is one of those things.

We knew our son was hearing and understanding us, but we needed a more consistent way for him to communicate his needs and wants to us. We used signs and pictures to help him make choices. He went to a school that specialized in communication disorders, where they taught simultaneously in spoken word, pictures and sign language, thus, giving each child an exposure to different modes of communication – more chances for them to learn and maybe adopt a mode that appealed most to them. As he got older, our son’s envelope of pictures we carried around developed into a three-inch binder BURSTING with 1”x1” laminated, Velcroed images, arranged by loose categories, so he could “tell” us lots of different stories. (He was still pre-verbal at this time.) The first time he told me something novel and unprompted is burned into my brain.  He pointed to the picture of his school’s Office Manager, phone and then TV. Then to the TV picture, signed “in” and then pointed to the phone picture. He was telling me that this woman had a phone with a TV in it. Really? Wow. Guess what? She did; it was a security measure for letting people into the locked school. This wasn’t a discussion about food, or potty or a place he wanted to go –- he was sharing his day. HUGE!

Which brings me to my next personal belief that can be loosely backed up by fact:

2. Signing does NOT make a baby/child lazy. Neither does PECS (or other picture-based communication systems). This is akin to saying patients recovering from strokes will become lazy if given walkers.  Luckily, we did not encounter any of this BS when our son lost his voice. The Early Intervention Speech Therapist tried to immediately give us alternates to voice. Signing was getting us exactly nowhere –- his fine and gross motor were toast — but she devised some picture-based communication systems. One of the best ones was a flip chart of toddler songs. We took that chart to his daycare, and he was able to participate with the other kids when it was his turn to choose a song. It showed him cause and effect as well as how empowering communication can be. (Sometimes you need a big motivator when something is really hard to do.)

Rachel Coleman, founder of Signing Times has a great downloadable set of research addressing the impact of using sign language in hearing populations. Spoiler alert: it’s a help not a hindrance.  This research was commissioned by Signing Times’ production company.

The HUGE binder presented an access issue. Opening the binder was a PT exercise in itself; it was just too big. So we worked with an AAC consultant to come up with a better system. Given his language stage 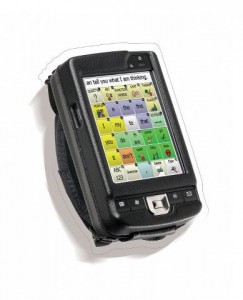 and small stature, she suggested a certain electronic AAC device.  It still was somewhat heavy for him, clunky for staff and parents to program –- but it was much more manageable than “the binder.” I tentatively put my laminating machine away and used my PECS/Binder time to program this beast. That was five years ago and the leap in technology since then is just amazing! The cash we paid for this device could purchase about four iPads these days, but the gift given was priceless.

Which brings me to my next highly suspect, loosely backed fact:

3. It is NOT okay to take a child’s AAC device from them because they are using it “wrong.”  Yes, I know that kids can get stuck on their devices, pressing the same keys over and over, or use them as toys, or be really annoying with the sounds they make and then not pay attention to the lesson at hand.  But, um, has anyone hung out with kindergarteners recently??? They do the same shit except with their voices. Yep – they are pretty annoying with their constant questions, and fart noises, and giggles, and enjoying the new sounds they can make with their mouths. So do you put duct tape on their mouths? Do you literally jam a sock in their mouths? Cut out their tongues? No. You teach them. You teach them the right way, the right time, the right words. You send them to the time-out chair, or to their room, or take away privileges. But don’t take away their voice. (I also realize that there is always the exception that proves the rule and 10 continuous hours of a computerized voice saying “Dora, Dora, Dora,” falls into that category. Put the device away until you can figure out how to manage that “lesson” tomorrow when your brain is not smoking.) But, generally, I am talking about school. We had to work with the school so they would give our son access to his AAC all the time, not when it was convenient for them, and teach him about appropriate “talk time” and appropriate use of his AAC.

By this time, we had speech. Sweet, sweet speech. But most was unintelligible to the untrained ear — sometimes even to my very, very tuned-in ear! The electronic speech device was frustrating because it was slow, and he wanted to use his own voice. So, with the help of the AAC consultant again, we developed a mini 5″x7″ book –- almost like a softcover photo album. Images (or just words since he was reading) were grouped by category, and the front page was the alphabet laid out in keyboard format so he could spell words that were being misunderstood.

Which leads me to…

4. Sometimes back to square one is okay. It has to be okay to admit that a course of direction is NOT working OR it worked so well, that your child is ready to move onto the next phase of communication. Believe me, I know it’s frustrating. I am the one with a $1200 AAC device that nobody in this house has interest in. But if you don’t try, you won’t know.

As our son started working on play and social skills, the above modes of clarifying his speech didn’t work as well. His peer group was younger than him and typically could not read or spell and had little patience for speech clarification.  The same AAC consultant suggested some iPod apps that had voice output that might be more socially acceptable or at least easier for younger kids to understand.  For less than $200 we had our next voice output system. The voice was amazingly clear, the app was so easy to use and it was light as a feather.  I love technology!

The other day my son and I happened upon some old family videos. At the time the videos were taken, he had just begun to utter his first intentional words since his regression. The word STUNNED does not accurately describe me as I watched all these videos. He did not utter ONE SINGLE WORD. He maybe used a handful of signs. In my mind, my memories of this time were of him communicating so clearly – so purposefully. But when compared to where we are today, this “first contact” communication was so incredibly primitive. That’s when I realized how important all these other modes of communication were in our journey to speech.  All of this was a foundation upon which our relationship, history and communication strategy was built.

Which brings me to my FINAL nugget of… ahem… wisdom:

5. Alternative forms of communication for your pre-verbal kiddo are NOT “giving up.” You are not admitting your child will never speak. You are not giving them permission to be silent the rest of their lives. You are giving them their voice –- their NOW voice. My husband and I struggled with this each time we moved to a new AAC device, whether it was binder or electronic device. Every switch was almost like admitting defeat –- again. It was painful.  But try not to take it as a signal of defeat. Look at it as a preparation for success. We like to joke that it took the most expensive voice output device to spur him to speech!

Some of our kids have a long, long road to travel to find their voice – these are only a few of the stops on our path. I’m sure there are different routes for all our kids. There is not just one “correct” path. I’d love to hear other paths, ideas, and creative techniques for creating our kids’ NOW voices.

15 Responses to No More Silent Sundays