The CDC has sunk to a new low in manipulative marketing practices. Yes, I know that’s hard to believe, but if you take a look at this fotonovela or Spanish language motion comic book Un Amor Perdido you will be hard put to come up with any other conclusion.

Monica and Jorge, a pregnant Hispanic woman and her husband go to a prenatal visit with their obstetrician, who recommends flu shots for the whole family. Monica is reluctant. She’s never needed a flu shot before, including her previous pregnancy, and she is understandably hesitant to add drugs to her system that are not required at this sensitive time in her baby’s development.

The doctor reassures her saying, “Don’t worry. The flu shot is safe. It has been used for more than 50 years – Millions of people, including pregnant women and children, have been safely vaccinated.”

Nice blanket statement, huh? Very reassuring. You would think we’ve always been vaccinating pregnant women with no problems whatsoever. I wrote a blog on the flu shot (Flu Shot Clinic) back in December for which I did a lot of research, and this doctor’s bland reassurance could not piss me off more. 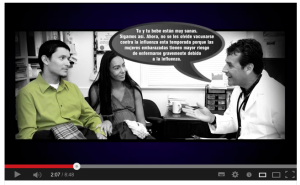 Un Amor Perdido. A Spanish language motion comic book based on a true story of a Hispanic couple expecting their second child. www.cdc.gov

Firstly, the “regular” flu shot, which is recommended for pregnant women, contains thimerosal. I’m not going to go deeply into thimerosal here (for an in-depth discussion read Evidence of Harm by David Kirby), but it contains mercury, a potent neurotoxin (i.e. something that kills brain cells), and is a bad idea for anyone. It is a particularly bad idea for someone who has a developing baby inside her. There are “thimerosal-free” versions available, but they are not common and many doctors’ offices don’t stock them.

In addition, the “thimerosal-free” is in quotes because even those shots may contain “trace amounts” of thimerosal, as the vaccine manufacturing process involves the use of thimerosal and the thimerosal must be removed. One hundred percent removal is a more-than-difficult task.

Next, the package insert for Sanofi Pasteur’s Fluzone, one of the most commonly given flu vaccines, clearly states, “Pregnancy Category C: Animal reproduction studies have not been conducted with Fluzone. It is also not known whether Fluzone can cause fetal harm when administered to a pregnant woman or can affect reproductive capacity. Fluzone should be given to a pregnant woman only if clearly needed.” (emphasis mine) According to the FDA, Category C drugs are those where “Animal reproduction studies have shown an adverse effect on the fetus (emphasis mine) and there are no adequate and well-controlled studies in humans [because that would be “unethical”], but potential benefits may warrant use of the drug in pregnant women despite potential risks.” In other words, Category C drugs, like flu shots, should only be used if they present a clear benefit to the recipient.

If you read my previous flu blog, you will know that in an average year for every 100 flu shots approximately one case of the flu will be prevented. And if you read the Fluzone package insert, you will know that 30% of all recipients in the age range of pregnant women get headaches; a smaller percentage experience malaise, myalgia (otherwise known as aches and pains), shivering and fever. Approximately 1-2 percent of the recipients of the shot experience those side effects badly enough that they are unable to perform their usual activities. In other words, they feel like they have the flu.

Sounds to me like you would be hard put to find even one person in that population who received a clear benefit from taking that drug, while 99% will have taken on the risks for no benefit at all. Does that sound like something that one could “ethically” recommend to all pregnant women? 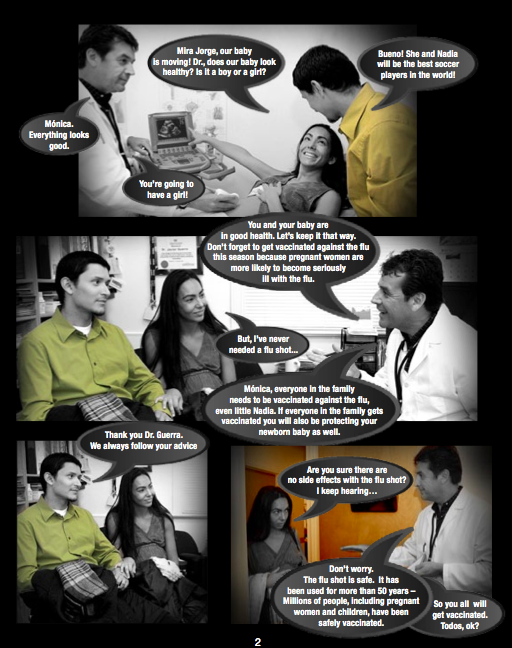 Fotonovela, A Lost Love. Un Amor Perdido. A true story about flu vaccination for your family and your loved ones. www.cdc.gov

Hmmm . . . Sounds familiar, doesn’t it? What do you think the odds are that the CDC is trying to co-opt our motto? Readers at this website know, usually firsthand, what frequently comes of not thinking for themselves and blindly following doctors’ advice: chronic illness and a spiral of increasingly dangerous pharmaceuticals. So, yeah. Think about it.

Here’s where the CDC really runs off the rails: Monica has to be punished for listening to her intuition and avoiding taking a potentially dangerous drug while pregnant. They actually have her die from the flu! Because, despite the fact that the flu shot only prevents the flu in approximately one percent of the recipients and it makes another one percent feel like they have the flu, the result of not getting one – clearly – is death.

Clever. By saying, “She didn’t get a flu shot, therefore she died,” they’re implying without having to say it (because that would be lying) that getting the flu shot would prevent Monica’s or any other pregnant woman’s “flu” and, therefore, death. According to the Public Health Agency of Canada, the majority of ILI, influenza-like illness – what we call “flu,” in the 2000-2001 season, was caused by things other than influenza viruses. In fact, only about 10% of all “flu” was caused by influenza A or B, those contained in a flu vaccine. This year, the CDC claimed about a third of all people with flu-like symptoms tested positive for influenza. That means, at best, the flu shot can only reduce your chance of having or dying of the “flu” by one-third of what it would have been in the first place.

First off, very few women of child-bearing age die of the flu, in pregnancy or otherwise. I’ve heard just about every kind of pregnancy horror story there is, and I’ve never known or even heard of anyone who died of the flu during pregnancy.

Secondly, the recommendation that all pregnant women get the flu shot is a relatively recent thing (as indicated in the story – Monica, who “always follows Dr. Guerra’s advice” and has a child already, has never had a flu shot).

And, thirdly, people who listen to their intuition or their “gut feelings” are rarely sorry, the reason being that those feelings really do serve to protect you and your children. (Read Gavin de Becker’s The Gift of Fear and Protecting the Gift for an eye-opening discussion of this subject.) I had a baby who died. Having attended a support group and a conference for parents of babies who died, and “hanging out,” as I do here at TMR, with a lot of folks whose kids regressed following vaccination, I have heard a lot of parents express regrets. I have never once heard someone say, “I’m so sorry I listened to my intuition.”

And, lastly, I get to what is potentially the most problematic element of this propaganda campaign, and the one I am least qualified to discuss, the blatant targeting of the Hispanic population with this manipulative piece of crap. It strikes me, as a white woman of European heritage, as racist propaganda at its finest – or worst, depending upon your perspective. As husband to a Thinking Mom put it, “Do they think they are too stupid to read on their own and have to do a picture story instead?” TMR’s Tex, who is originally from Panama and is quite proud of her Hispanic heritage, had this to say about it: “I, for one, am disgusted with the CDC for this dictatorial propaganda. Yes, I am saying this kind of material is despotic. The video in question is patronizing, demeaning, misinformative, manipulative and quite frankly . . . racist. It’s an offense to the entire Hispanic community.”

(The language used is indeed patronizing and manipulative. It is a blatant attempt to manipulate emotions and shut down thinking and maternal instinct in the population it is aimed at. I don’t know much about Neuro-Linguistic Programming (NLP), but I have heard that those who have mastered it are very good at persuasion. Dave Mihalovic has written a blog about how the manipulation techniques used in these propaganda pieces come straight from the NLP playbook.)

Watch Tex’s reaction and appeal to the Hispanic community to let the CDC know just exactly what they think of their demeaning and manipulative effort to get Spanish –speaking people to set aside their own common sense and parental intuition, and risk their health and that of their children by taking a Category C drug when pregnant that has no clear benefit for the average pregnant woman.

Please watch Tex in the following video by Tex.

If you are having trouble viewing this video click here or copy and paste this url into your browser: http://www.youtube.com/watch?v=tVmBTSrF6AA&feature=youtu.be

English translation of the video

I would like to take a minute to publicly address the CDC’s pathetic propaganda campaign targeting the Hispanic community.

“Un Amor Perdido” is an insulting and patronizing attempt to influence Hispanics into getting a pregnancy flu shot. Using a telenovela format, the CDC tells an overly dramatic tale about an unvaccinated mother who dies of the flu while pregnant, leaving her family motherless.

I for one am disgusted with the CDC for this dictatorial propaganda. Yes, I am saying this kind of material is despotic. The video in question is patronizing, demeaning, misinformative, manipulative, and quite frankly — racist. It’s an offense to the entire Hispanic community.

Apparently the CDC believes Hispanics are ignorant and must be spoken to as idiots. There isn’t a single reference to science or research in this drivel. There is only a poorly written piece of dramatic hogwash that feeds stereotypes and is designed to brainwash the ignorant. I won’t address all the ways the telenovela format stereotypes Hispanics. What I will do is make a plea to my fellow Latin-Americans to speak out against this blatant form of condescension.

Please go to the YouTube video for “Un Amor Perdido” and comment. Your comments will most likely not be approved, but someone is reading them. Click on the thumbs down symbol as well and let those votes reflect our disgust at being spoken down to. Finally, please write the CDC at 1600 Clifton Rd., Atlanta, Ga 30333 or call 800-CDC-INFO and express your views. Thank you for taking the time to stand up for yourself and your community.