I got a new smartphone last fall, and I’m slowly accumulating all the apps required to navigate life in the 21st century:  Google Maps, The Weather Channel, the New York Times, Pandora, Scrabble, etc.  One of the best things about my new phone is that it has enabled me to take up a spiritual practice I had largely abandoned:  playing Bejeweled Blitz.

For those who don’t know, Bejeweled Blitz is a fast-paced game that takes only a minute to play.  You line up three jewels in a row; they disappear from the screen, and new ones drop down to replace the old ones. The more matches you make, the higher your score. There is always at least one match on the board. You get extra points for lining up four or five jewels.  If you go really fast, you get a bonus called, “Blazing Speed,” where, for about five seconds, half your screen seems to blow up with every match. If you’re really lucky, or good, you’ll combine the Blazing Speed with lots of bonuses and multipliers and you’ll really rack up the points, causing all sorts of explosions.

I know what you’re thinking.  Spiritual practice?!  Who is she kidding?  She’s just trying to justify a complete waste of time!  Okay, I admit there might be something to that theory . . .  But let me tell you about some of the insights I have gleaned from my “practice,” and you be the judge. 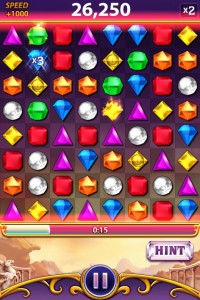 Fifteen things I have learned from doing the Bejeweled Blitz Meditation:

1) As exciting as it is to play at Blazing Speed, it can really throw off my game.  And when I’m playing at that pace, I frequently miss the very best opportunities.  Often there’s a trade-off between playing at an exciting pace and playing to maximize points.  The best is when they go together, but that’s rare.  How many times in life have I failed to take advantage of a fabulous opportunity because I was so busy dealing with the day-to-day bustle?

2) On the other hand, if I play too slowly, looking for the perfect way to maximize an opportunity, I can stop the momentum of the game completely and that always results in really low scores.  Am I trying to arrange the perfect opportunity in life, and, therefore missing the merely great ones that go by?

3) I can be thrown off by a simple compliment.  When I have done something that results in a cascade of matches, the game will compliment me with, “Good! Excellent! Awesome! Spectacular!”  I noticed, for quite a while, I would get all flustered after the string of compliments, play badly, and decide that I was “jinxed” by the game.  Wow.  Do I do that in life?  Does someone’s recognition of my “awesomeness” throw me off my game?  Umm . . . Honestly?  Yeah, probably.

4) If I come to the game with any sort of strong emotion, I play terribly.  If my mind is full of  “I can’t believe he just did that!” I miss all kinds of things.  The best games usually occur when I’m in “the Zone”:  energized, but not thinking about anything in particular.  Completely in the moment.  How effective am I at anything —  how clearly do I see — if I come to it with a whole lot of emotional baggage?

5) I can miss things that are right in front of my face.  There is a “hint” feature to the game.  If I’m taking abysmally long to find a match, the “hint” will point one out to me.  Sometimes, embarrassingly enough, the match seems like it should have been obvious, but other times, even more embarrassingly, I still don’t see the match after it’s pointed out to me.  Sometimes it’s a particular color that I’m not seeing that day.  For some reason, it’s as if the yellow ones or the purple ones are invisible. I am particularly thrown by two almost matches close together. Seeing the “almost matches” as separate things, I don’t see what they can do together. What are my blind spots in life today? And what things that go together am I seeing as distinct entities? My spouse is desperately unhappy? My child is reacting badly to a food, supplement, teacher? My car is pulling to the left? The sky is a brilliant shade of blue?  The cat in my yard looks so desperate because she has two kittens hidden?

6) Sometimes, by the luck of the draw, or because of previous decisions made, or both, there just aren’t that many points to be had. Yeah, a better player than I could probably parlay a bunch more points from what they’re given, but even the best can’t do much with a board that offers only one match at a time. No matter how good you are, certain starting circumstances are going to limit your potential during the course of that game. Am I judging others based on the quality of the “game” they’ve been given, or the quality of the “player”? When it comes down to it, all I can really see is how the “game” is going, right?  Can I truly judge anyone’s quality? (And what am I doing judging others, anyway?  Didn’t Jesus say, “Judge not, lest ye be judged”?)

7) I can be distracted by other people’s scores.  The game compares your high scores with those of all your Facebook friends.  They’re reset once a week.  There’s always someone who’s had a better week and someone who has had a worse one.  Why should it matter to me what anyone else’s scores are? If one of them has an awesome week, that doesn’t keep me from posting my own personal best score.  Or if one of them has a dreadful week, it could be because they are dealing with things I don’t even want to imagine. When it comes down to it, their scores don’t affect my ability to achieve in any way whatsoever.

8) Watching my screen blow up can be very satisfying.  It actually does give me a bit of adrenaline boost.  Hmmm . . . Do I ever instigate destruction in other areas of life for the “pleasure” of watching it blow up?  When I was dating, post-separation, I would read profiles of men on dating sites that read, “NO DRAMA!”  And I would laugh.  There are certain times in your life, and certain circumstances, that are inherently dramatic (I know you know what I’m talking about), and if you seek to avoid those, you’ll have a stable, perhaps, but very dull life.  You can’t keep out the drama with a warning sign.  But there is a tendency for people to instigate drama, because life is just too dull without it, or because the drama distracts us from what we might have to feel otherwise, like fear, for instance.  I’ve definitely been on the receiving end of that kind of behavior.  (I had a boyfriend once who would start a fight at the end of every weekend we spent together, because he didn’t want to feel the separation anxiety he would otherwise have felt.  Need I mention that his avoidance of separation anxiety led to permanent separation?)  And, if I’m honest, I’m pretty sure I’ve done it sometimes, too.

10) If I miss something fantastic in favor of the ordinary, I am prone to dwell upon that.  If I do that — think about how stupid it was to miss that spectacularly good move — I can kiss the rest of the game good-bye.  Occasionally, I have missed something spectacular only to find something more spectacular down the road.   Yeah, I’ve missed opportunities in life, but if I spend my time dwelling on the missed opportunities, or berating myself for missing them, I miss the one that lies just ahead.

11) It’s good to have a strategy, but it’s also important to acknowledge that there will be times when the strategy will have to be abandoned in order to maximize the opportunities in front of me.

12) If I don’t keep my eye on the big picture, I’m perfectly capable of painting myself into a corner.  By doing the next urgent thing right in front of my face am I doing more harm than good to my overall “game”?

13) The better I am at predicting the consequences of my own actions, the more effective my strategy.  The best games are the ones where each action I take creates more and more opportunities.  It’s almost like the game rewards you for playing well by making it easier to play.  Life is like that, isn’t it?  Success builds on success.

14) But some games don’t reward you for playing well.  Sometimes I’m playing well — in the zone —  and I end up coming to a screeching halt anyway.  Life is like that, too, isn’t it?  I can be doing everything right and still have a really slow unproductive stretch.

15) Sometimes it’s worth it to blow the whole budget of “coins” on an expensive “power-up” when I know I won’t be able to get my “money’s worth,” just to watch my six-year-old son’s face light up as it does its thing.

What unlikely source of wisdom have you found in your life?

For more blogs by the Professor, please click here.

This entry was posted in Blogs by Thinking Moms' Revolution, Professor TMR and tagged bejeweled blitz, inspiration. Bookmark the permalink.

4 Responses to The Bejeweled Blitz Meditation