A few weeks ago, Cupcake posted her blog about stolen childhoods.  It was a powerful piece that lamented the things that our kids miss out on, not only our children with autism, but their siblings as well.  But it also spoke of hope and finding some of that lost childhood along the way. It resonated with a lot of people, including me.  I was all set to write about something totally different for this post, had the entire thing planned out in my head and I changed my mind because I was so moved by what I witnessed just the other night.

Rob has always been drawn to insects.  If it crawls, squirms, has a boat load of legs or flies, chances are he will be picking it up.  One of his favorite things to do in our garden is to look for worms.  He handles every living thing he touches with gentle, loving hands and a tender touch.  It is beautiful to watch.  He also has an amazing ability to nab these tiny creatures with his fingertips.  I once watched him grab a minnow out of my cousin’s hands at a lake with two fingers and his thumb.  Amazing!  Unfortunately, this ability got him into trouble this past weekend.  He successfully caught a honey bee midair as it flew around my mom’s lavender plant.  At least now we know he’s not allergic to bees.

He’s never said so, but I believe that fireflies are truly his favorite living thing.  He has always loved going outside and catching them.  Now you may say to yourself, “Well, that is the most typical activity that I have ever heard of!”  Under most circumstances, I would tell you that yes, it is.  Catching fireflies is a rite of passage for most children.  At least it is for most children who live in areas where these beautiful insects live.  Groups of kids running around laughing and trying to catch as many as they can to put in their jars is a common scene at this time of year.  Usually this takes a bit of teamwork, or it turns into a competition to see who can catch the most.

For Rob, this has always been a very solitary event.  The past few summers, he would go out and catch his firefly and hold it gently and 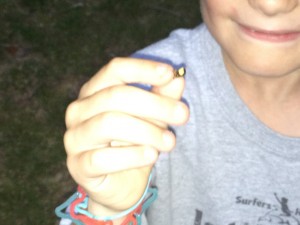 wander around the yard.  Sometime, he would catch two.  You could see him holding them so gently that every few seconds they would light up, almost telling him that they were OK.  He never hurt them, never squeezed too hard, and always let them go.   No interactions with his brother.  No discussions with us. No great excitement or production about it.  Just Rob and his firefly.

Sometime last week, we were at our garden and we saw our first firefly of the season.  Exciting!  The boys have spent the last week chasing fireflies around the backyard and putting them in jars with Rob announcing, “The fireflies are going to light up our room!”  They’ve been having a blast.

As Jon and I sat on our back porch watching our children experience one of the joys of childhood, it dawned on me that this is the most typical experience that my children have ever shared.  They were doing this TOGETHER.  They were interacting.  Rob would hold the fireflies in his unique way while Quinn opened the jar and he would drop it in quickly, careful not to let any out.  They worked together for an hour, capturing at least 15 or so for their room that night.

When did we make this type of progress?  When did it shift from Rob holding his firefly, stroking the light every now and then to make it light up while roaming alone, to something he does with his brother?  I am not sure when it changed, but changed it has.

I watched this beautiful evening unfold and made up my mind that this was what I needed to write about.  This typical childhood rite of passage that autism had taken from Rob, we have won back.  For those of you reading who have yet to watch your child catch his or her first firefly: please don’t give up.  Don’t ever give up hope.  Your fireflies are waiting.

Check out the site Firefly Watch that Cupcake sent me!  This is a fun family project for anyone whose kids love fireflies as much as mine.

9 Responses to The Fireflies