TMR was asked to participate in a study with A Major Difference, makers of the IonCleanse® footbath system for detoxification, to determine the effectiveness of the technology for treatment of the symptoms of autism.  This is the results of that study. To access a printable copy of the study in Word, click here, or PDF, click here.

The primary mission of TMR is to share their stories and inspire hope by spreading the message that biomedical and alternative interventions are effective in treating children with autism.

After being introduced to A Major Difference, Inc., of Centennial, CO.  AMD which manufactures the IonCleanse® Detoxification Footbath System, several TMR members used the machines with excellent results.  This led to the idea to conduct a study on the efficacy of treatments using ionic detoxification footbath technology.

AMD is a leading resource of toxin awareness and technology to cleanse and purify the body. More information is available through their website, www.amajordifference.com.

The basic protocol specified the use of detox footbaths every other day, for a minimum of 15 minutes per session, over a period of four months from January through April 2015.

A sample population of 28 children, with their families, volunteered to participate in the 2015 TMR study.  Four participants opted out of the study within the first 30 days. There were several families who had more than one child enrolled.

The active study was preceded by an evaluation survey conducted prior to initiating the footbath sessions.  The evaluation was then repeated at the end of each one-month period.  A total of 5 surveys per individual participant were completed over the four-month study period.

The survey results were collected and compared.  The data was statistically analyzed and displayed in a series of tables, graphs, and cumulative distribution curves, displayed later in this report.

The ATEC is a highly regarded assessment tool for the evaluation of children diagnosed as being on the autism spectrum.  The ATEC is specifically designed to measure treatment effectiveness.

The ATEC is not a diagnostic checklist.  It provides several subscale scores as well as a total score to be used for comparison at a later date.  The lower the score, the fewer the problems.

The ATEC is a one-page form designed to be completed by parents, teachers, therapists and other caretakers who have close observational experience with the subject.

It consists of 4 subtests:

Many parents and teachers use the ATEC to monitor how well the child is doing over time.  In addition, researchers have used the ATEC to document improvement following an intervention, by comparing the baseline ATEC scores with the post-treatment ATEC scores.

Since the primary function of the ATEC is to measure the efficacy of interventions, it is expected that a number of ATECs will be submitted for each individual periodically during the trial of the intervention, subsequent to the initial (baseline) ATEC.

Unlike most other tools, the ATEC is not copyrighted and may be used free of charge by any researcher.  Copies are available on request from the Autism Research Institute or at the ARI web site, www.autism.com.

Users of the ATEC may have it scored free of charge (4 subscores and a total score) by entering the responses via computer to the ATEC form on the website for immediate and free-of-cost scoring.  ATEC forms are only accepted online.

An explanation of how to interpret ATEC scores can be found at: http://www.autism.com/index.php/ind_atec_report

(by age from youngest to oldest) 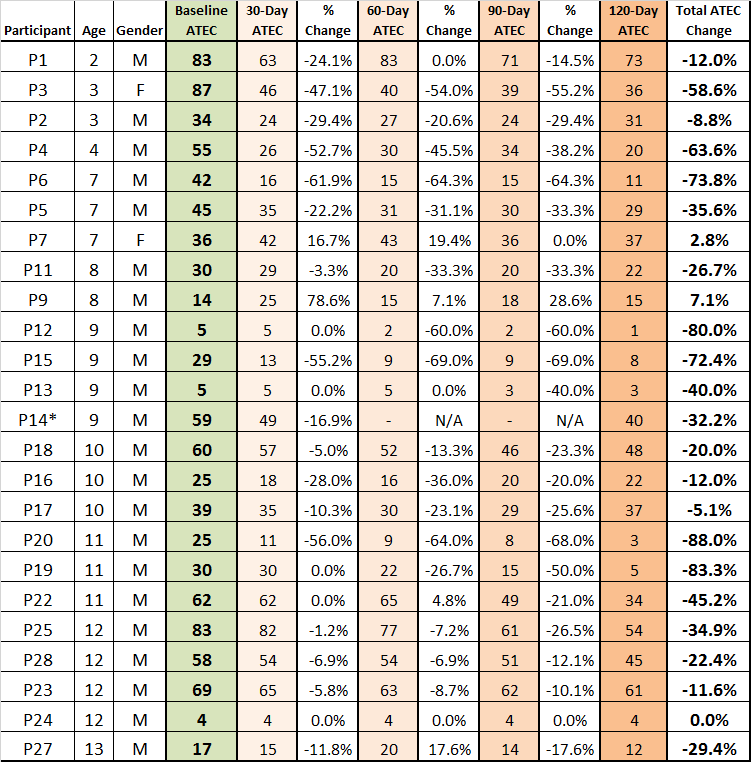 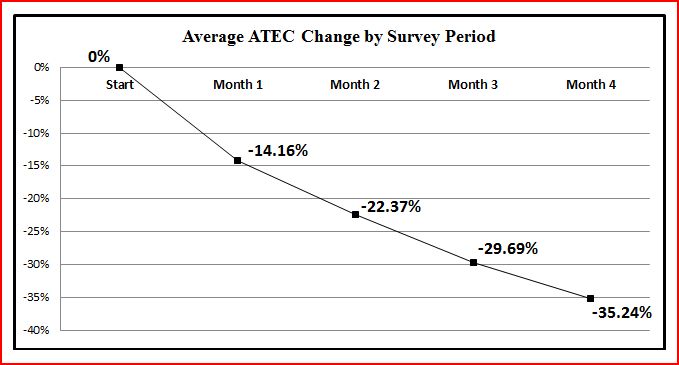 I. ATEC – On average, the greatest ATEC reductions occurred in subsequent months

II. AGE – Age does not appear to dictate results 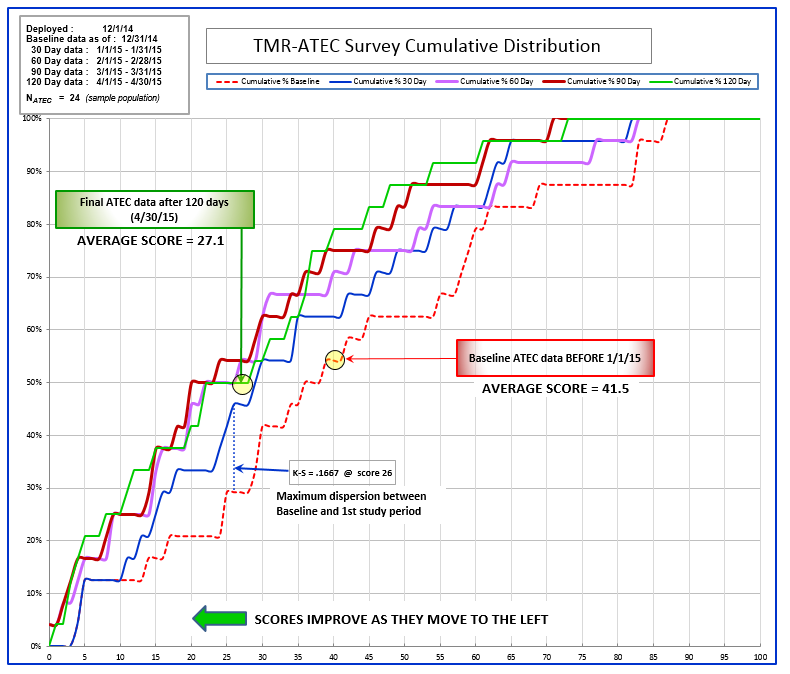 a. The data curves were smoothed but the choppy appearance is due to the low sample size. If the sample size had been larger, at 1000 or 10,000 data points, the plots would have been more evenly distributed, yielding symmetrical graph lines.
b. Trend lines are not necessary or helpful in this chart.
c. The direction of improvement is to the left. Lower scores = better results.
d. The K-S line = the score where the widest dispersion (greatest improvement) exists between two data curves.

a. The greatest initial improvement occurred at score 26, between the baseline and 30 day results.
b. Improved scores continued, at a lesser rate of change, through the 60 and 90 day periods.
c. The 120 day results were mixed within the same range as the previous 30 and 60 day data.

The efficacy of treatments using ionic detoxification footbath technology has been validated through the TMR-ATEC Survey.   Observed results, combined with mathematical analysis, have shown clearly that detoxification is an essential element in the autism recovery process.

The cumulative distribution of survey scores (Figure 3) illustrates the progressive nature of this protocol.  The chart shows the percentage of the sample (left axis) that has recorded a specific score (bottom axis).  The five separate curves show the scores of the sample group at distinct time intervals (0, 30, 60, 90, and 120 days).

The point of maximum scoring difference, between time intervals, was observed at score 26 between the baseline curve and the 30 day curve.  This indicates the point of greatest improvement during the survey period.  Note: “K-S” stands for the Kolmogorov–Smirnov test, which compares sample data with reference (baseline) data.

The ATEC is specifically designed to measure treatment effectiveness.  Lower scores indicate improvement of the individual participant.  The chart shows that the study group, as a whole, obtained significant, positive benefit from the application of this technology.  The curves moved steadily to the left during the survey period, indicating continual improvement of the group as a whole.

These results establish high confidence that continued use of the IonCleanse® Detoxification Footbath System can be used as an effective tool in the treatment of Autism Spectrum Disorder (ASD).

This entry was posted in Blogs by Thinking Moms' Revolution and tagged A Major Difference, AMD, IonCleanse, TMR study. Bookmark the permalink.