They say high-pitched screams, fevers and swelling at the injection site are all common, harmless, insignificant side-effects of responsible, preventative medical care.

They say kids get sick all time. Antibiotics are harmless.  Even if they are needed 5 to 10 times before a child’s second birthday.

They say strange, bright yellow, grainy and frequent stools (up to 20 a day) are common in small children.  It’s called toddler diarrhea.

They say lots of little kids get constipated.  It happens all the time. They have something to help. You find yourself giving that something to your child every day.  They say not to worry, she’ll grow out of it.

They say it’s just genetics.  The luck of the draw.

You say you think your child may be in pain.  They say he is not.

They say eczema is very common in babies. They outgrow it.

They say his head is bigger than it should be for his age, but no need to be concerned.

Some kids are late bloomers.

You probably let the older sibling speak for her.

They say SIDS–a word assigned to the unexplained death of an otherwise healthy child–has no explanation, no known cause. They say this even when a child receives preventative healthcare just day,even hours,before their death.

They say DAN doctors are shy-locks.

They say homeopathic intervention and CEASE therapy is witch-doctoring.

They say that every child is a candidate for immunization regardless of what is known about their genetic predisposition to developing asthma, allergies, autism or auto-immune disease.

They say mast cells, cytokines, oxidative stress, immune function, viral load, metabolic and methylation dysfunction have nothing to do with the brain disorder they call autism. 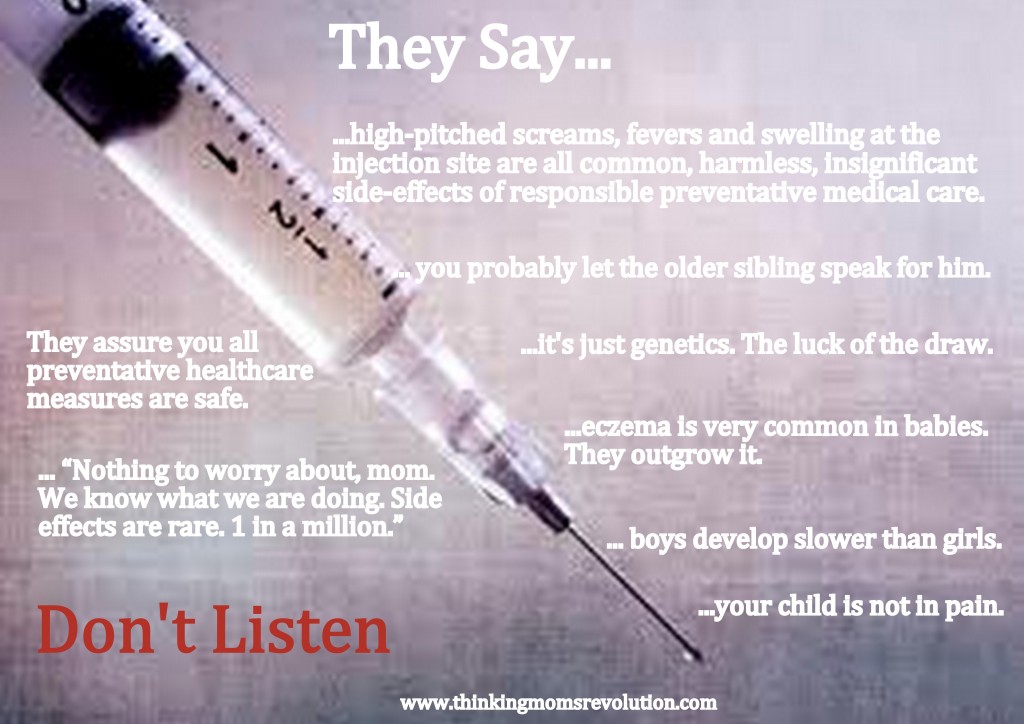 They say pills will help calm a sick child’s constant hyperactivity (and give you a much needed break).  They say they will have to up the dosage frequently because bouts of violence are quite common when the pills lose their effectiveness. They say you’ll want to keep on top of the prescription(s) especially since the pills suppress the neurological signals that indicate when the child is full, so by the time she reaches puberty your violent child with brain and central nervous system damage will also be struggling with obesity. Not to worry, they say. They have a pill for that, too.

They assure you all preventative healthcare measures are safe.  They say, “Nothing to worry about, mom.  We know what we are doing. Side effects are rare. One in a million.”  That’s what they say.

Thinking moms and dads understand the great comfort built into the word “rare.” We were the enthusiastic parents that took great comfort in the “one in a million” statistic our pediatricians provided as their nurses swabbed our babies’ arms and legs to stick them 4 times with 9 different diseases that have never been tested for combined efficacy. “Rare” helped us lay our heads on our pillows at night and sleep peacefully.  A baby, yes. Maybe two or three.  But, more than likely, somebody else’s baby.  Unless of course, it is your “rare one.” Hundreds of thousands of thinking moms and dads parent “the rare ones,” in the United States alone. Those of us who are lucky enough to still have our children; our chronically-ill, immune-compromised, viral-overloaded, central nervous system-damaged, brain-damaged, bowel-diseased, heavy metal-poisoned children.

With all the talk of rarity, one would think these few martyrs of the CDC’s vaccine schedule would have their lives publically honored on a yearly basis. Great charities benefitting chronically ill children would be founded in their names. Their families would be held in the highest regard, their sacrifice acknowledged, their stories told.  Matt Lauer, Oprah and Andersen Cooper would be clamoring for a chance to interview these rare families and capture their real story of ultimate sacrifice for the global village. Celebrities of the highest caste would entertain us during elaborate, televised galas on a national holiday commemorating their lives. If what they say is true, this would be the case. Doctors and scientists from all over the world would come together to talk about the strange and unheard of phenomena that occurred in the bodies of the few who gave their lives for the world herd.  Their findings, after analyzing these rare deaths/chronic illnesses would be highly respected, critically acclaimed, published in the most notable journals, discussed thoroughly among the most prestigious members of government, medicine and science.  Indeed that is what would happen.

If what they say is true.

America ranks 38th in the world for childhood mortality rates.  More babies in Poland and Czechoslovakia live to celebrate their 5th year of life, than in America.  We are the most vaccinated and chronically ill population in the world (rivaled only by the UK).  Thinking Parents know what is happening to our country and to our world.  We read the studies, we read the legislation.  We read MSD sheets, food labels and package inserts. We investigate what we are told.  We investigate the science, the politics, the law. We talk to researchers all over the world.  We network with each other.  We find solutions. Autism is an auto-immune disorder that often has iatrogenic roots.

According to the media, there is no science that supports the autism-vaccine link.  In 1954, there was no science to support the notion that smoking caused cancer, because those in power actively suppressed the efforts of those trying to uncover the truth. The media then, like the media now, had bills to pay and advertisers to please. Silver-haired doctors graced the covers of magazines smoking their favorite brand of cigarette.  But adults, even under the haze of addiction, have the faculties to choose to or choose not to smoke.  A baby only hours old cannot decide whether or not he would like a vaccine that is meant for prostitutes and IV drug users.  A vaccine that wears off before he or she even becomes sexually active.  A newborn cannot decide that. Please read Ian’s story here.

When the people in power stop listening to the people they serve, the most unfortunate and despicable events in human history repeat themselves.

Saddest of all?  Autism is just the beginning.

We are begging you.  LISTEN.

* For more blogs by The Rev, please click here

39 Responses to They Say