Where The Magic Happens

Posted on May 4, 2012 by Thinking Moms' Revolution

Have you seen that picture that’s been making the rounds on Facebook: two circles, one labeled “your comfort zone,” and another labeled “where the magic happens”? The joke, of course, is that the two circles don’t intersect. They don’t even touch each other. I laughed the first time I saw it. Instant recognition of a nearly universal truth: All the magic happens when you step out of your comfort zone. 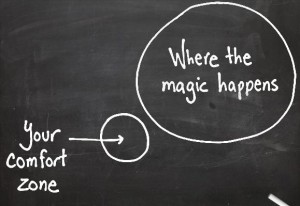 Take this blog for instance. We’ve all been marveling at how smoothly this thing has been going. After all we only started up on February 9th. (Oops. Maybe I should have whispered that part . . .)  Anyway, we may seem like a group of supremely confident people who were just destined to have a popular blog (I’m imagining all the Thinking Moms giggling like schoolgirls at that line — all except The Count, of course.), but the truth is we’ve been operating way out of our comfort zones for months now. Goddess asked us to write chapters for a book. We did. That was a little uncomfortable but not too far out of the comfort zone for a few of us. But then she asked us to edit each other’s chapters. Whoa.  Um . . . edit? Our friends? Um . . . okay . . . All right, book pretty much accomplished. Now what? Well, now we’ve got to sell it to someone. We’ll need a proposal, an agent, and a publisher. Unless of course we do it ourselves. Well okay, how do we get an agent and a publisher? Someone said we should have some kind of online presence to let people know who we were and build some kind of following that we could point to when we get to meet with an agent or publisher. Then someone suggested that we do a blog similar to ones we’ve seen elsewhere, where the members contribute on a rotating basis. Great idea!  Anyone know how to do that? *crickets*

Eventually, LuvBug took it on herself to hack out a site prototype using WordPress, a popular blogging site. Eventually, she got a little panicky being so far outside her comfort zone, and Sunshine took up the gauntlet and together they beat it into shape. Suddenly, there was a sign-up sheet. Choose a day and submit a blog! And we were off and running.  We still had no friggin’ idea what we were doing — but we were doing it! And every time we came up with an idea or a need we found someone with just enough knowledge to get us going. The site needed a logo. Princess is studying graphic design and volunteered to give it a shot. And — like magic — we have a logo! Blaze has a contact who can get T-shirts made for us. DragonSlayer has become the webmistress to die for. I’m serious here. She talks to geeks daily and has already engineered a smooth migration from WordPress because we outgrew them!

I’m on the book committee and one of my jobs is to try to determine the best way to get this thing published. I’ve had a good friend who is an amazing editor for years now. Our thirteen-year-olds met in a gymnastics class when they were three. One of my forays outside my comfort zone was to approach her and ask her to brainstorm with me how she thought we could get the book off the ground. I’m good with people, but not so good at asking them to help me. Well, turns out this editor friend was very, very helpful. Gave us lots of advice and information we never could have come up with on our own. Just might make a huge difference in difficulty and timing of publication. Magic? You bet!

A few days later, I got an email from her about a friend of a friend who was an autism mom raising money for a short film about autism, called Six Letter Word. Did I think we could post her link?  I loved the idea from the get-go, but couldn’t determine from the video what this woman’s slant was on autism. If she was in the “it’s a genetic thing that you can’t do anything about” camp, chances are good posting her link could turn around and bite us in the butt. So, my next step outside the comfort zone was asking my editor friend if she knew what this woman’s slant was. Her answer was if it’s a big deal, just forget it. But, I said we’d really like to help her get her movie made if she’s not constitutionally opposed to what we do. So, she contacted the filmmaker through their mutual friend, and I — doing something I don’t ordinarily do — sent her a message on Facebook also, introducing myself and saying that I belonged to the Thinking Moms’ Revolution and we’d like to help, if possible, but wanted to make sure she wasn’t going to denounce us as crazies  Think about how you would say that to someone you don’t know for a second, and you might be able to imagine just how far outside my comfort zone I was.

The filmmaker’s name is Lisanne Sartor, and she contacted me right away saying that she had visited our website and was very impressed.  She’d love to speak with me if that was okay. (Already I’m breathing a sigh of relief.) She’s in L.A. (after all, she’s a filmmaker) and I’m in New York, so we had to figure out time zones and all. I’ve never been much of a phone person, and after a stint at the Classified department of the New York Times, I’m even less of a phone person than I used to be. It’s so hard to read people on the phone, it’s almost exhausting. So, here I am on the phone with this woman I don’t know, and who makes me jealous on principle — did I mention she’s making a movie? — and God knows how it’s going to go.

So, how DID it go? Great. We clicked almost immediately. Lots of similar issues in the kids. Lots of similar interests in our lives. We’re both big believers in the “you do what works” school of medicine, and “if you’ve met one person with autism, you’ve met one person with autism.” She’s funny, and lovely, and smart, and, well . . . a Thinker. And she’s making a film that she has written, and will be directing, and feels passionate about because one of her own sons has autism. She’s been an assistant director before. Went to UCLA grad school for screenwriting (third prize winner of the Samuel Goldwyn Writing Award) and has written things before too (including an intriguing script based on a children’s book named Monster Mama, by Liz Rosenberg).  She’s even directed a few things, but never has she written a short film and directed it. And she’s doing it now as one of eight women in the American Film Institute’s Directing Workshop for Women —  on the most personal project she’s ever been involved in. Talk about stepping outside your comfort zone!

I asked her what she saw as the scariest aspects of what was coming up for her. Her reply:  the fact that she is responsible for the whole vision of the film. That’s huge. She has to be able to create her vision by choosing the right people and communicating that vision clearly to them. She’s afraid that it’s possible she won’t be able get across to the actors what it is she needs from them to fulfill her vision. (Here’s where I offered to help. I have an acting background and said she could feel free to bounce anything off me, and I would tell her how it would hit me as an actor. We actors are creative and passionate, but we can be touchy as hell!) She’s afraid that directing a child will be a huge challenge. After all, at home she can just tell her kids what to do. Getting a good performance, especially out of a kid, just doesn’t work that way. She’s afraid that she might have trouble being clear. I found that word “clear” interesting, and asked her what her ethnic background is. I wondered if there was a cultural component to any difficulty she might have around clarity. (I’m Irish and the whole “gift of blarney thing” is true. The Irish can talk around a subject for hours, and you still won’t quite know what was discussed. It’s amazing I ever learned to be direct about anything.) Lisanne is Italian and thought it was quite possible that her cultural background had something to do with her fear of not being clear. As Italians, everything in her house growing up was loud, but loud doesn’t necessarily mean clear.  Sometimes raising the volume is a great technique for  hiding what’s really going on. (Is there anyone whose brain can’t think of a dozen examples of that off the top of their head?)

After we chatted some more, I discovered that Lisanne had the same difficulty asking for help that I do. No movie ever got made without being a huge collaborative effort. She’s going to need a lot of help in every aspect of this film. When she mentioned her fear around directing a child, I thought of Steven Spielberg, whom I consider to be about the best director of children ever. I asked her if she would consider reaching out to him for tips on how to direct kids. She assumed he wouldn’t be interested, but I said, “You don’t know that, do you?” I challenged her to take a huge leap outside her comfort zone and find out if Spielberg might be interested in helping her. After all, what did she have to lose? And look what she could gain . . . magic!

As we talked I wondered what it was about being outside that comfort zone that made things so scary. It occurred to me that we all know there are many people out there afraid of our magic. They’ll do whatever they can to send us scurrying back to our comfort zones to lick our wounds. When you encounter someone like that, one of the most courageous things you can do is be your own cheerleader. To remind yourself, when it comes down to it, the upside potential of your investment in yourself is much greater than the potential loss (that person was never much of a friend anyway, right?).  Another tremendously courageous thing to do is to cheer on others who step outside their comfort zones in pursuit of magic — especially if they happen to be doing exactly what you’ve imagined doing!

I believe if we cheer on those courageous enough to make magic happen  — and convince others to do the same — the world will have a whole lot more magic to go around. And that strikes me as a wonderful thing.

Let’s make some magic together.

18 Responses to Where The Magic Happens