Please scroll down the Menu tab to watch original videos produced by The Thinking Moms’ Revolution. 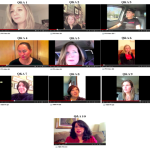 Read our Blog and join us daily as we forge forward, hand in hand, into a future full of hope.

One Response to Our Videos